Adult in execution but childlike in its enthusiasm 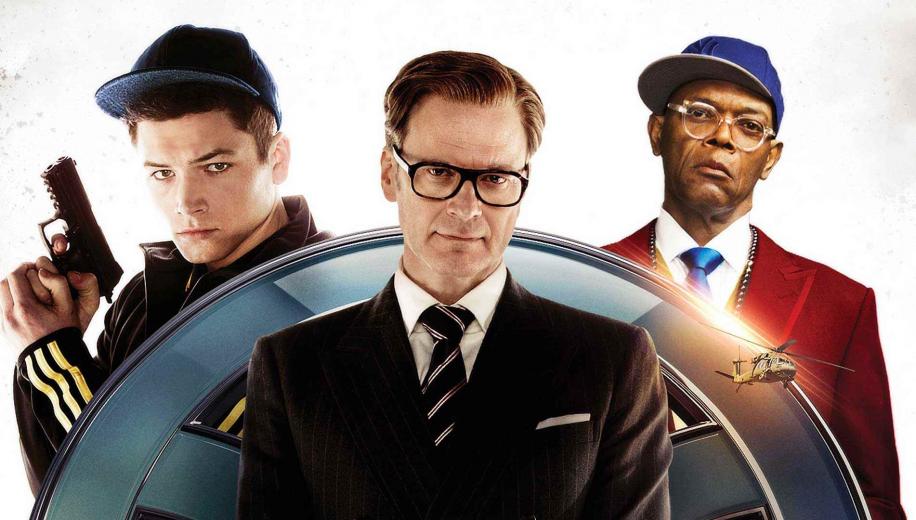 The suit is the modern gentleman's armour. The Kingsmen are the new knights.

Director Matthew Vaughn’s third comic-book film Kingsman: The Secret Service is also a homage to old school spy films (60’s Bond principally), with megalomaniacs, gadgets and cars, while telling a Pygmalion story of disenfranchised youth being brought into a world of privilege. Incredibly it succeeds on every level. The story follows 'Eggsy' Unwin, an urban youth from South London, squandering his exceptional talents due to his under-privileged upbringing being trained as a super spy in the Kingsman group of Gentlemen. His training is under the tutorage of Harry Hart, who’s connection to Eggsy involves a failed mission which cost Eggsy his father. Once paired the two bond in a father/son relationship allowing Eggsy to blossom, whilst in the background megalomaniac billionaire Valentine threatens to wipe out mankind, save a select few, under the guise of saving the planet.
The plot is actually fairly basic stuff, and hits every familiar point to get to its ultimate conclusion: gruff beginnings turn to friendship, underdog wins the day, sacrifice and betrayal are all present and correct. But where the film wins out is with its attitude; Vaughn’s delivery of the story seems fresh and inspired. The casting of Taron Egerton and Colin Firth (as Eggsy and Hart respectively) is inspired; the former bringing a youthful swagger and energy and the latter seemly in the role he was meant to play! Indeed the film has a momentum that seldom lets up and plays very much to an adult audience with its language, set pieces and attitude. However, it wants to have its cake and eat it, so while it is hyper violent, it is seldom bloody, whilst the themes are mature they are accessible, making it undeniably adult in execution but childlike in its enthusiasm. Kingsman: The Secret Service was filmed digitally using the Arri Alexa XT Plus camera at a resolution of 2.8K and was finished using a 2K Digital Intermediate (DI), which presumably formed the basis for this Ultra HD Blu-ray release. The film was upscaled to 3840 x 2160p and presented in its correct 2.39:1 aspect ratio. The disc uses 10-bit video depth, a Wider Colour Gamut (WCG) and High Dynamic Range (HDR), and is encoded using the HEVC (H.265) codec. We reviewed the region free UK Ultra HD Blu-ray release of Kingsman: The Secret Service on a Panasonic 65DX902B Ultra HD 4K TV with a Samsung UBD-K8500 Ultra HD Blu-ray player.

The detail on show, from skin texture to mountainous terrain, from service gadgets to city flyovers, from clothing weaves to London streets is pin point sharp and holds keen edges excepting some softness in the original source from lens choices. Perhaps the sharpest edges would be the news headlines that scroll along the bottom of the TV screens, and these show the most improvement over the standard Full HD Blu-ray, as close scrutiny reveals slight improvements (dust and sand grains, brickwork, railway aggregate) in terms of the overall detail level.


Colouring, with the benefit of HDR, really brings the film alive

Colouring, with the benefit of HDR, really brings the film alive, by giving such a natural feel to the image that you feel like you are there; flesh-tones fare particularly well. Indeed this UHD moves away from pushing the format to show off what it can do, in favour of a far more relaxed, but nevertheless realistic look. Thus, trees, skies, streets, cars all look real enough to touch. When Eggsy is leaping across his building tenement, the concrete walls, iron railings and beaten up doors have a texture and look that is second to none. All the primaries are wonderfully represented and provide heaps of eye candy. And when the image needs to push the envelope, it does, such as all the head explosions with their brightly lit and vivid colours. One slight downside, the green-screen elements can look even more pronounced at times.

Thanks to the HDR grading brightness and contrast are set to give a very strong black level and adds depth to the image, showcases shadow detail when needed (check out the dark suits) and is impenetrable when required with no signs of crush or noise. Whites are equally strong with no signs of clipping. Digitally there are no signs of compression issues or banding and neither is edge enhancement a problem and, given its digital capture, the source is as clean as a whistle. Sadly there is no immersive audio upgrade for this release, but the DTS-HD MA 7.1 track that adorns the Blu-ray is replicated on the UHD disc, and it is blistering. Making full use of the surround environment with regard to effects and ambience the surround speakers are in near constant use, with pin point steering to mirror the on-screen action. The action set pieces mark the best use (the church scene, Eggsy’s storming of Valentine’s stronghold etc.) where gun shots, shouts, explosions, stabbings, kicks and punches pummel you into submission. Bass is strong and tight throughout with plenty of LF effects to rock the core. There are plenty of realistic elements too, such as wind rushing past in skydives, or traffic noise in London. The score comes through bold and strong, sometimes a little too hot where some action effects, or dialogue, gets slightly lost in the mix (stylistic choice no doubt). Dialogue itself is clear and coherent, sounds very natural and given all the directionality it needs when not confined to the frontal array. All the extras are housed on the included Full HD Blu-ray disc and are the same as that standard release.

Kingsman: The Secret Service Revealed – Is a lengthy 90 minute documentary delving into all the behind the scenes aspects of the making of the film. Divided into six featurettes, each one looks at a separate item and plenty is covered. The titles are: Panel to Screen: The Education of a 21st Century Super-Spy, Heroes and Rogues, Style All His Own, Tools of the Trade, Breathtakingly Brutal, Culture Clash: The Comic Book Origins of The Secret Service.
Gallery – Galleries of images from the film divided into three: Behind the scenes, Sets and Props.
Trailer Kingsman: The Secret Service is a spy film, in the vein of 60’s Bond, but brought right up to date with an enthusiastic cast, zippy pace and adult setting told with a childlike passion. The story is of a gentleman spy training a streetwise youth and how under-privilege is no excuse for failure. A simple story told with vigour becomes an undeniably fun ride, with wild stunts, comedy, full-on violent action (and consequence) and emotional involvement that quickly demonstrates how to put the joy in enjoyment.


Puts the joy in enjoyment

As a 4K Ultra HD Blu-ray, Kingsman: The Secret Service from 20th Century Fox is excellent; the disc is superlative with is picture presentation being very detailed, bright and bold with HDR being used to being out the natural essence of the picture. Whilst the DTS-HD MA 7.1 surround track might not be the latest all speaker incumbent it still provides a superb surround experience with plenty of ambience, bombast and effects. The feature length making of documentary fills out the extra features nicely.