Nobody was eagerly anticipating the 4K release of this 2016 videogame prequel movie, but it's a damn good fantasy romp nonetheless. 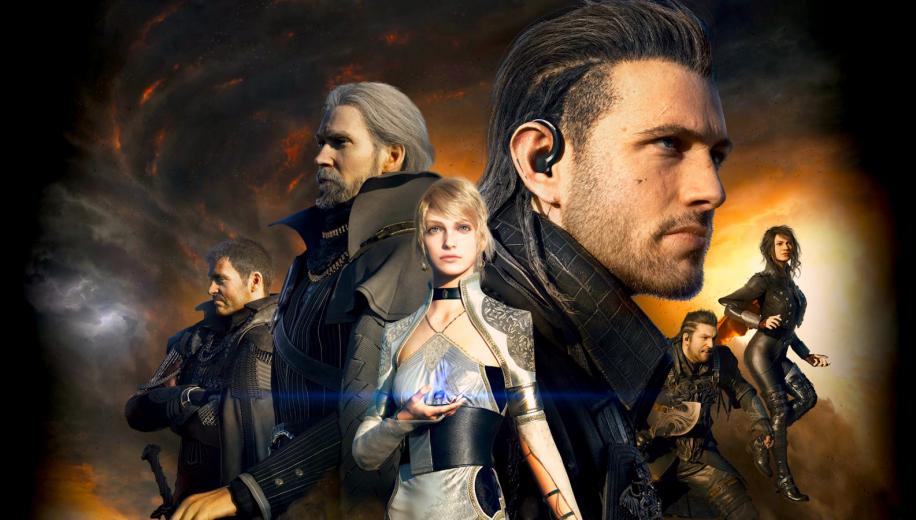 Unlike its predecessor, Advent Children, this surprisingly exciting Final Fantasy entry is a great jumping-in point, even for complete newcomers.

It's likely quite intimidating coming into a series with a whopping 15 instalments and hitting the ground running. It would probably be a little like watching a Game of Thrones movie without ever having seen any of the series. So it's doubly impressive that Kingsglaive accomplishes the seemingly impossible - providing a tremendously rich backstory to the 2016 videogame whilst also remaining almost completely accessible to complete newcomers.

Sure, the lore is strong with this one. Hell, the Final Fantasy games would be nothing without their visuals and their lore, and Kingsglaive goes deep. But if you hold on tight through the dense intro, the rest just expands into a whirlwind ride of warring empires, peace treaties, betrayals and massive scale conflict involving increasingly big monsters. The kingdom of Lucia holds a magical crystal which protects their people from the rising empire of Niflheim, using an elite group of powered knights - the Kingsglaive - to fight a seemingly impossible battle against their technologically advanced opponents. With a peace treaty in the offing, could this be the end of the war, or is it just the start of another one?

A bloody enjoyable videogame romp, better really than it has any right to be, and thoroughly enjoyable even stripped of its FF15 subtitle

Enjoying a rich voice cast - the lip movement was done for English dialogue - including the likes of Aaron Paul (El Camino, Westworld), and Game of Thrones stars Lena Headey and Sean Bean, Kingsglaive is itself actually very Game of Thrones in setup, only blended with part-Star Wars prequels, part-Godzilla vs. Kong city-destroying carnage and featuring a protagonist whose powers are basically the same as those in 2008's Jumper.

Watching the lead character Nyx hop around the landscape using a magic-infused blade he slings in every direction embraces all of the untapped potential you may or may not remember from Jumper, and then some, but that's even before the massive scale battles involving fiery beasts, Starship Troopers bugs, heavily armoured Steppenwolf-esque antagonists and rain-hell-from-the-sky airborne dreadnoughts that would likely take out a SHIELD helicarrier with one shot. And the lore may be dense, but it's richly painted, as Sean Bean's noble king attempts to keep his kingdom alive against all odds. It's a bloody enjoyable videogame romp, better really than it has any right to be, and thoroughly enjoyable even stripped of its FF15 subtitle.

As already noted, the Final Fantasy games ride or die on their visuals and their lore, and this movie prequel - from the game-maker's CG effects studio - defies its 2016 production date to still look staggeringly good even today. Detail is fabulous, right down to the wisps of hair, facial tics and expansive landscapes, and perfectly rendered fantasy creations. There's a blistering amount of visual information in several of the scenes, as magic erupts, time stops and glass shatters in a thousand pieces strewn across the frame. If you've ever seen a Final Fantasy game, you know just how spectacular the visuals are, and if you haven't, well you're in for a real treat with this visually opulent release.

WCG and HDR do some heavy lifting too, as giant Magitek creations and daemons ravage across the city with fiery lava glowing at their core, blue electric energy erupts as Nyx leaps through portals created with this spin of a blade, or the airships rain red-orange bolts from the skies. It's epic, and the piercing highlights are cast perfectly against the rich, inky black backdrop and bottomless shadows. It's a faultless presentation, just about as perfect as anybody could have possibly hoped for, and then some.

Let's just be clear about this, for those concerned about watching this in the "original native language", Kingsglaive: Final Fantasy XV was crafted with English language lip movement, and synched in all other languages (including what most might assume was the 'native' Japanese). So the correct language option is English, and the mouth movements match because, well, the characters are supposed to be speaking English. Now we've gotten that out of the way, suffice to say the dialogue is rendered clearly and coherently throughout, and given priority across the array - and the increasing maelstrom - where necessary. The score is sweeping and thoroughly effective, giving the surrounds plenty to engage with, although they're not really left wanting given the effects on offer, from magical portal-jumping to powered shields, city-crushing creatures, furious car chases and epic battles between vast armies. It's thoroughly immersive, engaging and atmospheric, with nice edge in LFE kick and superb dynamics.
﻿

Sony's UK 4K release of Kingsglaive: Final Fantasy XV throws in a decent selection of extra features, although unfortunately none of them make the 4K disc itself, which comes sporting one of the worst static menus of recent time, like a 360p version of the banner image in the review.

A decent selection of extra features

The Blu-ray includes a number of Featurettes, looking behind the voice cast, the motion capture, the world building and design, and the score, rounding out the package nicely.

Kingsglaive: Final Fantasy XV is hardly the first title that would come to mind if you were wondering about what back catalogue titles might land on 4K next, and is possibly near the very bottom of the list, but it's a great little videogame prequel, with its own relatively standalone story that has been somehow - impossibly - crafted to be inclusive even for those with precious little familiarity with the long-running videogame saga.

Sony's UK 4K release of Kingsglaive: Final Fantasy XV boasts an absolutely stunning 4K presentation which, whilst likely not a surprise for fans of the games' visuals, is still great news for 4K disc fans, with a soundtrack that's almost as impressive and a few nice extras too. This one is worth checking out. Now where's Final Fantasy: Spirits Within's 4K release?