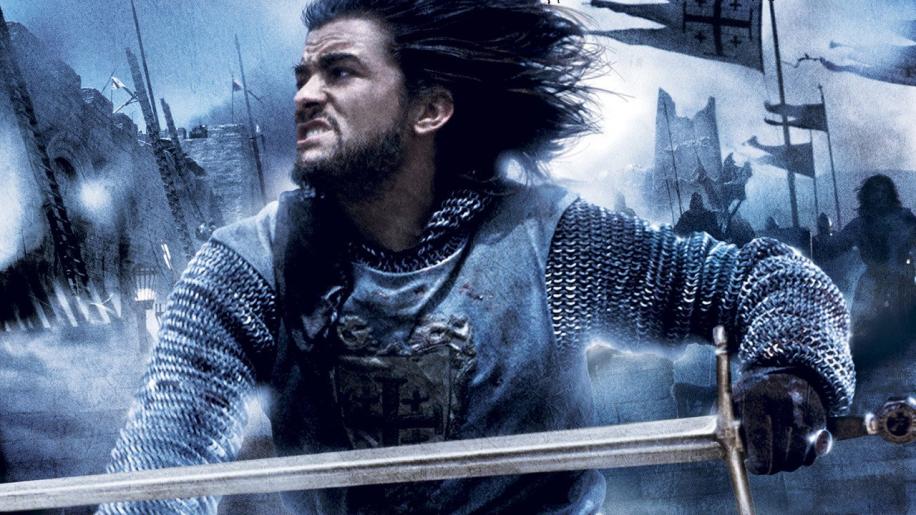 Let me be up front about this - I think that this movie could very well be a love it or hate it affair.Ridley Scott has made some very influential movies in his time, from Alien and Blade Runner to Black Hawk Down and Gladiator, he has his fans and has arguably made a lasting impact on cinema but on the flipside, he's also responsible for G.I. Jane and Hannibal. In my eyes, we can add this to those latter movies.

Our tale, should you wish to call it that, revolves around Balian (Bloom), a blacksmith whose wife has committed suicide due to the loss of their child. His father, whom he's never known, returns to encourage him to go to Jerusalem with him, which he initially refuses until certain circumstances force his hand. At Jerusalem, there is a pact of sorts with the Arabs, where the Christians (primarily English) are holding Jerusalem while the Muslims are outside of its walls. The peace is kept between the two sides by the King, however he is dying of leprosy, but this view of peace isn't held by all and an attempt at a war is made while the King lives, however the King's days are numbered and when he dies, the very person who wants a war, is going to get one. Balian decides he's not going to help this new King, mostly due to an assassination attempt on him, so when the King's attack fails spectacularly, it's down to Balian to protect Jerusalem and the people behind it's walls.

Sounds like an epic tale with epic battles doesn't it? Well the film suffers 3 distinct problems which I'll quite merrily explain.

Firstly, the cast. Orlando Bloom can't hold a lead role. Sorry all you Legolas fans, but reality check time, he has no on-screen presence and no charisma. Orlando Bland would be a much better suited name, as he's clearly better as a member of an ensemble piece where limitations can be hidden and positives accentuated. OK if that's not going to get me hate mail, the next one might.

Secondly, the movie clearly has robbed other films, including Scott's own work, but it never lives up to the standard of the movies it steals from. It wants desperately to be an epic like Gladiator, but it doesn't endear to me as much as that movie did. Scott has lifted music for this film that he's utilised elsewhere (Hannibal) and the end siege/battle looks just like the end battle from The Two Towers sans orcs. I'm not just talking that it seems similar; I'm actually meaning it looks practically the same, just not completely at night. Even the sword battles seem to be practically ripped from Gladiator, even down to his own filming style, it just seems to lack any form or innovation. Yes I know he made Gladiator, but that doesn't mean he should rehash it under another name, does it?

Third and final problem, which may just be me, but I went into this totally blind and for virtually all of the movie was wondering what the actual story was. I may be seemingly harsh, but I couldn't see the point of it all. If it's effectively a recreation of a battle, well ok fair play, but if it's something deeper and more meaningful, I'd have liked to have a remote clue. I could tell you the whole “plot” in one sentence and you'd have as many questions as I have, namely what was Balian trying to accomplish? He had no reason to get his sins forgiven as was indicated, as he had lost all faith in God, so nope not buying that. He had no reason to follow on to Jerusalem after his father dies (not a spoiler there, it happens in the first 20 minutes), so is it just pride of carrying on his fathers' name, although he'd only just met him? Nope, still not ringing comfortably with me. Once you eliminate redemption and pride, there's no real reason for him to continue or for him to make a good knight, after all, he reminds us he's only a blacksmith. Even, when all is said and done, if you find a semblance of a plot, it's boring. No. let me rephrase that, it's mind-numbingly slow, boring and pointless. I'm sure I'm in a minority and people may well argue that I didn't get it, or I prefer simpler movies or - heaven forbid - I'm a Stallone/Norris/Seagal action movie lover. It's none of them - I prefer his more well-renowned work, I love his brother's movie “Man On Fire”, which takes half of its running time before the act of vengeance kicks in, I loved the dynamic of establishing the bond between Creasy and Pita - I digress, but I say this to illustrate my frustration for this movie, because we have no bond to establish, no coherent reasoning for his actions until the final battle, but by that point, I was beyond caring.

In terms of direction and presentation, it's business as usual, with Scott's flair for certain shots, even semi-ripping off bullet-time by slowing the action down during an intense battle and speeding it back up to real time, but for all the style, gloss and amazing sets, like Pinocchio, this movie's heart is wooden. I'm sure some people will like it, but then some people like Chuck Norris movies. Me? I'll pass on both thanks very much.