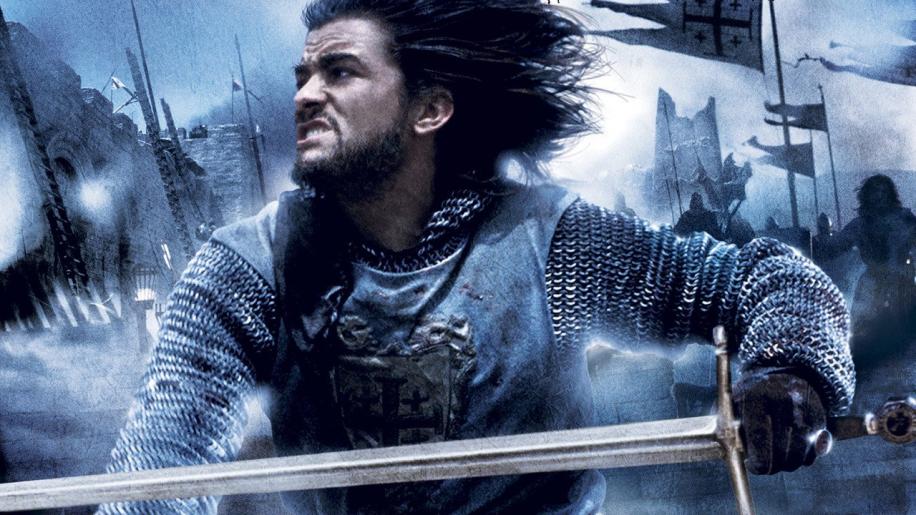 No surprise here, it's a stunning transfer by Fox with a theatrically correct 2.35:1 ratio anamorphically enhanced for widescreen. To think that Fox were the last studio to sign up for DVD, then they brought out an abysmal first disk, the non-anamorphic Titanic and now they have, arguably, some of the best transfers around. We have a transfer that has no grain to it, no damage to the print used, no artefacts and only some slight edge enhancement. Black levels are deep and never lose the detail where it is needed, flesh tones are suitably impressive, from the paleness in England to the tanned, darker skin of the Muslims. Indeed the detail levels are so good, you can see the beads of sweat on Bloom's forehead when he is striking metal in the opening scenes. The bright colours from sands to flames are bright and vivid without any noticeable bleeding showing and certainly no halo's either. Top transfer.

Containing both a Dolby and DTS 5.1 mix, we have quite an engaging soundtrack. Dialogue is nice and clear, with a natural sounding timbre to it, more so with the DTS track than the Dolby. Music is present frequently and fills the room nicely, as do the effects during the battles, but it is also true of other scenes - for example when we first meet Balian, the fire whooshes and the echoes of the metal being struck reverberates nicely. But it really kicks it up a notch for the siege scene at the end - with arrows whizzing and deep LFE from the ballista's flaming rocks crashing down, it is definitely at its liveliest here and would arguably be a good scene to use for a demo of your system.

On disk 1, our sole extra is the Pilgrim's Guide, which gives a subtitled fact track while you are watching the main movie. I watched the movie once, so please don't be offended while I pass for a second time around. The Inside Look at “Tristan And Isolde” was short, but based on this, isn't something that I'd bother looking for on its release.

Disk 2 starts up with what's called the “Interactive Production Grid” - it's a grid which gives you access to various featurettes by subject - Directing, Crew and Cast in the 3 stages of movie making - Pre, Prod, Post. So effectively you have 9 featurettes, but I'll be honest, after watching the movie and being bored, then watching the first 29 minute Directing/Pre production, I'd given up. It's so dull and dry it's only going to appeal to a real, real small amount of people, because it's just so bland. We have a 43 minute documentary called “History vs Hollywood”, a TV documentary which, discusses at length, how accurate (or not) the portrayal of the movie is in line with history and what historians thought. It's interesting enough, provided you like the movie and even more so, the subject matter. We then have a 45 minute documentary “A&E MovieReal”, which is effectively more of the same. Finishing off the disk we have 4 Internet Featurettes (I assume they were from the website) and a theatrical trailer. I apologise for not viewing all the featurettes, but they were practically inducing me into a coma. I can't lay a fault with the extras, in terms of the amount or quality - however, they truly bored me rigid and may well do anyone who either dislikes the movie. Therefore, to be as fair as I can, my mark will reflect the quantity and quality of these for people who would be interested in them.

Part of me wanted to render my verdict in 3 words, paraphrasing from the movie This Is Spinal Tap what a critic wrote about their album “Shark Sandwich”. Alas, I can't do this, but believe me the sentiment is there. This is without a doubt, an incredibly dull movie until the siege - which is good, but we've seen it before almost scene for scene, between Gladiator and Two Towers. While the picture and sound are very good, there's nothing here to grab anyone's attention and even the most ardent fan of history should have a quizzical look as to how flimsy the plot is. Maybe it was the means to an end (i.e. to display the battle) but in all seriousness, if you've got little story, you need someone charismatic to hold your attention on the screen, Mr. Bloom is most certainly not the man for this task. Kingdom of Heaven? Kingdom of S....