The Pursuit of Happyness 2: The Plan for Greatness 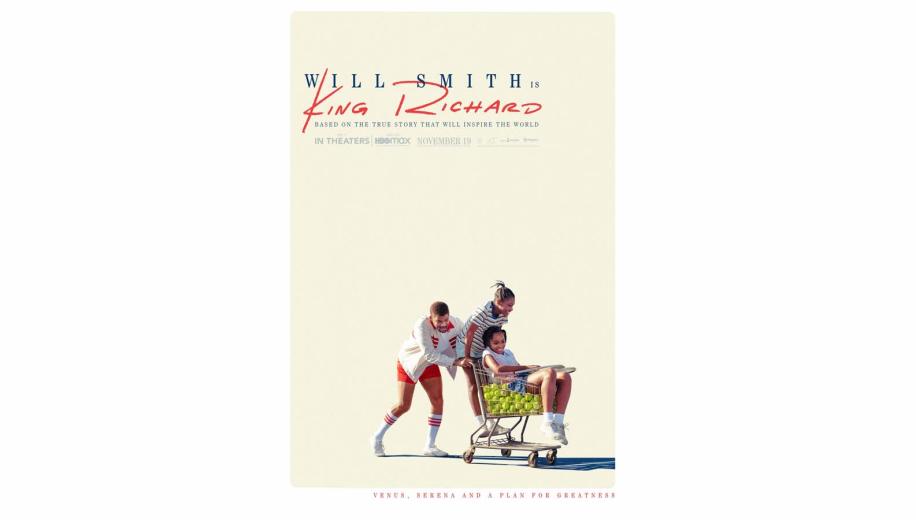 Will Smith shoots for another Oscar nomination with this earnest acting vehicle; a charming Straight Outta Compton underdog story about the trials and tribulations of the legendary Williams sisters and their relentlessly determined dad.

Many parents hope that their children will find something they are gifted at, or at least something that makes them truly happy, but it must be soul-destroying to see in your children an amazing talent and yet not be in a position to do anything about it due to financial or social circumstances. It's easy to look at Serena and Venus Williams as "merely" two of the greatest tennis players of all time, arguably the greatest female tennis players of all time, but their path to greatness was not a traditional one, born partly from circumstance, but also from the driving force of their father.

... there's something powerfully intoxicating about this portrait of "King Richard"

Venus and Serena Williams are amazing young tennis players, trained by their tennis coach father Richard, who wants great things for them. But for the time being they have to make do playing dirty courts in the gang-riddled streets of Compton, with violence around every corner, and seemingly no hope of escaping to fulfil their dreams. Never giving up, Richard is determined to find a way to get his children out, and give them their shot. And he has a plan. A singular vision which, for good or bad, he will not let anybody or anything get in the way of.

King Richard is a fantastic vehicle to showcase Will Smith's talents. And the man has talents. But perhaps sometimes the desire to show them can get in the way - Collateral Beauty was a trainwreck of a movie, Seven Pounds almost drowned under the weight of its own earnestness, and Pursuit of Happyness was noteworthy mostly for his performance, with the actual story arguably too "Ron Howard" for its own good. No, Smith may be a talented man, but he's probably never been better than in his early-career portrayal of Ali, a Michael Mann film everybody has forgotten about made at a time when nobody was really ready for it.

Returning to uplifting sports drama once again, this Smith-produced vehicle is helmed by an up-and-coming director, who is likely to garner some measure of attention here even if he's also going to be vastly overshadowed by the star of the show, and the specifically-angled narrative which almost entirely jettisons the tale of Serena (she gets a coda), and mostly sidetracks Venus herself until the final act, instead focusing intently on their father/trainer/manager Richard and engineering a platform upon which Smith can once again stand out. It's a clever move, and an effective one, and the veteran star doesn't squander it either, clearly studying up on mannerisms and behaviour (it helps that Williams was not only likely a happy interviewee, but also video documented their entire lives) and committing to a dedicated in-character role which seldom relies on overt showmanship and instead requires some measure of restraint from the man. It works a treat, and there's something powerfully intoxicating about this portrait of "King Richard", a man seemingly almost preternaturally gifted when it comes to his vision for the future of his daughters.

It's a good, effective sports drama, and a great performance, and only the cynical are left looking for more than that

The supporting cast do well to play against form too - and offer a commensurate amount of restraint - with Jon Bernthal, in particular, a far cry from his traditional tough-guy persona and all the better for it, playing Venus's professional tennis coach Rick, who finds that he's not only going to have to deal with the budding prodigy, but also her dominant father too. And young Saniyya Sidney is outstanding as Venus, making you wish the movie was a little bit more about her. It's a well cast, well acted piece, which does its best to offer a few surprises along the way, to keep you invested in a tale which many already know the outcome of.

King Richard does, however, play it rather safe. There are hints of darkness in the early stages - with the gang threat in Compton well portrayed - but beyond that the feature mostly feels like precisely what Richard used to advertise it as on homemade billboards at the tennis matches themselves: The Williams Show. Only it's his show they're talking about now, with precious little real insight into the man - no warts and all depiction here, no questioning his methods, his obsessiveness, or his control over these girls. Instead, for good and bad, we get a much more conventional underdog sports drama, utterly inspirational as it may be, showing how two young girls came from nothing, and overcame everything, to become two of the greatest athletes of all time, and how their father led them down the path and protected them every step of the way. The same path that will now likely, and rightly, earn Smith another Oscar nomination which, perhaps, was the point all along. It's a good, effective sports drama, and a great performance, even if the more cynical amongst us might argue that it could have been more than just that.

King Richard is in UK cinemas from 19th November 2021.