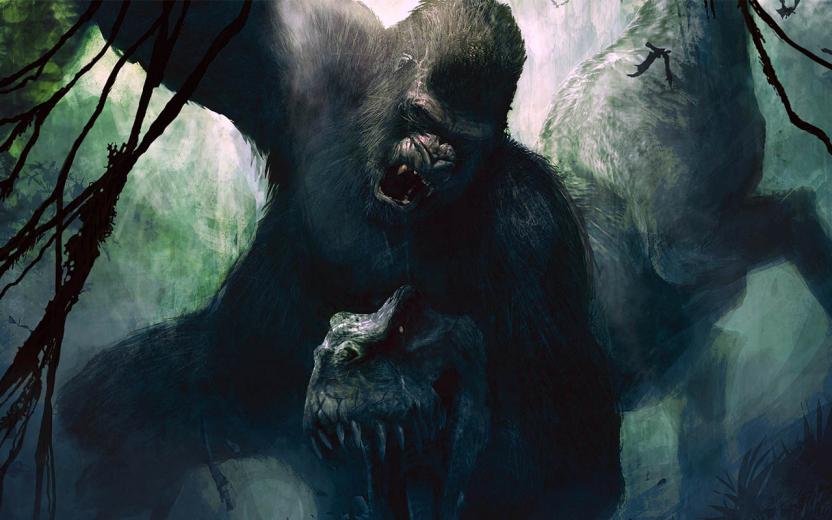 Cynical marketing ploy, or user-friendly, access-all-areas, fanboy treasure-trove? Only you can decide.

For me, this year has been dominated by two movies - the phenomenal return of the Dark Knight in Christopher Nolen's Batman Begins and Peter Jackson's coming-so-soon-it-hurts epic remake of King Kong. Throughout the year, so-called event movies came and went without the quality to back up their hype (step forward Revenge Of The Sith and War Of The Worlds, to name and shame just two) and, after the midway-point glory of Batman, it became increasingly clear that there was only one hope left for the shining cinematic baton to be passed on to. The ape-shape on the horizon has crawled slowly, but inexorably closer as the months have gone by, the media greedily - though I must admit, with welcome arms - championing the classic tale's re-imagining and helping to stoke the groundswell of anticipation around the world. Peter Jackson had given us a bumper Christmas present each year until the Rings Trilogy was completed and, with a canny knack for self-perpetuating movie-monoliths, he's doing it again with the December theatrical release of King Kong. Now, it must be made blatant from the outset that I am completely and utterly biased towards this new version. From the moment I first realised that Jackson's interpretation was really going ahead I had been on pins, gagging to see the daddy of all movie-monsters rampage across the screen once more, and in the capable hands of a filmmaker whose skills I greatly admire.

I've been a devotee of all things related to the Big Ape, from his original appearance, first-remake and numerous off-shoots in film, book and comic, and the wait for this spectacle has been nigh on unbearable. As a sucker for the hype-machine when it comes rolling into town, I've obtained every item of merchandise that I can lay my hands on, and turned my house into a veritable Skull Island. (The Gladiator stuff will be back on show, soon enough!) I love the build-up and the excitement to the arrival of a big blockbuster. Even though a father now, myself, the giddy big-kid euphoria of it all has never left me ... and I have to say that I can't recall a film ever having had this much of an effect on me before I've actually even seen it. So, it was with great pleasure indeed, that I sat down to review the UK R2 release of Peter Jackson's King Kong Production Diaries - pipping the US release by a week, though sadly losing some of its best elements. More on those later.

Now, it may be a somewhat unorthodox move to bring out what amounts to a huge set of “special features” for a movie before it has even been released theatrically, and many will no doubt leave it well alone for reasons such as a fear of learning too much before the big treat comes swinging in, the thought that its contents may only end up getting regurgitated on the full DVD release (tentatively scheduled for April 2006), or simply revulsion at the sheer impudence of milking the gullible fan's hard-earned cash. Well, let me set your minds at rest over a few of these niggles right now - these Diaries may reveal a lot, but hardly much of the direct plot, and nor do we get a great deal in the way of footage from the finished film; the word from Universal and Peter Jackson is that the full DVD release will not contain any of this stuff; and the relatively cheap price for an extensive 2-discer, that will certainly please the real fans no end, makes the money-making racket angle a moot point.

Culled from the nifty Kongisking website, a haven for fans presided over by Jackson and company on a similar theme to TheOnering site for The Lord Of The Rings production, this sees all 54 individual production diaries that were posted there neatly arranged across the two discs and accessed in a variety of ways. You can skip directly to an episode by date, or by location, or simply with a Play All option. Peter Jackson provides us with an Introduction (5.34 mins) on Disc 1 that sets up what you are about to see and how it all came into being, cueing the fact that the Diaries really happened by chance and only sort of gathered momentum as they went along.

Taking the form of short behind-the-scenes featurettes, the entries in the diary cover literally every facet of the huge undertaking, from conceptual artwork to set construction, from a day in the life of a New City extra to the thankless joys of lighting continuity, from authentic costume and makeup design to finite detail in the set-dressing of the Manhattan store windows. We even get to see the life of a reel of film from the moment it is snapped into the camera, to its eventual processing and editing. Disc 1 chronicles the tour of duty on Skull Island, its sets and environs, whilst over on Disc 2 we get comprehensive coverage of the work done over on the New York City sets, and one very exciting little extra, which I'll come to later on. Now, the key point here, folks, is that these episodes were taken during production - ie, when the actual principal photography was being done - so we see sets being built, cameras getting set up, actors rehearsing and occasionally going through the proper motions for the movie cameras, but mainly we get lots of footage of the unsung heroes behind the scenes having their say and taking us through their respective roles. The clever thing is that it is rarely boring, even though the subject matter tends to veer from Kong, the film and the creature, for much of the time. Anyone who has watched and loved the ad-infinitum extras on the Extended Editions of the Rings Trilogy will get a kick of this stuff, as Jackson and crew, once again, seem to be offering a genuine insight into the whole movie-making process, literally taking us by the hand and guiding us through the virtual labyrinth of logistics that goes into creating such an enormous project. So, if you have any kind of interest in films (and if you haven't - what are you doing reading this?) you should find this kitchen-sink/fly-on-the-wall examination fascinating. Just look at the wealth of detail that went into the fashioning of the New York streets - the cars, trams, signs and assorted bric-a-brac that went into making the set a living, breathing snapshot of the metropolis from the 1930's. And then there's the miniature work, and the green screen/blue screen gubbins that acts as a technological poles-apart reference for when Jackson shows us his collection of dinosaur props from the original Willis O'Brien movie. There's even an episode devoted to the creation of the infamous steam that rises from the New York gutters, and it seems that everyone and his dog has a different opinion as to what formed it in reality.

Along the way, however, there appears to be plenty of time for goofing about. Check out the entire episode in which Gandalf trespasses on to the set and begins taking unsanctioned photographs. The cast and crew send up the entire enterprise by chasing the wily wizard all over the place, occasionally getting pinned down by his magical staff, Omaha-beach style. And, although the cast are actually only on-hand for a relatively small portion of the time, there is some fun to be at their expense, too. Jack Black, who is playing the intrepid 30's filmmaker Carl Denham, in particular, finds opportunities for zaniness and enters into the light-hearted spirit of things with gusto. The dispute he has over his lack of height is priceless - as is his solution to remedy the situation. Peter Jackson, himself, had me laughing during a moment when a fan's name - Ignaz - causes him to briefly stumble. Adrien Brody and the delectable Naomi Watts only appear briefly, but check out the alarming American accent on Jamie Bell even during a few moments of downtime. Andy Serkis gets to prance about in his motion-capture suit - as does Jackson, himself - but, in reality, we get very little of the barnstorming effects/movie-magic side of things because it looks as though - and this can hardly come as a surprise, really - we are going to be treated to a set of Post Production Diaries soon, which will, no doubt, predominantly feature the many beasts and effects swirling around the big main man and just how they were brought into being.

So, for almost four hours we get a fairly in-depth look at the eight-month shoot in a kind of guerrilla-style, warts and all, documentary. Ha - did you see what I did there? Guerrilla-style? Oh, never mind. The sheer scale of the project may be daunting, but the passion behind it is nothing short of inspiring. King Kong 1933 is the film that set an enthralled young Peter Jackson on the road to making movies. In many respects he is one of the luckiest men on the planet as he now gets to remake his life's dream, his ambitions and talents turning full circle as he will have his own name standing proud above the title of his own Holy Grail. Let's be honest, folks, that is pretty damn cool. And he is certainly treating his favourite cinematic tale with the respect that it deserves and that commitment and devotion is carried over by the colossal cast and crew. Time and time again, despite the hard work and long hours that go into bringing such a story to the screen, the terrific amount of fun that everybody seemed to be having comes to the fore. I'm sure disasters occurred and tempers flared, but the presence of Peter Jackson seems to have been a calming one, his influence totally in control, and his boundless optimism and enthusiasm a benchmark that everyone else sought to emulate. Even the person employed as a Plane Spotter.

Obviously, I'm writing this without actually having seen the finished film yet. In fact, my date with it is only a couple of days off and I'm getting the shakes pretty badly now. But, I can safely say that I thoroughly enjoyed the time spent watching these Diaries. They have whetted my appetite in a way that can only enhance the movie for me. Having gained a little more background, and knowing more of what went into the production will, I'm sure, garner a richer appreciation for what has to be the biggest film of the year.

The Limited Edition R1 release of the Production Diaries, whilst identical in DVD content, comes in splendid packaging made to resemble an old weather-beaten attaché case, and contains a gorgeous 80-page scrapbook of drawings and photos, four exclusive art lithographs and a certificate signed by Peter Jackson. I own both versions and I think it should be fairly obvious which one you should opt for.

Highly recommended indeed, although, if you have only a passing interest in Peter Jackson's film, then I doubt this release is for you. Made by Kong devotees, for Kong devotees.