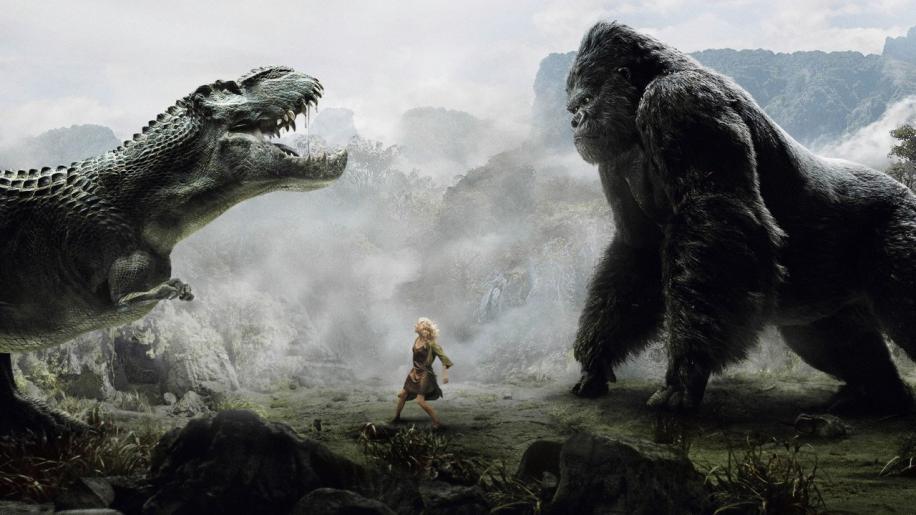 Some films are so well know, so ground breaking, so influential that they had inspired countless others to follow likewise. Kurosawa's Seven Samurai is often sighted by many, many film makers as the reason they chose their career; Kubrick's 2001: A Space Odyssey is another and so to is the RKO picture King Kong that first hit the screens in 1933. At the time is was the most technologically advanced film to date, pushing the very limits of the medium; another hugely influential film, for without it there would be no Ray Harryhausen and his generation of film. Neither would there be Peter Jackson, a New Zealand born horror director that has managed to buck the trend of letting Hollywood dilute his drive as it does with most 'foreign' directors once they come to the machine. His first Hollywood feature, The Frighteners (1996) was not terribly well received, although it was technically brilliant. On the back of that Universal approached him to remake King Kong, he jumped at the chance for King is his most favourite film of all time. I was surprised to lean how far production actually went for this film, it was scripted, designed and models were built until Universal suddenly pulled the plug, sighting the release of Mighty Joe Young (1998) and Godzilla (1998) as their reasons, i.e. they didn't want to be the third release of a gorilla/monster terrorising New York. Jackson, understandably, was crushed but he came back with a little film entitled Lord of the Rings which would take up the next seven years of his life. Towards the competition of Return of the King and the resounding success of the films to date, Universal once again approached Jackson for the Kong remake; elation overriding his exhaustion, Jackson once again was on board and production started while RotK was being completing. It enabled him to utilise the same production team he had forged with LotR, their close working relationships driving the film ahead compensating for the relatively short pre-production period of two years.

Jackson was, at last, able to make the film of his dreams, the film that he loves; and when you see the finished product that is more than evident; each frame is meaningful and full of devotion; this is a personal work inspired by a man deeply in love with his subject. Just as the beast was slain by beauty, so to was Jackson slain by a spectacle. His interpretation follows the same path of the original; Carl Denham, film maker, takes struggling young actress Ann Darrow to an undiscovered island where the tribal inhabitants sacrifice the girl to their God, a 25 foot tall gorilla, who falls in 'love' with her, protecting her against all else only to be trapped and shipped back to New York as a circus freak, upon which he escapes and is ultimately killed atop the Empire State building. However his vision sees a far more in depth feeling, not only towards Kong's devotion to Ann and her reciprocation, but also between Ann and Driscoll or even Denham and his devotion to his art. The film is about love and companionship, in much the same way Jackson loves this film, he wants us, the audience, to love it with the same passion that he has. On some level it works, but it also turned many people against it some feeling it too pretentious others aghast at the films run time. I however am not one of them, I see the film as a beautifully crafted homage to one of the greatest films of all time and this interpretation is as good as it gets in terms of story telling, spectacle and emotion. Kong's fate is a tragic one, and Jackson rightly wrings all the emotion out of his death scene as he can, even now after many viewings I still get that lump in my throat.

One thing that Jackson has become famous for is his 'extended' editions; a term he prefers over 'director's edition' since that implies the theatrical release was not director approved, which is nonsense. Each of the LotR films was treated and now Kong his forth in as many films gains an 'extended' edition. Some argue that this is the Lucas syndrome, get as much out of a film as is possible; multiple releases, merchandising etc. (A case and point could be the recent re-release of a two disc version of each of the LotR trilogy.) Yet the extended versions of those films add much to the films, adding back many scenes fans of the books have come to love.

So what of Kong then; what could possibly be added back to enhance the viewing pleasure of the film. Some wanted to know what happened to the tribal inhabitants after their sudden disappearance, others the ship journey with Kong aboard; both laudable subjects that would add to the film. Sadly they are not to be seen in this edition. In fact what has been added is fifteen minutes of footage to the island pursuit of Darrow by the ship crew. The first scene occurs almost immediately after the crew enter Kong's domain, they are set upon by a 'ceratop creature that charges them like a rhino. The second is a river boat sequence with the crew are menaced by a 'piranadon' creature in a very 'Jaws' homage. The third, most effective, but shortest scene has Lumpy shoot a man sized flightless bird intercut with Ann's escape from Kong, leading us to believe she was in peril of being shot. And, as the saying goes, that's your lot. I have a number of issues with these scenes; principally they are totally unnecessary. In the case of the first scene, I feel it spoils the reveal of the brontosaur/diplodocus long neck creatures latter in the stampede. The river sequence is an entity in itself and whilst is pretty good and exciting adds nothing to the film except to slow down the pursuit. Finally the bird shooting scene is actually quite effective, but only works on the back of the narrow escape of the river sequence. In all, then, I feel these addition scenes are completely unnecessary and spoil what I consider to be a perfectly crafted theatrical version, making this 'extended edition' rather superfluous. However, I am prepared to admit, I may be in the minority here. There are plenty of fans of the film that will be positively gleeful at the prospect of more Kong; if only there was more Kong, then I'd be persuaded too. However, these extended additions are more than just the film, the DVD package is an all encompassing set and one that deserves a detailed look.