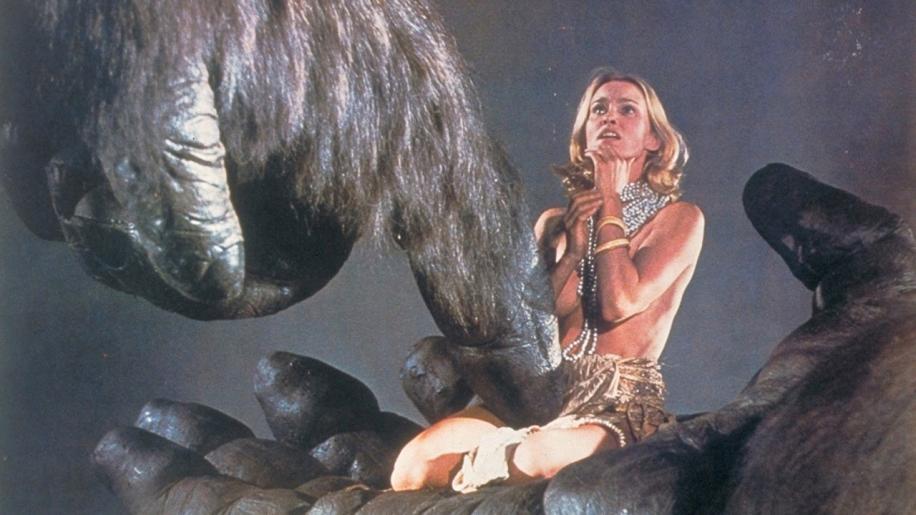 I don't think I've ever seen this film look better than here on this edition. The image may be marred by some small elements of original print damage, but it has certainly been cleaned and polished to a healthy new sheen. A few nicks and scratches here and there perhaps, with the worst damage being a couple of vertical lines in the shot where Kong lets Dwan slide into the rock pool. Grain is apparent, too, but it manages to lend the image a nice filmic quality that is never distracting, nor obtrusive. Colours are very good, with the lush island setting looking simply gorgeous. The crisp Love Boat-style uniforms on the Petrox officers are bright and clear, whilst the native costumes are rich and earthy. Skin tones are pretty decent with Lange looking simply radiant. The image on Skull Island is very vibrant, overall, with the sacrificial ceremony of Dwan particularly standing out for scrutiny. The ranks of torch-wielding tribesmen are well-detailed and the flames nicely rendered. Even the big pan back up through the vast ravine leaving the Petrox explorers as mere dots in the far distance deep down below reveals lots of nice finite detail.

Occasionally some background shots seem a little hazy and indistinct - like Wilson's crowded camp on the beach, or some shots of the National Guard prancing about or cowering in New York, but the disc copes well with fast action and effects shots. There is some edge-enhancement but no dot crawl, smearing or motion drag that I noticed. Compression artefacts didn't manifest themselves either. The blacks are very deep, with some sequences actually suffering as a result - the shadows possibly overcompensating a little too much. Some scenes I don't recall being this dark before. But again, these moments are only slight and do not really detract from what is, in my opinion, a fine transfer indeed. This has definitely been restored.

To my knowledge, this is the first time that Kong '76 has been released with a DD 5.1 makeover, and here it accompanies a Dolby Surround track. To be honest, though, there really isn't that much between the two. Both offer a solid, meaty turn from the front soundstage that gives a good, clear reproduction of Barry's score, some dynamism to the effects and never once swamps the dialogue. The DD5.1 is slightly louder and widens up the environment a little but the difference really isn't that great. With some tweaking about you can enhance the rears, although they really only serve to boost the music and the jungle ambience - a few wild birdcalls and the crashing of trees whenever Kong is about.

Again, the ceremony at the altar gives off the best audio performance, providing a terrific presence. The score is forceful and loud and the sub plays a small part in emphasising the pounding drums and the approach of Kong. Most of the action is still hefted about the front soundscape, though, but there is an agreeable degree of directionality. Kong's roar has a great powerful delivery that makes some effort to climb around the set-up, but the helicopters swooping around at the end are quite disappointing, acoustically.

One thing of note is the blasting of Kong's horn from the ramparts of the wall that can now be clearly heard by Jack's party of rescuers as they arrive at the beach. I don't recall hearing this as clearly at this point in any previous version.

Overall, this is good, clean mix, either in DD 5.1 or Dolby Surround. Just don't expect any sensational whip-around effects.

Apart from the rather ponderous trailer, Paramount have seen fit to re-issue the movie without anything of extra value. For a film that really deserves dusting down and re-appraising, this is a crime. The story of its production is legendary and should have been covered. This is a wasted opportunity, folks, no matter what your opinion of the film.

King Kong seventies-style made a huge and indelible impression on me, and whilst it has become almost mandatory to slate and lambast the film for its many failings, I find that my fondness for it remains undiminished. So, in the wake of O'Brian's seminal masterpiece (get that double-disc reissue, folks, it's essential) and in the exciting run-up to Peter Jackson's no-doubt triumphant spin on the tale, take a trip back to the Skull Island that is sandwiched delicately, and somewhat forlornly, between the two. It's not quite the story that anybody expected, and its errors are largely self-evident throughout, but there are many elements that still work splendidly. Heartfelt, poignant and boasting a thick slice of 70's nihilism that commands an odd sort of desperation between the two leads that would be unthinkable in the cinema of today. The screenplay is surprisingly witty and the climax has the added taint of seeing the Twin Towers still standing proud.

Everyone has the James Bond that they grew up, or the Doctor Who. They might not be the best, but they are the ones that we are most comfortable with. This Kong is the one that brought the full tragedy of the tale home to me. When the cycle is completed with Peter Jackson's offering, we will have three unique depictions. And Guillermin's is no lesser an effort for having tried to find a different path.