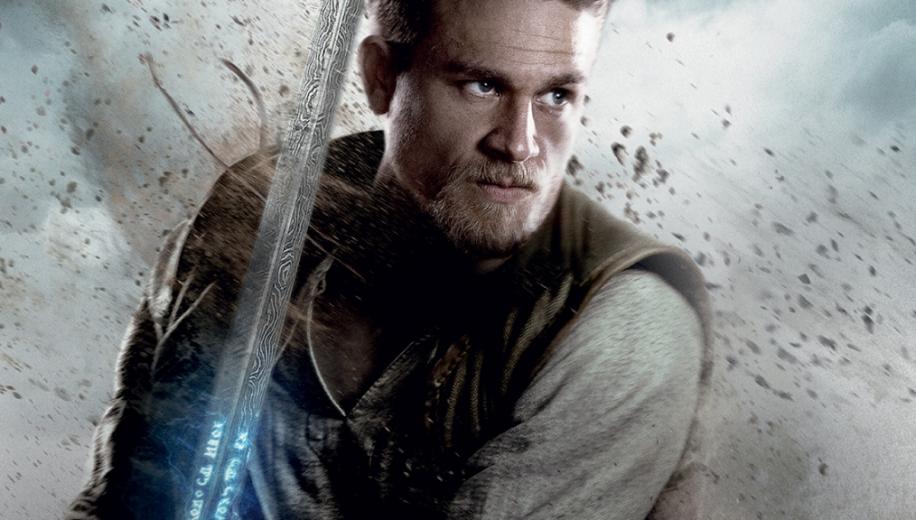 You're no longer a myth. You're starting to mean something.

Touted and sold as Lord of the Rings meets Guy Ritchie's own Snatch, King Arthur: Legend of the Sword reaches neither of those lofty heights, indeed while the description might be apt, the result is a sodden mess that fits into neither category and ultimately fails to impress. Ditching all but the barest essentials of the Arthurian Legend upon which the film is supposed to be based, Richie assaults the senses with expansive set pieces, high octane action, loud, brash music and the sort of frenetic pace, editing and non-linear story telling he has become synonymous with. But underneath it all is a confusing narrative with a lack of characterisation and poor motivation. The result of which fails to invest the audience in the plight of the characters and therefore any peril they encounter becomes moot.
But... the film is difficult to hate even if it is the filmic equivalent of a really hot curry. When going down, it’s actually ok; it’s only the day after that the cracks begin to show. What is hardest to forgive is the lack of attention given to the legend upon which the film is based. Change the names and you have a passable medieval magical sword flick; and on that level it might have succeeded better. As it is, Arthur is a street thug with daddy issues and a mystical sword able to defeat uncountable enemies. Characters are added to the legend to make the script work, so nothing really makes much sense. It’s as if the volume and action has been turned up to cover over the narrative holes. Updating is one thing, losing sight of the idea is another. It does, however, carry a certain charm even if it is ultimately forgettable. King Arthur: Legend of the Sward was shot digitally using Arri Alexa and Arri Alexa XT cameras with 3.4K resolution, and finished as a 2K Digital Intermediate. It is this 2K DI that has been up-scaled to a 3840 x 2160p resolution for this Ultra HD Blu-ray. The film is presented in a widescreen 2.40:1 aspect ratio with the disc using 10-bit video depth, a Wider Colour Gamut (WCG) and High Dynamic Range (HDR), and is encoded using the HEVC (H.265) codec. We reviewed the Region free UK Ultra HD Blu-ray release of King Arthur: Legend of the Sward on a Panasonic 65DX902B Ultra HD 4K TV with a Panasonic DMP-UB400 Ultra HD Blu-ray player.


WCG and HDR really bring the image to the fore

When it comes to detail there is very little to tell between the (included) 1080p Blu-ray and this up-scaled 4K image; staples like skin texture, clothing weaves and landscape shots show marginal improvements in their finite edging, though the majority of the CG does seem slightly keener – for better or worse. Leave it to the WCG and HDR to really bring the image to the fore; adding greater depth to the frame and enhanced by the wider black level, the crowd scenes immediately become more dense, forests have a greater sense of being, mountainous terrain is sharper, deadlier and more foreboding.

Colours, themselves, are fairly muted throughout, concentrating on earthy tones and greys, but greens have a stronger hue (check out the glass lands in the opening battle sequence), flashes of red and blue (generally clothing, check out Uther’s gold chain mail, or his army’s dyed leather armour ) pierce the gloom; while oranges of fires are bright with form (check out the burning embers of Vortigern’s alter-ego), while the blue haze of Excalibur is lighter and brighter. Flesh tones are also well maintained. Blacks are generally robust, they certainly hold more shadow detail, but there was the odd occasion when they greyed somewhat. No such issue at the brighter end of the scale; cascading waterfalls, clouds, clothing - all maintain shape with no hint of clipping.The muck and murk of this image does contain a modicum of noise and blink and you miss it banding, but on the whole it's a clean, bright image. Just not quite the upgrade you might expect over the Full HD Blu-ray. The Dolby Atmos soundtrack is bass and effects heavy with little finesse; right from the off the bass assaults the subwoofer and shakes the walls. The score is used to really bulk out the sound-scape to eye-watering degrees, so much so that when it finally quietens down you feel a sense relief. Effects are myriad and are best expressed during the many action scenes; arrows whizzing past left, right and overhead; sword clashes, punches, kicks, explosions, animals – all benefit from precise positioning in the sound field. In amongst all the mayhem the dialogue remains clear and precise, never becoming lost, even the whispering tones of the Lady in the Lake. Bass, as already alluded to, is immense; loud and heavy and used to fill out nearly every effect, including the score, meaning at times you are pummelled into the sofa, although the lowest of levels are rarely obtained. There is plenty going on, but like the film itself, perhaps a little bit too much and without any restraint. Bass hounds will have a ball, those that prefer a more balanced mix might need to adjust their levels a little. All the extras are to be found on the Full HD Blu-ray included in the set:

Sword from the Stone – Twenty minute feature with director Guy Ritchie explaining his creative decisions and ideas for his take of the Arthurian legend.
Building on the Past – Fifteen minutes looking at production art, designs and costumes.
Camelot in 93 Days – Spend ten minutes discovering the challenges involved with the complex and unusually short shooting schedule.
Arthur with Swagger – Another ten minutes looking at Charlie Hunnam's interpretation of the character.
Inside the Cut: The Action – Selection of sound bites that look at the action set pieces and stunts, over in six minutes.
Legend of Excalibur – Short six minute look at this new interpretation of the sword.
Parry and Bleed – Another six minutes this time on training with swords and effective choreography.
Scenic Scotland - Final six minutes looks around the filming locations in Scotland. King Arthur: Legend of the Sword sees Guy Richie bringing his typical style to the ancient legend arguing it brings it up-to-date for the modern cinema going audience. You could also say it’s loud, brash, anachronistic and pays the barest minimum of lip-service to the myth it is supposed to be telling. Both points are true. Richie’s gloss tries to paper over the cracks of a broken narrative but, if you can forgive it there is some enjoyment to be had. Look any closer and poor characterisation, motivation and scant regard for the actual myth will yield less than stellar rewards, and no amount of the film's charm can cover that.


A loud, brash and anachronistic film that pays the barest minimum of lip-service to the myth

As a 4K Ultra HD Blu-ray Disc package, the set from Warner is reasonable. The up-scaled picture is well detailed makes good use of the WCG and HDR to offer greater depth, wider colouring and excellent whites; it is not, however, a massive step-up in terms of quality compared to the 1080p Blu-ray image. The Dolby Atmos track is a bass hounds dream, being loud and brash; effects are well positioned in the sound field, but it is really heavy with little finesse so quieter moments come as a relief. The extras package is a bit flimsy however.