Fall in love with your new furry friends 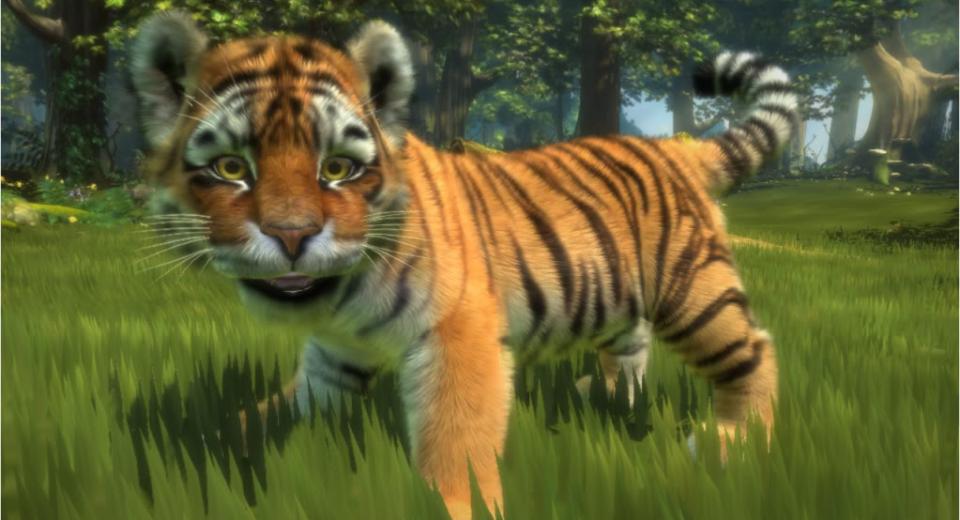 This is it; the race is now on for Christmas dominance between Sony, Microsoft and Nintendo, the three big publishers who will try to outdo one another at every turn. Microsoft have dealt a clinical blow though, releasing their new tech mere weeks before the month of Christmas arrives. Kinect is now here, and it’s clear that it is here to stay and not go quietly given its huge promotional campaign that has graced our television sets recently. It hashad an effect on the public too, there are shortages in some areas of the solus pack for Kinect, much like the Wii when that first launched.

Frontier Developments appear to have relatively little experience on consoles though as their back catalogue seems to suggest them favouring the PC gamer, with titles such as Rollercoaster Tycoon and Thrillville. But there would be no better place to start a new console development career than partnered with Kinect’s technology if they can create a game that works well and keeps gamers hooked. There is an element of doubt in some gamers’ minds though, as Kinect could end up being nothing more than a gimmick making us fork out cash for it now, then have a number of poor titles released for it in the future. So Microsoft has to play its cards right in order to make the most out of its new launch if it wants to prolong the console’s life beyond what was first expected.

With any new console or technological add-on release, there is inevitably a wealth of new compatible games that come flooding its way in order to drive sales through the roof. The product in question for review this time is Kinectimals, a title which grants you the care over one or more pet cats. Not just any cats though, the big and rare cats that are feared to be extinct in the near future, boosting the appeal of looking after a cute fluffy cub of these species’. This game obviously, along with many of the release titles, appeals to the younger market and Microsoft are clever monkeys who know how to spot very good child/family centred titles (just look at Viva Pinata). So will Kinectimals deliver an intuitive experience, or will their fledgling release on a next generation console fail to ignite people’s passion for Kinect?

Despite having a younger audience in mind, Frontier games have not been shy about making the game look as beautiful as they can, without heightening the tone of the game to be too serious. There’s a fine balance between the cartoon-style graphics, contrasted with the detail that has been given to each object you encounter. Each pet you care for, be it a Bengal Tiger or the Black Panther, has great texture on it and you can define each of its strands of fur and they are perfectly animated. Their fur will sway as they move, their paws push down on blades of grass and dust will fly off their backs as they shake themselves clean. This not only makes the game look very good, it also boosts the connection with your pet as you get to learn its traits, begin to care for its wellbeing and bond with it as it looks at you through it’s glistening eyes. Each environment you will visit is equally detailed and full of life, there’s a backing music score that suits the game and you can hear and see other animals in the background of the area you’re in.

The game doesn’t just chuck you into the deep end, leaving you flapping about wildly trying to control your feline friend; you’re guided throughout by a flying ‘creature’ called Bumble. His voice is a bit high and can get annoying after a while, but he is intended to be conversing with a child so this is no big downfall and can be easily ignored. Bumble takes you through all the menu navigation, which is very easy and not cluttered, and flies you to the upcoming areas and helps you get to grips with the activities and features you discover.

As mentioned, the menus are easy to negotiate, multiple choice menus are overcome by swiping your hand horizontally in the desired direction you wish to move the menu in, think Minority Report style. All buttons are shaded so they’re not too hard to read and they’re all of a relative scale to make them an ideal size to ‘press’ by holding your hand over them. Too many games often fall foul of having cluttered menus that make them boring and a chore to navigate, but here there’s not a mind-numbing array of information, it’s straightforward functionality and no unnecessary options to confuse the player.

Something that is immediately clear is that Kinect is a very clever bit of kit and it works very well despite the lack of a handheld peripheral to track your movements. The slightest of motions will be tracked on screen, be it an arm or leg movement, or a shift in your body’s lateral position. This makes the game a joy to play as you won’t have any issues with the tracking of your movements, but sometimes it’s your pet that gets in the way when you try and throw a ball for him/her to fetch. Instead, they will stand right in front of you and let the ball hit them and ignore the fact that they’re supposed to be fetching the ball.

The little story that is involved in Kinectimals plays out like this; you have come to a deserted island full of Kinectimals that was inhabited by an explorer-come-pirate who left the island a long time ago. He left Bumble in charge of the animals and was told to wait until he returned, but he didn’t, so discovering the island’s lost secrets is now down to you and your new adopted fur-ball. You will be sent off to compete in challenges and mini-games on your travels which sees you kicking footballs at bubbles in an attempt to burst them or drive an RC car round a circuit (controlled my holding your arms out and steering an imaginary wheel) in the quickest time possible, all the while accompanied by your cub. Each challenge has a bronze, silver and gold medal reward along with coin bonuses that can be achieved by reaching the relevant score for each, so naturally your competitive edge will rear its head at times.

Between these challenges, you’ll return to a ‘home’ area where you can shop to buy new items for your house, pet and teach your cat new tricks. All of which is very interactive, especially the trick-teaching as saying, “Lie down” or “Play dead” will get the desired outcome on screen in a matter of seconds. Doing this earns you discover points which build up to unlock the next area or challenge, so there’s definitely a reward for building the bond between you and your friend. Discovering hidden objects is also a key feature that your cat will hint for you to do at certain times in the ‘home’ section, you control a magnifying glass-style object with which you are to try and find patches of ‘aura’ that tell you where a hidden object is buried. After your Kinectimal has found the spot to dig, you then have to help it do so by making a digging motion with your hands until the chest is pulled out of the ground.

There’s no denying the fact that there’s plenty to do in the time that you’ll spend with your pet/s and there’s six of them to choose from so you can end up having your hands full when you have to care for each of them individually. On the same note, Kinectimals is not a game you can race through in five hours or so as it will take one or two hours to progress to the second area and given how interactive the game is, you’ll probably want a break after an hour or so of playing.

With multiple Kinectimals to choose from, and so many accessories to buy for them and your own Kinectimal house, then there’s potentially scope for hours on end of gameplay, especially when you consider how many times it may take you to win that gold medal on each challenge. There is a “but” though, as this is unquestionably a child/family game which will mean the game will appeal more to those who have a young family and playing on your own can feel a bit empty and unsuitable due to the title’s child-friendly atmosphere.

So it’s official, Kinect is here to stay and Microsoft are determined to do so by releasing as many titles at its launch as possible. But many of the games’ downfall is that, like Kinectimals, their main audience is families and children, so the appeal to those who live on their own or with a partner and have no children may be minimal as titles like these can feel a bit empty. But for those who enjoy playing on their own and don’t mind letting their inner child out once in a while, then this game will be suitable for them as well as others alike.

Kinectimals looks like a childs game and, indeed it is, but even adult players out there will find it hard to resist the temptation of interacting with the cute animals om screen. Without question there are a few teething problems with the title and the game feels a bit empty if you play it on your own as you could easily get more entertainment out of it by playing with somebody else. But as a kids game, this is definitely a fine example of what they should be.