These are not the mini-games you are looking for...... 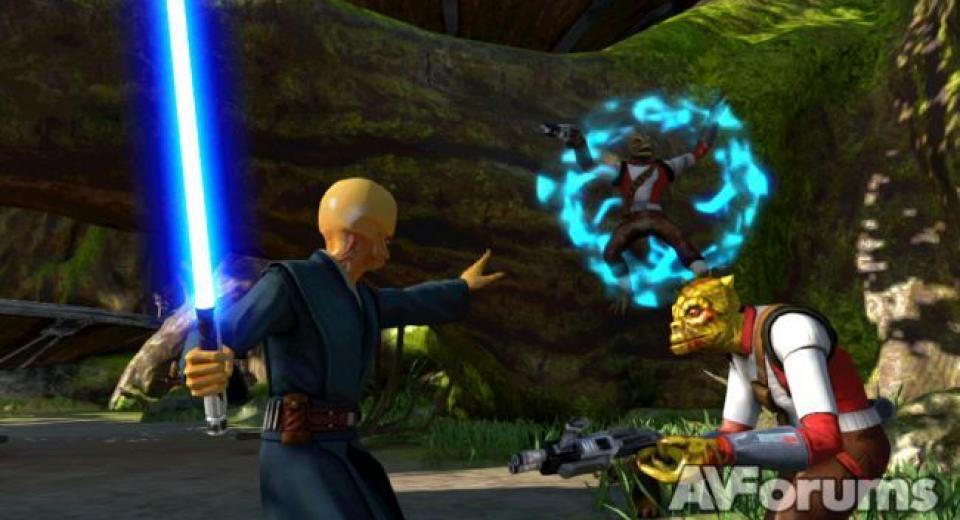 Kinect, it would be fair to say, has hardly set the gaming world alight. Beyond speeches at gaming conferences, high talk of the future of the medium being tied to motion tracking input devices liberating the gamer, and tech demos themselves, there has been little to get genuinely enthused about. If you don't want to dance or have a virtual pet, outside of the casual sphere Tetsuya Mizuguchi's spiritual successor to Rez, Child of Eden, has probably been your go-to Kinect title.

So, how do you give a flashy bit of kit that's fast becoming an infinitely ignorable expensive sideshow a shot in the arm? Just add Star Wars. Most, when seeing the Wiimote for the first time, and hearing of its capabilities exclaimed how great it'd be for lightsaber battles. Well, we never quite got that, though a few games came close with their implementation of melee combat, but Microsoft, ever the big gun able to spend on a franchise to draw the player in, is looking to deliver on that promise. Although it's set during the the age of the prequels, which might draw a groan from some fans, I dare say once the oh-so iconic title text starts rolling, and John Williams' score booms out its opening notes, the initial disappointment will turn into a tidal wave of expectation and fandom. The early signs, the inclusion of C-3PO and R2-D2 as your menu guides in the Jedi archives, give the impression that this may be a game fans of the saga can enjoy, rather than just a cynical cash-in to push a failing peripheral.

There are numerous modes to choose from: Jedi Destiny Dark Side Rising, Podracing, Galactic Dance Off, Rancor Rampage and Duels of Fate. There's also Scan M-Tag - a curiosity for scanning in barcodes from associated products to unlock extras, such as new podracers.

Your first port of call will likely be the main narrative, entitled Jedi Destiny. The storyline is pretty much the same as every single Star Wars game channelling The Force: You're a padawan, taking your training, and thrown unexpectedly into the action. This time it's the Wookie planet of Kashyyk under attack, at first by clone droids and Transdocians, but a more malevolent, and predictable threat lurks behind these easily defeatable minions.

Your right hand is obviously your lightsaber, whilst your left is for Force push, use both arms to Force lift heavy objects and throw your boot towards the screen to catch an enemy in the breadbasket. You'll cut your way through a myriad of opponents and do the odd spot of Force leaping, with the hack-and-slash punctuated by a few speederbike and space gunnery levels for the sake of variety. The combat, the one area the game should have nailed down, is weak. The act of wielding a lightsaber, with nothing in your hand, feels wrong, pop a remote (or may I suggest a Wiimote – you'll be thankful of the wrist strap) in your digits and you'll get a better sense of weight to your movements. The motion tracking is a fraction out of synch, and once again for a Kinect title you're far better off taking a couple of outrageous arm swings in the heat of battle to make sure of detection, than to attempt one precision swipe. It's an on-rails actioner, you can sidestep, rush forward and leap over enemies, but the decision to make some combatants, even early on, able to nullify your force push (though a kick is somehow deemed comparatively effective) means your trusty lightsaber is your best bet.

There are duels, in which you'll have to block incoming attacks (telegraphed, as in real time you'd stand no chance thanks to the input lag) by placing your arm to the left, right, above your head and below your waist to stop blows crashing in from those directions. It's a decidedly uncinematic atmosphere, more like an early tech demo than a finished game. The clunkiness of your on screen character is like a marionette with rusty joints lurching to life, if anything the representation of yourself does you no favours, as you hastily fling out a limb in the hope Kinect will replicate your movements in time.

It's far more fun making mincemeat out of the stream of small fry heading your way. The hectic action masks any motion tracking issues as you can happily flail about and still hit something whilst being surrounded at close quarters. It's like a rollercoaster, only this time you're positively encouraged to put your arms outside the carriage and wave them manically. Tactical fighting is not the order of the day, it's a very straightforward “don't attack head on” with the tougher enemies; some combination of a somersault and a sidestep will usually buy you ample time to score their torsos with your neon blade. Disengage brain, thrash about, get sweaty and forget any attempt at a genuine Star Wars experience. Podracing offers Destiny (story/career based) or Quick Play (one or two players) options. It's all a bit haphazardly Mario Kart, focussing on vehicular high-jinx, but without the memorable courses or thrill of timing a move down to the perfect split second. It may be because the environments are flying past at a fair rate of knots, but the visuals look good, all the courses rehash the same textures, but there's not a hint of slowdown and it all feels surprisingly cinematic – even if you hated the Podrace inclusion in the prequel films, you'd have to admit this is a fair representation.

You'll lean one way or the other to steer, and that side of things is reasonably tight, but the waving of arms to do anything other than guide your craft in a general direction is once again back to party game grand gestures, and there's no worse way to lose a race than to become distracted unnecessarily and subsequently feel the motion tracking has robbed you of first place. It's frantic fun when it allows you to concentrate on steering through the courses at speed (at times almost a prescient look at what a Kinect Wipeout would feel like), but don't expect much more. As a living room fun game, this is where motion tracking technology comes into its own, forgiving basic controls and gameplay that's fast enough as to stop you assessing just how simplistic it is.

The Galactic Dance Off (which uses the geek lust image of Leia in her bikini as an icon) is pure party game chic dressed up in Lucas franchise clothing. And you know what? It works. The songs used are kitsch, tongue-in-cheek tie-ins, sure to raise the ire of fans, like Jason Derulo's “Ridin' Solo”, via a few lyrical tweaks, becomes “I'm Han Solo”. Jamiroquai's “Canned Heat” transforming into “Kashyyyk”, with the lines “Kashyyk in my heels tonight” and “you know this Wookie is for real” being the cream of the crop or worst offender, depending on how po-faced you want to be, but I always suspected Lando could bust a move or two. Sneer all you want, this is Kinect Star Wars in a nutshell, established casual games wrapped in a beloved sci-fi franchise's skin. The motion tracking works well with these kinds of general movements, taking into account rhythm and timing, just the right side of excessively forgiving, even I managed a few on the hardest difficulty, and my dancing resembles a man in a straitjacket with his shoelaces tied together. Just make sure you've got enough space, the rest of Kinect Star Wars can be played pretty much stationary, but this game requires the furniture and shelves be cleared of any breakables.

Rancor Rampage doesn't pit you against the behemoths but instead in the shoes of the slavering beast seen iconically in Return of the Jedi. You smash your way through the buildings, population and vehicles of four locations: Mos Eisley, Felucia, Theed and Mos Espa, choosing between Challenge and Fury modes. The former is based upon point scoring, reaching certain targets which will unlock new features, whilst the latter is pure sandbox, destroy as many structures as possible before you are taken down. Unlike the restricted movement of Jedi Destiny, playing as a Rancor allows you to wander about freely, the cumbersome turning circle and overall player motions needed to facilitate an about face, resembling that of a baby waddling with a full nappy between its legs, fits the gigantic monstrosity nicely.

It's a proper Hulk smash-a-thon, complete with uncharacteristic 50 ft leaps, ground pounds and sonic claps. A repetitive throwaway sideshow but one that'll raise a few smiles as you wreak merry hell on the inhabitants of various home-worlds - if you see the added population and vehicles of Mos Eisley as a symptom of Lucas' digital tamperings, it's easy to build your rage-o-meter and stamp on them without remorse. Duels of Fate, emblazoned with a nice shot of Darth Vader, gives you the opportunity to go one on one (or two-player) against an Empire opponent: Magnaguard, Sun Guard, Count Dooku, Ror or Vader himself. Block, attack and defeat, with a few changes of scenery in between, it's always good to battle familiar faces. You can try to beat your best time (necessary to unlock the later opponents) but beyond that it's a bite-sized chunk of the Destiny mode with better bad guys more easily accessible. It's not really the place to hone your skills, as it's so formulaic and stationary, but if all you want are the one-on-one battles without the distractions of blaster fire and too many bothersome minions to wade through then this will suffice.

Kinect Star Wars is a strangely unsatisfying experience, that ideally should play into every fans' saber-wielding dreams. It's not a jedi-sim but a party game, that some might insist would be at home in the foyer of a bowling alley, surrounded by kids pestering their parents for change. It plays around with the source material, stuck in a quandary about whether to strive for the cinematic or go all out for cheap child-friendly ADD thrills. When it aims square at the latter, podracing, dancing and Rancor mini-game mayhem aren't quite addictive enough, but definitely fall in the immediate throwaway-thrill or guilty pleasure vein, enticing you in with a nod and a wink, as if to say “don't take this too seriously”.

As a package, it's hard to recommend to ardent fans (certainly of the original trilogy), but easy to see as a title that could eat up a hefty amount of time at a family gathering.  However, the argument that it is aimed at a more forgiving, and often younger crowd shouldn't mean its shortcomings are overlooked.  A certain amount of charm comes solely from the characters, seeing Han Solo strut his stuff on a Bespin dance-floor is an oddity most doubtless never expected to see.

Some modes likely would have worked to a lesser degree without the “Ooh I know that from the films” factor keeping your attention, whilst others have arguably been constricted by the presence of a much loved fictional saga to live up to, and lore to adhere to. Ultimately, it is what it is, a segmented, often flawed casual party game with a franchise attached.