Get your tracksuit out, sports day is here! 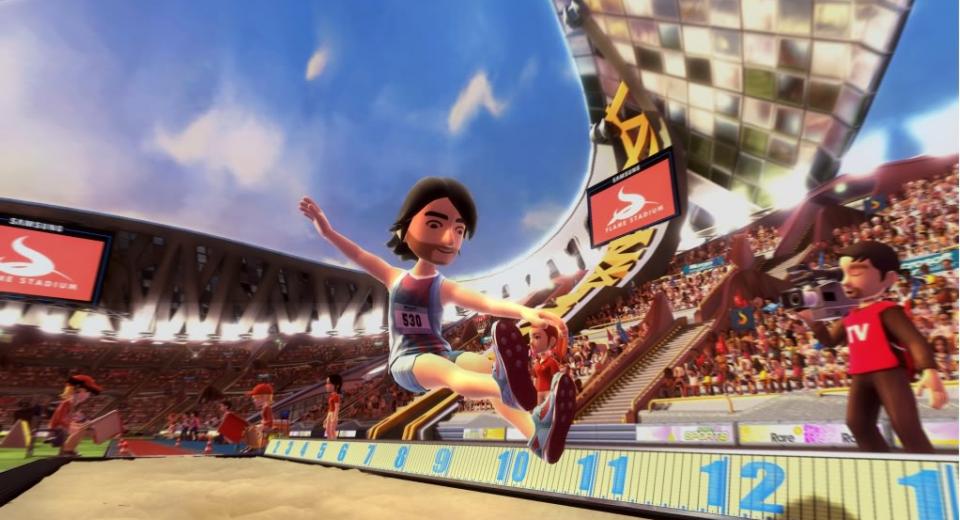 Is there any surprise at all that Microsoft has released a motion control title with the word ‘sport’ plastered on the front cover? Of course it isn’t and Microsoft are taking on Nintendo’s own Wii Sports head on with Kinect Sports, both of which have been imaginatively named. Challenging Wii’s game is no great detriment to the gaming world though as it was a very good title to come bundled with the console, so Microsoft will have to pull a great game out of the bag to succeed in ending Wii Sport’s dominance, hopefully resulting in a cracking release title. On the other hand though, it could be nothing more than a cheap rip-off of Nintendo’s secret formula.

Development duties have been handed over to Rare, who are now subsidiaries of the Microsoft name, and they have had varying degrees of success across many formats. Recently they have created the great ‘pet simulator’ Viva Pinata, the well-received Perfect Dark on Nintendo 64 and the less well-received sequel when the 360 first launched. But one thing is for sure and that’s that the studio has been around for long enough to see how the gaming world works and what their audiences want and expect from the games they purchase today.

Expectations have been high through Kinect’s launch, first catching everyone’s attention when revealed under the code name ‘Natal’ last year. Promises have been made like they were going out of fashion, with assurances of a new way of gaming and numerous launch titles that would revolutionise the way we play games on our own and with friends and family. Big promises yes, but to a certain extent Microsoft has stuck to its guns and delivered on some of them, but they have also left gamers reeling with certain games dropping Kinect functionality e.g. Fable III. With this in mind then, can Kinect Sports score a hat-trick, or will it false-start and fall at the first hurdle?

As has been the case with other Kinect titles, the graphics look simple yet detailed, giving the game a relaxed feel, allowing a variety of gaming enthusiasts to have fun with Sports. This is a very big bonus as the developers for Kinect titles have ensured that their games are full of life, and Kinect Sports does so too. Granted, the avatars look reminiscent of Nintendo’s but they have done since they were first brought to 360, so there can be no real complaints about the game’s similar graphical standard on that front. The rest of the title has been detailed to an extent that gives it an air of realism, without making the game too ‘hardcore’ and overly graphic. Little touches such as the javelin wobbling upon landing, and clouds of sand appearing upon completion of your long jump aren’t genre changing, but satisfying nonetheless. The stadia that you play in are equally full of life, with the crowds reacting to some of your movements, such as raising your hands or pointing at them and fireworks are also let off when records/achievements are reached. Each event has its own stadium/area, so there’s no risk of seeing the same backdrop over and over again, whilst volleyball takes place on a scenic beach where seagulls fly past and waves lap on the shore.

The sound is also appealing; with effects being very clear and you can hear lots of detail that has been put in by Rare, such as crowd chants and air horns amongst many other noises. Some things that do get annoying however are the commentators and the in-game advertising. Most of the time, commentary is fine albeit a bit patronising with the title being aimed at kids, but there are also times when it is out of place and says things at the wrong moment, leaving you somewhat as confused as the commentator seems to be. There are also adverts everywhere for companies such as T-Mobile, Samsung and both publisher and developer Microsoft and Rare (if you were to ever forget which console you were playing on). This is not a massive problem, but it does get tiring when you see company logos slapped around all over stadia and the balls you play with.

One thing that makes celebrating/gloating that little bit easier is the fact that licenced tracks are played out upon such things as scoring a goal in football or getting a strike in bowling. There’s plenty of variety too with Queen, Hard-Fi, Blur and some very inspirational slow-mo running music to accompany replays and highlights and they all suit each sport/event very well for whatever feat it is that you just achieved. Your own avatar can also be used to join in the fun by competing in sporting attire or your own avatar’s clothing, so don’t be surprised if you find yourself running in the 100m sprint whilst wearing your beloved Master Chief Spartan armour or Buzz Lightyear’s Ranger outfit.

Whilst navigation with Kinect is much slower than its physical controller counterpart, it’s still a joy to breeze through menus without the choice of doing so with a pad as the menus are interactive and are no chore to read or control. All the text is easy on the eye and all menu function buttons are perfectly sized to allow all ages to not struggle hovering over a ‘button’ for too long with it being uncomfortable.

Before I start commenting on the gameplay of Kinect Sports, let’s set one thing straight; it’s very early days for Kinect and there are bound to be teething problems with it and it shows, because the tracking is not perfect. It does work around 95% of the time, but every now and again it will confuse some of your movements, which is most evident in the throwing events; Javelin and Discus. The times that it does work though, it works very well and you can forgive the odd occasion when your throw goes awry because of the new technology. But I’m not slating the title because of this, because it has a minimalistic effect on your overall experience with Kinect and the rest of the time you’ll spend playing is very enjoyable indeed.

Sports included are football, volleyball, bowling, table tennis, track & field (javelin, 100m sprint, hurdles etc) and boxing, which is unsurprising given that many of these events are available on the rival format. That’s not to say that they aren’t fun though because they are, all events take place in a relatively short space of time and this allows you to play multiple events in one go. Adding to the fun for the games on the Xbox 360 more so than Wii is the fact that you don’t have to use a controller and yet the tracking is more or less on par with the Wiimote. All games have four difficulty levels for you to play on depending on your current level in the game and how brave or stupid you are to take on the AI. Games such as football could have a bit more depth in the way that you play though, as free kicks and corners are taken for you as opposed to allowing the player to take them themselves. This is something that could be included in the next title though, as there are no competitors who can offer this type of game due to the handheld peripheral being used to track, not a camera like Kinect.

Kinect Sports is always quick to load and doesn’t keep you waiting too long before you’re on your way to becoming the next world record holder or beating yours or other’s personal bests. Fortunately the tutorials that pop up at the start of each event can be turned off manually as not to bore the player and become repetitive, as was the case with Kinect Adventures. Keeping things feeling fresh, Rare offer you Avatar awards upon completion of certain challenges, whilst Kinect records your best moments throughout your event in order for you to save and share, much to your embarrassment more often than not.

Given the fact that there are seven plus games to play in the main event, you will probably spend most of your time playing each sport on increasingly higher difficulty settings in order to build up your player level. There are also mini-games that utilise the main motions from each sport that will enable you to not only become better at each sport, but also give you bragging rights for your personal high score. Each event, regardless of difficulty, will keep you occupied for around five minutes at a time, which is just long enough so you don’t become tired or bored. Avatar awards can also be unlocked throughout the game for those who clad their characters out with in-game clothing, so there’s plenty of reward for those out there who have time to dedicate to achieving said awards.

Something that stands out against Nintendo’s sports outing is the fact that online play is supported here, allowing friends and strangers alike to take each other on head-to-head in all of the sports available. This is something that works well and allows you to challenge your own talents against real players instead of the AI, unlike in the main solo game, keeping things varied and more importantly it keeps you on your toes.

It’s clear that Kinect Sports is fun to play, but its long lasting appeal is something to question as it can become boring quite quickly given the lack of variety in the games and events to compete in. For those who want a game in their collection that can be played within five minutes and give them a break from the more serious titles, then this will suit them down to the ground. Not only that, but Kinect Sports is also a game that can help you shift some of that weight you may have gained over the Christmas period.

With the launch of the new technology, Kinect, come a batch of compatible titles, all of which will split opinions. No matter what people say about the motion control camera there's no denying the fact that Kinect Sports is definitely an enjoyable experience. As expected, the title is much more entertaining when played in a group as opposed to solo but you will get heaps of entertainment out of it. Allowing gamers to compete in a number of sports locally or online, it's clear that Kinect is going to be here to stay and is a lot more than a fancy peripheral through its universal appeal.