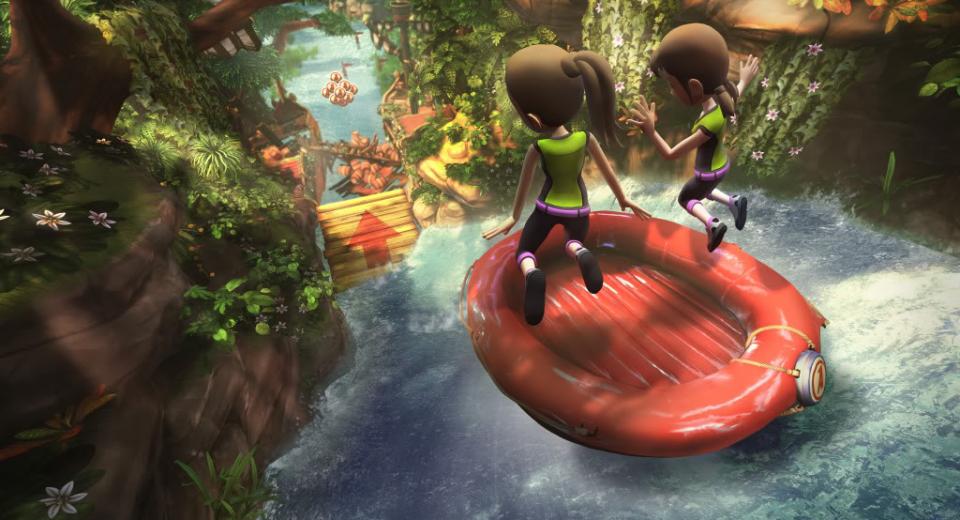 Is the gaming world about to see a revolution? Is gaming finally being seen as an acceptable hobby for people to play on their own or with their families? Well Microsoft definitely seem to think so, what with their recent flood of family orientated titles popping up with the advent of Kinect. This new technology has given Microsoft the potential to bring new games to market and give developers creative freedom to make a name for themselves with help from motion capabilities. Consumers are hoping this is the case too, as Kinect has been highly anticipated across the country with many retailers selling out their stocks of solus packages.

That isn’t to say that there isn’t potential to go wrong in the future though, as Nintendo Wii’s have been left to gather dust in a lot of people’s homes, giving their PS3s and 360s a workout instead. So with motion control on Wii falling out of favour with some, then Kinect could also see this fall in popularity sooner than Microsoft may think. Adding to potential trouble on the horizon, Good Science Studios haven’t produced any games before this new addition to the Kinect family; Kinect Adventures. With a lack of experience their title could flop instantly, or they could hit it off on the right note from the start and ignite their future development career.

The Christmas period is here whether we like it or not, and that is undoubtedly the season where games sell in their biggest quantities thanks to strong PR campaigns from all publishers and developers. Kinect Adventures also comes bundled with the solus package of Kinect so whether it’s a top title or not, it will sell along with the camera. But adding to this potential, party games are being sought after in order to spice up Christmas dos and entertain the family so KA could get snapped up by party game punters. Will people be adventuring over the Christmas period, or will the game be having its own adventure back on the shelf?

All Kinect’s launch titles’ graphical standards are much higher than anything Wii can process now or in the future without an upgraded processor, so Microsoft wins on that front. As was the case with Kinectimals, it seems that Microsoft are keen on the idea that Kinect’s launch titles at least will have a similar appearance to those of the Wii but with far more detail and clarity. The levels you come across on your adventures will be lush and full of life, yet they lack the detail of major titles like Halo for instance, but this is a fine balance that works very well and suits the genre. If you were being harsh then you’d slate Adventures for this, but you’ll be too busy flapping around to complete tasks to notice what’s going on in the background. Whilst you’re navigating there’s music playing in the background that sets the tone for the game and gears you up for the tasks and challenges you will face upon selection.

As expected from these types of games, the sound effects are exaggerated to give the game a greater appeal to a younger audience whilst making your adventure more exciting. So whilst you’re thundering along on a flatbed cart you’ll hear the wheels turning furiously and, if you’re unlucky enough to do so, you will hear a ‘thud’ as your avatar hits one of the obstacles you meant to avoid. Water sounds, and looks good too, whilst you’re rafting along challenging rapids droplets will fly onto the screen and your raft makes a splash as you come back down from a death-defying leap.

Too many games fall foul of confusing gamers with their over complicated menu structure, but Kinect Adventures allows you to breeze through the entire game with the touch of an on-screen button. All functions are enlarged so that they are easy to ‘press’ and not be too fiddly. They are also very clear to read, whilst their design reflects the adventuring spirit by many of them replicating sewn badges that you’ll acquire throughout the game.

So everything is all well and good so far, and for the most parts this positivity caries on throughout the actual playing of the game. After an initial set up guide (which you must watch every time you play) the game identifies you and signs you into your saved profile and lets you carry on from where you left off. Once you have chosen your activity to participate in, be it plugging holes in your underwater glass tank or busting blocks with a handball, your movements are picked up quite well by the camera. Each game challenges you to make different movements from the previous one and they get increasingly difficult over varied stages. You start on beginner levels and then you can advance up through another three sets of levels which will undoubtedly test your reactions and flexibility.

There’s plenty to play for too, given the amount of things that you can unlock upon achieving certain scores and completing adventures. The trophies that are awarded to you can be brought to life through tracking your own movements and sound for them, so don’t be surprised if you put on a cheesy accent to record a voice for a shark or hamster life-statue. Some challenges also reward players by giving them free avatar awards which take the form of clothing such as arm-bands and shirts. This is again something that will appeal more to those who are younger and like to ‘glam up’ their avatars and show off to their friends. Showing off is something that is encouraged by the game too, as pictures are taken of you whilst you play and are saved to your profile that can then be uploaded for your friends and family to join in laughing at. This is something that worked well in the SingStar games, so Microsoft has attempted to replicate their success and why not, it’s a great feature for any game.

There are a few drawbacks to be found in Adventures though and the majority of players will think this game is a title that will introduce you gently to the world of motion control and nothing more. The camera often ‘loses’ you when you’re stood bang in front of it and have not moved out of its view, leaving you frustrated and just wanting to get on with the adventure. Before you start though, you must sit through the instructions to each game whether you’ve seen them before or not which is equally as frustrating. Although many of the games are fun to play and there is a good variety, games such as 20,000 leaks far too often fail to recognise your outstretched arm that is intended to plug a crack in the glass. This wouldn’t be bad if you had endless amounts of room but even with a good two to three feet lateral space, you can find yourself hitting your surroundings in an attempt to complete the task. There’s also the fact that many of the games you will play several times over, not always on the same course, but for many this will feel too repetitive and they may even find the title boring.

So whilst Kinect Adventures will ease you into the world of motion control and full body tracking, it’s hard to see how this (and any Kinect game really) can hope to have dominance in your disk tray, considering the big titles that have been released recently. That is unless you have a young family and/or have game parties frequently, but that’s not to say that this title isn’t fun to play because it is. It is also a game that can help people get a bit fitter before their indulgence over Christmas without being too serious or promoting health benefits.

The longevity is obviously seen to be through the ‘jump-in’ two player co-op whereby the camera almost instantly tracks a new player when they step into the picture and the game then sets itself up around two player play from then on. There’s also an online mode for those who have a competitive gene within them and this allows you to take on friends and strangers to see who the best adventurer is and post your scores onto the leaderboards. The perfectionists amongst you will probably strive to complete KA fully through collecting all living statues and unlocking all the achievements but once you have completed all the events then there’s probably little to keep you hooked as you see much of what the game has to offer early on.

Kinect Adventures is definitely fun initially, there’s no doubt about that but once you’ve played through each game a couple of times then you might just find that the disc will find itself creeping back into the case for quite some time, it may even find itself back in a nearby game store. But for a game that will be played with friends and family, or by young children then the appeal for games like this will be enhanced through watching others playing and enjoying it or making a fool of themselves whilst they do so.

Kinect ramble on and on...

There's been a lot of talk about the Kinect and what it is capable of, but now it's here gamers will undoubtedly test the waters with this tie-in game. Whilst it doesn't boast a great deal of variety in its game modes and possibly has a too child-centred appeal, it is the perfect title that showcases what the new technology can achieve. For what it does though, you'll get plenty of laughs and entertainment out of it watching relatives flap their limbs around at the TV.