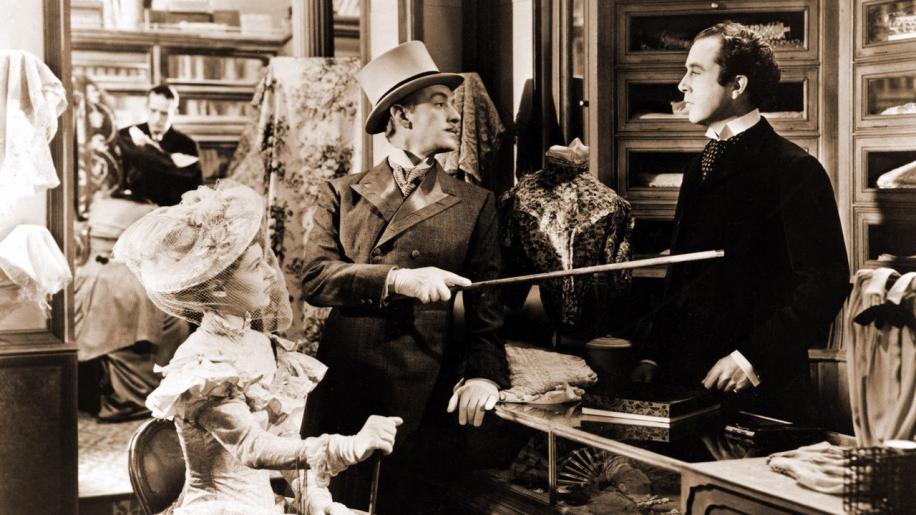 Probably the most delicious in the box of dark chocolates that are the Ealing comedies, ‘Kind Hearts and Coronets’ has undergone an amazing digital restoration and will enjoy a limited cinema release beginning on 19th August, prior to its debut on UK Region B locked Blu-ray on 5th September 2011. This is a movie to look out for and to relish for its wonderful performances and witty script.

Released in the same year as ‘Whisky Galore’ (already out on Blu-ray), this cracker of a movie from 1949 was based upon the novel by Roy Horniman – which was rapidly changed for the screenplay due to its anti-Semitic themes. Modern day viewers have to remind themselves that the film was released not long after World War II when horrifying atrocities were still very much in the minds of the movie going public.

The film allowed Alec Guinness to play eight different roles and, for this, he was deservedly lauded. It’s only now, when you look at the film, that you realise that the one towering performance is that of Dennis Price as he holds the entire film together – and the audience spellbound. It’s a terrible shame that he was overshadowed by Guinness and never really enjoyed the acclaim to which he was due. It was probably the best performance of his movie career and for a Thesp to peak so early on, it made for an act that was difficult to follow. His career declined thereafter, resulting in financial hardship and an attempted suicide in 1954. Life is never fair.

Getting back to ‘Kind Hearts and Coronets’, this is another of those movies where, although you know that murder is wrong, you watch with a morbid fascination and wonder how the protagonist is going to accomplish his dastardly deeds. The over-riding question is – will he get away with it all?

Louis Mazzini’s (Price’s) mother was a D’Ascoyne by birth, but she ran away with an opera singer and was disowned by her family as a result. When her dying wish to be buried in the family crypt is refused, Louis vows to take his revenge. As he ascends the social ladder, he is torn between his love for now married childhood sweetheart, the equally wicked Sibella (Joan Greenwood) and the rather prim, staid wife of one of his victims, Edith D’Ascoyne (Valerie Hobson). His plan to become the Duke D’Ascoyne by bumping off his surviving relatives progresses a step at a time and Mazzini is played with an aloof, cool detachment by Price. He also displays impeccable manners, great charm and self serving wit in this reserved performance.

The movie has been seen as a subversive attempt to undermine the British class structure, with Mazzini rising from being a shop assistant to a partner in the D’Ascoyne family business with an eye on the Dukedom. How dare he! It simply isn’t done! All the way up the ladder we see Louis tolerate the rudeness and arrogance of the D’Ascoyne family as they look down their long noses at him. At one point he is referred to as “a mere counter jumper” when serving a family member in a Ladies underwear shop. When he stands up for himself, he is sacked on the spot – and the audience rallies to support him with their feelings as he plans his next murder.

Alec Guinness is, without doubt, very good as eight different members of the D’Ascoyne family but the one that stands out as a performance is the photography mad, secret drinker Henry. Here is a man who is so hen pecked that he resorts to visiting the local hostelry on the fly for a tincture due to his wife’s disapproval of alcohol. He has also built himself a darkroom in the old garden potting shed to develop his plates, while enjoying a snifter of Sherry or Whisky from bottles marked Developer and Fixative. The polite conversation between Louis and Edith as they take afternoon tea on the lawn is interrupted by a distant muffled ‘boomph’ as Henry is despatched by an explosion in the darkroom. This scene never ceases to tickle my chuckle muscles, as the pair taking tea continue chatting and it’s not until Louis mentions what he believes to be smoke from the gardener burning leaves, that Edith becomes alarmed. I’d love to watch this scene with a large audience to hear their reaction.

The other Guinness moment that stands out is where the clergyman D’Ascoyne is encouraged to have another drink from a decanter that Louis has poisoned. At the very moment the poison takes effect we see surprise, recognition and understanding all reflected in Guinness’ eyes, just before he expires. Very clever comic acting indeed.

The richness of ‘Kind Hearts and Coronets’ isn’t only down to the main stars, it is bolstered by the performances of other experienced actors in lesser roles. Take the great Miles Malleson, who appears as the Hangman. He obviously read the script and then worked out how he could milk the part for all it was worth. There’s the elaborate pulling out of a handkerchief, the faffing about of this fussy man and then the putting away of said item in his coat pocket. These are the kind of things at which great character actors excel. The film is a name spotting delight too. The guard who greets the Hangman is none other than Laurence Naismith, though sadly he’s not mentioned in the end credits. Watch out too for a very young Arthur Lowe (Captain Mainwaring himself) as the Titbits Reporter near the end of the movie who asks if Louis is interested in selling his memoirs.

The new High Def transfer makes it all look so very good but its critical eye does draw attention to a few things. In his guise as the clergyman, Guinness looks great, but we can see the join between his bald skullcap wig and scalp, while the latex clearly wrinkles as he moves at one point. When Louis and Edith take tea, you can see the black thread used to stop a tree branch from waving around in the breeze. As the seafaring D’Ascoyne is about to head for Davey Jones’ locker, those ships look more like models than ever before. Some of the painted backdrops also look exactly like painted backdrops. But we can forgive all of this, as realism would merely spoil the feeling that we’re, perhaps, watching a pantomime for adults which has its tongue firmly planted in its cheek.

This movie has been copied by others so many times over the years and they do say that imitation is the sincerest form of flattery. I can recall an episode of ‘The Persuaders’ TV series where Roger Moore played several members of the aristocratic Sinclair family who meet with untimely deaths. He must have had great fun playing all those characters, but nothing comes close to the original for sheer style and charm.

Make sure you take a look at the alternate ending for the American market among the bonus material that required an extra scene to be shot and tacked on so that our colonial cousins would be assured that crime doesn’t pay. It’s an interesting curiosity of the time.

So if you’ve never seen ‘Kind Hearts and Coronets’ before and you could murder for a good movie, then this could just be your poison. Savour every drop.