Say Hello to My Little Friend 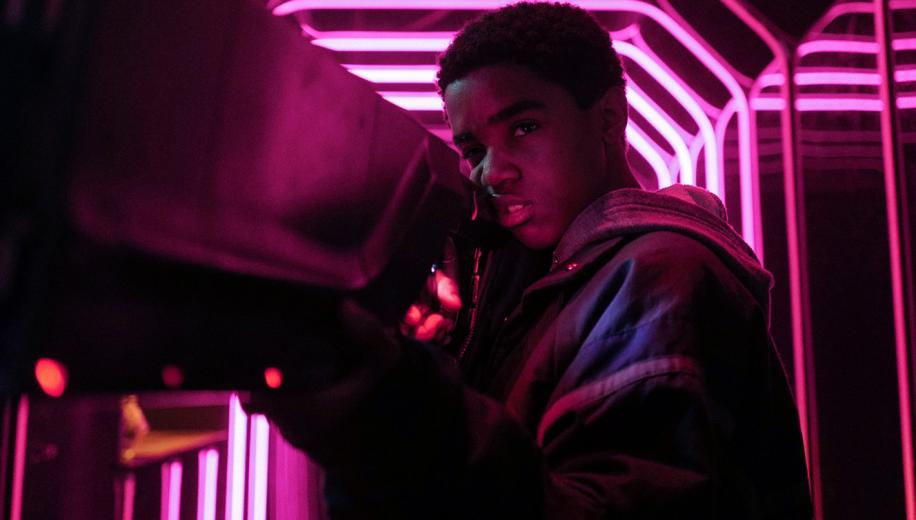 Clearly a high concept project - coming off the back of their excellent little short film Bag Man, which they wrote and directed - the central thrust of the story is relatively generic, throwing Truitt's teenage boy a curve-ball when his ex-con adopted brother comes home, wreaks havoc, and takes him on a wild road trip of potential redemption and estranged brotherly bonding, all by way of strippers and gangsters. But what distinguishes this familiar framework is the slow-burning sense of something simmering beneath, courtesy of Truitt's very literal secret weapon, some kind of energy gun which he found in the ruins of a derelict block, and which only he can operate.


The Stranger Things vibe and 80s sci-fi actioner tributes give it some mileage.

Borrowing heavily from a number of familiar sources - Tron and The Terminator are the most obvious (although there's actually a 40-year-old flick called Laserblast which, if you've seen it, has a strikingly similar premise) - Kin does a pretty good job at delivering small scale, genre-fused, and clearly genre-infused, entertainment. Despite a relatively low budget (which it subsequently failed to make back, largely due to terrible marketing), it has a slick style to it that helps at once sell the urban setting and also the neon-tastic future-tech.

Sure, it doesn't have the sheer ambition of something like Midnight Special, nor of Alex Garland's striking debut, Ex Machina, or even Gareth Edwards' Monsters, despite boasting a budget that bested almost all of them, but the Stranger Things vibe and 80s sci-fi actioner tributes give it some mileage, as does a strong breakthrough performance from Myles Truitt, ably assisted by the likes of Quaid, James Franco, and Zoe Kravitz, and certainly the Baker brothers have delivered an assured debut that should guarantee all eyes on their sophomore work.

Shot digitally, it's been given quite the faux gritty look, which makes some sequences feel like they're a tiny bit fuzzy and noisy but, for the most part, affords the relatively low budget feature a suitably filmic look that belies its minimalist budget, something which is definitely dispelled by the increasingly bright neon colour scheme that takes over the film.


The colour scheme is certainly the highlight.

Lionsgate actually gave this a 4K Ultra HD Blu-ray release stateside, complete with Dolby Vision, and with some of the tones on offer, it's not surprising to see why (although, conversely, given the already relatively niche appeal of this nice but distinctly indie gem, it's also not surprising to see why it wasn't given a 4K release in the UK). The colour scheme is certainly the highlight, quite literally, from the brief explosion at the outset to the hints of it from the energy weapon when it's turned on, to the red-and-pink-hued nightclub sequence which manages to resolve strong blacks and striking neons despite not having the benefits of 4K colour information or Dolby Vision.

Detail is largely excellent, notwithstanding that aforementioned light hazy filter applied, which often keeps this a notch down from demo quality even if that wonderfully vibrant palette and 80s-dialled-up-to-11 style (complete with Tron and Blade Runner 2049 neon highlights when Terminator-vision is applied) is certainly a cut above what you'd expect from a low budget, practically straight to DVD-scale feature.

Kin's Blu-ray release is thankfully afforded a full 3D HD immersive audio track in the shape of this stunning DTS:X mix which delivers the kind of depth and potency that perhaps you weren't expecting from this small scale indie flick, keeping up a pretty persistent level of LFE input, and kicking alive during its more explosive moments and when the Tron-edged score gets to run wild.


Shootouts will leave you ducking your head.

Dialogue remains clearly and coherently delivered throughout, retaining priority over the frontal array where necessary, but also frequently bowing to the more exciting bursts of action that ignite the stage. Effects promote welcome atmospheric presence, bringing the urban Detroit environment to life, but absolutely detonating when weapons - energy weapons or just good old conventional guns - take the stage, particularly in the furious climax. Blasts are afforded excellent directionality, particularly when they take a hole out of your roof, and shootouts will leave you ducking your head.

There's some excellent bass energy to the, erm, energy weapons, thrumming beneath you even as it powers up, let alone as it unleashes a blast - it's tremendous, and goes some way toward helping sell the potency of this tech. The score offers up some nice background tracks, and suitably thematic instrumental flourishes, but there are a couple of sequences that really make a difference - the strip club being an obvious one but the bike-riding Tron sequences still coming out on top, making you wish they'd had more of those electronic beats throughout. It's a great track.

Kin enjoys a surprising wealth of fabulous special features, headlined by an Audio Commentary with Co-Directors Jonathan and Josh Baker and Screenwriter Daniel Casey. There's a decent Making-of Featurette, Thicker Than Water; and an Enhanced Visual FX Breakdown Featurette, as well as a whole host of Deleted Scenes, introduced by the editor, Mark Day, and the Theatrical Trailer.

There's also a great little Featurette called Learned Behaviour: Special Features at Work, which, interestingly, takes an hour-long look at Special Features themselves, and has a few other filmmakers contribute, including motormouth Kevin Smith himself, talking about the effect of special features from the days of Laserdisc on, and how they influenced a whole new younger generation of filmmakers.

Despite this salvo of great featurettes, the real surprise is the original Short Story that kick-started this whole thing: Bag Man, a quarter-hour gem which could have easily played out as the opening sequence of the movie.

The Baker brothers have delivered an assured debut that should guarantee all eyes on their sophomore work.

It's not all that surprising that Lionsgate didn't bother releasing Kin on Ultra HD Blu-ray in the UK, and in fact it's probably more surprising is that they bothered releasing it in 4K at all, but all the energy weapons and neon lights would likely give the HDR-enhanced US release some considerable wow factor.

That said, the UK Region B-locked Blu-ray release is still fairly striking, considering the relatively low budget of the piece, affording strong video (again, those popping neons are a highlight) and not skimping on the sound either, with a full immersive audio mix that they could have easily made a UHD-exclusive. There are also some tremendous extras including the Short Film that inspired this project, rounding out a package which fans should consider a worthy purchase, even if some may still be tempted to import that 4K US disc instead.