A credible Sony alternative to Gears or Halo? 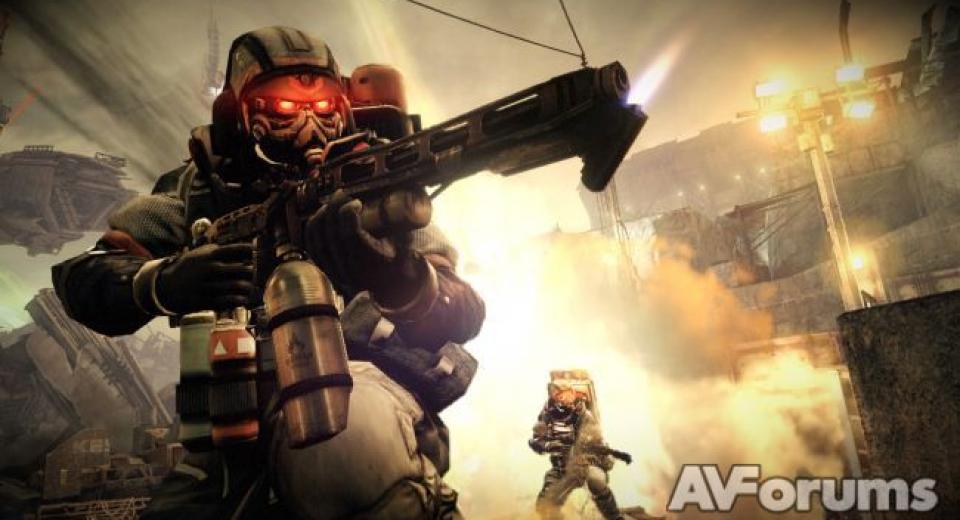 As near as Sony could muster to a flagship PlayStation 2-only shooter, the original Killzone was relentless in its ability to dazzle and mislead from a PR perspective, eventually matching that enthusiasm and sleight-of-hand with an onslaught of disappointingly undercooked features when it finally graced the monolithic black slab. Choppy frame-rates and muddy texturing were the least of a plethora of technical disappointments, all of which were dwarfed by a campaign that fizzled where it should have burned bright, and a lethargic combat engine that left many wondering if Guerrilla Games’ inaugural FPS should ever have been taken so keenly under Sony’s wing in the first place. Halo, it certainly wasn’t. Fast forward to Killzone 2 and ‘those’ E3 target rendering trailers, and critics were more cynical than ever. Here was a game that seemed for all the world as if it would be over-sold and under-produced, and yet just as editors around the world were poised with snarky headlines at the ready, Guerrilla pulled a surprise victory out of the bag. Killzone 2’s visuals not only met those target renders, but due to an elongated gestation period actually looked better in many respects, and this time round they were backed up by some capable AI and endearing - if altogether linear - set-piece driven level design. It was, in short, a triumph; and the sort of fodder that Sony fans were waiting patiently for. So if Killzone represented Sony finding its feet within the genre and Killzone 2 fulfilled on the promise of the PS3 hardware and those controversial trailers, Killzone 3 very much exists in a confident consolidation phase. It’s an iteration that should be allowed to stretch its wings and build on solid foundations to foster the lore and fanbase of its universe, whilst simultaneously acting as a showpiece for Sony’s diverse hardware interests in 2011 and beyond. It’s no surprise to find PlayStation Move support and 3D compatibility included and heavily pimped throughout, and you get the feeling that if Avatar is destined to be bundled with every Blu-ray player bundle for the next few years, Killzone 3 is likely to be sitting right alongside every new PlayStation 3 if the company has its way. It’s an ‘event’ launch then by all accounts; but does Killzone 3 deserve such a status on merit alone? Quite possibly. As you might have guessed given the marketing campaign, Killzone 3 is a bit of a looker - regardless as to whether you’re viewing in 3D or not. It’s difficult to put your finger on exactly how Guerrilla manages to buff their universe to such a high shine, but their now-customary excellent lighting and texture work is filtered through a familiar sequence of post-processing wizardry, meaning this is a title that stands above most of its peers in terms of overall visual quality. Subtle depth of field and some non-jarring motion blur complement the frenetic action sequences, character animation is fluid (although a little too ‘canned’ for my liking), and the whole package ties together into what can be - at times - one of the best-looking games of this generation. There are even notable improvements to the palette this time round. Although a significant portion of the early-game material is set among the same grey pillars and crumbling architecture of the previous outing, Killzone 3 stretches its artistic ambitions way beyond that singular WWII metaphor into altogether different yet similarly ‘inspired’ territory. Colourful alien jungles and a suitably bombastic score bring to mind the Star Wars prequels, with the glowing and reactive fauna eventually clearing the stage for beautifully-rendered icy mountains and techno-future production facilities that smack heavily of City 17’s oppressive alien tower. It’s an altogether more varied and interesting look at the planet of Helghan, and one that complements the light-hearted and heavily-dramatised continuation of the storyline. Speaking of which, both Ray Winstone and Malcolm McDowell steal the show here, not that they’re up against much competition in the audio stakes. Voice acting from the supporting cast is fairly poor (with a script to match), and so it’s up to the few famous faces to chew through the scenery and pull the plot into sci-fi ‘punch and judy’ territory. The pair of them are engagingly wacky whenever in-game cut-scenes conspire to throw them together, and even if Winstone sounds a little too much like his rendition of Beowolf at times, by the end of the 7-8 hour campaign you’ll be playing purely to see what happens to the villains rather than the drab and fairly unlikable team of Sevchenko and Rico - the latter of whom continues to be one of gaming’s most horrific walking cliches. It’s also worth noting at this point that the Killzone 3 audio effects are a distinctly mixed bag. On one hand the gunplay is superbly enhanced by crisp and clear rifle sounds and explosions that seem to echo correctly off buildings and caverns, and on the other are a series of curious mixing options that see dialogue frequently cut off in mid-flow and sound effects buried under the orchestral score during cut-scenes. It’s a shame, because the firefight basics are handled with such high production values that it’s difficult to see how the rest could have taken such a left turn. Positioning itself as slightly quicker than its forebear, Killzone’s combat now sits somewhere in-between the second iteration and the likes of Call of Duty. Fans of the Killzone 2 sensation of heft and weight in both gunplay and movement might be a little disappointed, but for my money it’s a logical choice to take the series forward and enable the sorts of outlandish environmental design that step up variety. Battles shift along with a ferocity and speed that makes experimenting with weaponry seem like a decent option, and it’s clear that although the focus remains resolutely on a linear-path trawl through each level, Guerrilla has injected as much variety into the template as they dared without having to call it a different game. Indeed some Resistance-style bizarre weapon design has even made its way in. You’re now equipped with an extra ‘heavy weapon’ slot in which to stow the likes of a jetpack with infinite chaingun ammo, a multi-rocket launcher, a devastating mortar cannon or a Half Life 2-style bolt rifle that packs an extra-special explosive finish. There are others too, but to describe them would be to spoil some latter-game surprises that really need to be experienced first-hand. One of those secretive devices has already made its way into many reviewers’ ‘favourite weapons’ list, and with very good reason. Despite the additions mentioned above however, the core combat experience does remain roughly analogous to its sibling, largely thanks to the unchanged nature of the Helghast opposition. They remain a difficult opponent with little in the way of physical variety or tricky weaponry, but maintain a fiendish sense of squad AI that punishes mistakes and crushes the spirit on harder difficulties. Flanking and suppressing fire is a key strategy throughout, while the improved walking pace and linear corridor environments lend a distinct flavour of F.E.A.R to the proceedings. The new arsenal simply extends the variety of options you have for dealing with clusters of the glowing-eyed British-voiced Nazi wannabes, and although replaying several sections is inevitable, it’s nice to have a hugely destructive option available in your back pocket once you finally succumb to frustration. Disappointingly for a game mostly based around the adventures of two protagonists however, the complete lack of any online co-op functionality is a mystery that only the developer can answer. There is a rudimentary split-screen mode that will function well for the few people that want to use it, but for a flagship title to be missing a feature now almost standard within the genre is underwhelming at best. Not every game requires co-op support, but to spend an entire campaign in the company of an AI squadmate without including it is baffling. Following the 7-8 hour campaign and messing with Move controls if you have any (it plays surprisingly accurately with the wand but it’s not enough to hang up your joypad just yet), Multiplayer is the real draw of the package. Luckily for us it’s also fantastically well-executed, and a real contender for some of the best console FPS online play of the current generation. Many of you will have experienced a taster of the action through the extensive beta that ran on PSN recently, and the final product remains roughly similar - albeit with more maps. Game types are culled from Deathmatch, Warzone and ‘Operations’ (objective-based and similar to Warzone); but this time around all of the specialised classes are available from the off. That provides a vital hook that was missing from Killzone 2’s fairly laborious grind to unlock equipment, and specialised class-based abilities and weaponry reveal themselves at a fast enough rate to make you want to achieve whatever comes next. Lessons have clearly been learned here from the likes of Halo: Reach and CoD:Black Ops. Along with the excellent pacing, variety of play and class-based trickery, Killzone 3 also now allows you to pilot hunking great mechs on a specialised level, along with jet packs on another. Whilst it’s still some way from matching the frenetic mayhem that accompanies a vehicle-based Halo map, their inclusion here adds another dose of variety, both are superb fun in practice. The mech in particular is an absolute joy, stomping around with bass-filled footsteps and unleashing devastation on whomever crosses your path. It’s not impervious to ground-based fire, but it will require a team-based effort to take down, along with a bucket-load of grenades or rockets. A special mention has to be given to Guerrilla’s endearing support for bot matches, which are available across the full suite of multiplayer types. As a new player they can be an invaluable resource for learning the basics of game modes and maps before heading online, and it’s a feature that had us wishing bot matches hadn’t gone out of fashion quite so profusely in recent years. (If you’re curious about the 3D support, I’d recommend trying it out if you can. I did manage to play Killzone 3 on a Samsung 3D TV for around an hour at a trade show earlier in the year, and although there seemed to be some clear benefit during vehicle sections, it remained an acquired taste throughout. Focus on enemies in the distance was particularly difficult, and I’m still unsure as to whether it’s a positive on the whole.)

Not everybody will be at home with Killzone 3’s expanded campaign palette and pulp sci-fi space marine fiction, but there is no denying that Guerrilla has mastered its specific run-and-gun tactical shooter formula with this release. Combat can be deeply satisfying against either AI or human opposition, and all that’s lacking are player-controlled characters that people can really care about. Maybe that’ll come with their next franchise, but for now Killzone 3’s superlative multiplayer is the pinnacle of its many achievements, and something for the developer to be justly proud of. It’s a game that deserves to be played by any curious shooter fan, and a good yardstick for the technologies shoehorned therein.