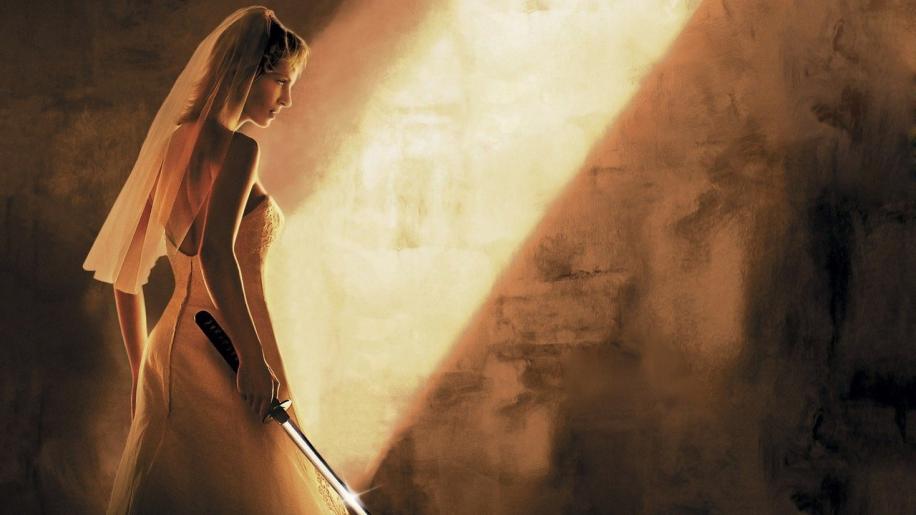 The arguments still rage today. Just why was Tarantino's planned Magnum Opus Kill Bill divided into two instalments? Was it the way the director originally intended the film to be seen, or was it simply a decision made in post? If the latter, was it simply that the original cut was deemed too long for cinema audiences, or was it a cynical attempt to wring more money at the box office?

Until we see the much vaunted Whole bloody affair cut, all these discussions are just moot. We cannot know whether the film plays better in one long version, we can only work with what we have been given. Hence, following my Kill Bill Volume One Blu-ray review I return to the fray with the further adventures of The Bride and her search for revenge.

At the end of Volume one, The Bride had cut a bloody swathe through Japan, going up against seemingly most of the Yakuza before achieving her aim. The film, however, ended on a monstrous cliff-hanger and a reveal that places us a crucial step ahead of the main character.

Volume two follows straight on from the first film, as The Bride has crossed the first two names off her death list - a list of five people who were implicitly involved in her attempted assassination during her wedding to the titular Bill. The targets this time are Bill himself (David Carradine), Elle Driver (Daryl Hannah), and Budd (Michael Madsen). In this second instalment, The bride will attempt to take out all of the above three, but we will also learn more about the character herself. A quite substantial part of the film looks back at the training of the Bride by Pai Mei (Gordon Liu), as we learn exactly how she achieved the awesome martial arts skills that she showed during the first instalment.

Indeed, Volume Two is quite a shock after the garish mayhem of the first film. Whereas volume one was a violent, cartoonish, over the top martial arts movie - volume two has far more character and development to it. Motivation is more a factor here, and this somehow makes the film a far deeper and more satisfying experience in many ways. There are some visceral and bloody moments here, and also a long claustrophobic scene which is quite difficult to watch, but overall this is a far more talky, deep experience - more concerned with the emotions and feelings of the characters.

Many regard Volume One as the superior of the two movies, but I have never really seen it this way. They really are two sides of the same coin - Volume two is the yang to the first film's ying, if you like. Watch both together, and each one enriches the experience of the other and somehow brings the content alive. The problem, as I see it, is that the two films are rather two imbalanced. The way that the films are separated means that they are just so unlike each other that the average viewer is going to find themselves more drawn to one than the other. The one thing that Tarantino has always been good at is pacing and editing. Reservoir Dogs and perhaps more pertinently Pulp Fiction always manage to mix together the violent action with the more character driven moments to make a satisfying experience. The problem with Kill Bill (if there is one) is that the film can sometimes seem so unbalanced. If Tarantino ever gives us The Whole Bloody Affair will he keep events in the same order as they are in the separate cuts? Will the whole balance of the movie remain the same, or will he edit it in a different way so as to make the distinction between the two parts less obvious?

Well, at the moment we cannot know - but if signing on for the Kill Bill experience for the first time you may find that you prefer the first volume to the second. However, if you persevere with this instalment and learn to appreciate how it relates to the first film then there is just as much to enjoy here as there is in the first film.

When talking about Volume One I mentioned that the actors aren't really given that much chance to shine amongst the mayhem. Tarantino has always managed to elicit great performances from the most unlikely sources (Travolta in Pulp Fiction being the most obvious example), and in the second volume his chosen cast really get the chance to show what they can do. Thurman continues to excel as the bride, relishing the opportunity to show the slightly more cerebral side to her character - but this time (unlike poor Lucy Liu in the first instalment) the supporting cast really shine.

Madsen is the kind of actor who really needs Tarantino as a director, or a whale to star up against, in order to show of his considerable skills. His performance here as an assassin racked with guilt is excellently subtle. He is provided with surprisingly subtle dialogue and presents it in a way that really makes you empathise with the character. It is a very economic performance, but is none the less moving for that. I would suggest that Madsen has never been better than he is here.

Hannah also produces a career best performance (although to be fair she hasn't raised the bar particularly high before) as the psychotic Elle Driver, and Carradine provides a convincing blend of gravitas and menace as Bill himself.


Tarantino proves himself to be a master director, substituting the dazzling camera moves and garish colours of the first instalment for a more character driven, and lethargic style for the second film. Here, he truly allows the characters to breathe, positioning his camera in a way that enhances their performances and helps bring out the more subtle physical mannerisms that they use. It is a sign of a true visionary that he can use two distinctive styles within the same story, yet still make the two parts complement each other so well.

It is certainly true that the second instalment lacks the kinetic energy of the first. But the point is that the story that is being told does not need to be served by that style of filmmaking. Volume two merely continues the story of volume one, but is almost the meat of the sandwich. It enhances the flavour of the first part, and without it the whole Kill Bill experience would have been a whole lot shallower and less satisfying. Volume Two may not have the rewatch value of volume one, but it is still an essential part of any home collection that contains the first part. You may find yourself returning to the action of the first more often, but you will still feel the need to contextualise the experience - and for this, volume two is essential.