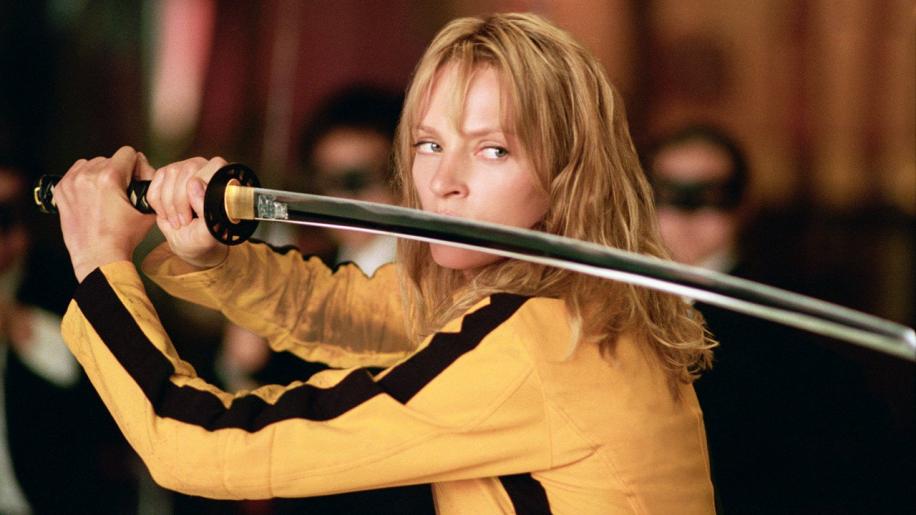 If ever a movie could be described as a guilty pleasure, then Tarantino's Kill Bill vol 1. is it. Combining a host of genres - from anime, kung foo, 70's exploitation flicks, to a good old fashioned tale of revenge and bloodletting - you just know from the first few frames that this movie is going to be something different.

Kill Bill really has a simple premise, and revolves around “The Bride” (Uma Thurman), pregnant assassin and former member of the Deadly Viper Assassin Squad, who's beaten senseless, shot in the head and left for dead on her wedding day. Four years later she wakes from a coma and sets out on a revenge mission to kill her former colleagues - Lucy Lui, Daryl Hannah, Vivica a Fox and Michael Madsen - with the ultimate target being the man himself...Bill. Cue some visceral, hand-to-hand fight scenes, lots brutal swordplay and more blood than you'll find in your average slaughterhouse...and that's Kill Bill.

All of the characters are calculated and utterly determined, and we're left in no doubt that The Bride is serious about her business, the fact that's reinforced as the movie wastes no time in showing us what she - and her colleagues - are capable of. Indeed, proceedings have such a brutal, hard edge to them and contain a level of violence that fully justifies the “18” (in the UK) certificate. Limbs part from bodies with sickening ease, blood gushes in fountains, and bones break with convincing crunches that will have even the most hardened viewer wincing.

If you think this sounds “over the top” then you'd be right; if you think the movie sounds like a re-hash of a dozen other movies then you'd also be right, but there's the genius behind it. It's as if Tarantino's picked elements out of all his favourite movies and genres and thrown them into a blender. What comes out is something that almost defies description, mixing so many elements as it does, and not only elements but a story timeline where the narrative is a juxtaposition of events which are told back to front, with some in order and some out. The amazing thing is, it all works so well. Even if the dialogue is deliberately clunky, even if we don't quite “get” all of the plot strands, even if on first viewing (and this does reward repeat screenings) some of the events are a little confused as to where they sit in the overall story - it's just so well executed that you can't help but be swept along in the maelstrom of sharp direction and editing, even sharper fight scenes and the river of blood that follows.

If volume 1 suffers from anything it's that we don't actually get to see all of the characters; whilst we really get a sense of The Bride (and Uma plays the part to perfection), Michael Madsen appears for all of 10 seconds, and the mysterious Bill is present only by a couple of glimpses and for a few moments of deep, growling dialogue. But there lies another strength also; for much of the background behind The Bride's fateful wedding remains a mystery and we have to wait for volume 2 to find out the motivations of the characters and how the final pieces of the jigsaw fit together. No doubt this will have most people champing at the bit to see the final “episode”, so the commercial decision to split the movie into two parts looks likely to pay off.

I mentioned in the opening paragraph that Kill Bill is a guilty pleasure, and indeed it is. With the amount of gratuitous violence and the gallons of blood onscreen, one can't help but feel that in some way, we shouldn't even [I]enjoy[/I] watching this. But when it's this surreal (sword holders on a plane anyone?), when it's executed with this amount of sparkle and energy, and when you realise it's got its tongue placed firmly in cheek...well what's not to like? Welcome to Tarantino unleashed. Enjoy the ride.