Sweet heavens above, the kid's back! 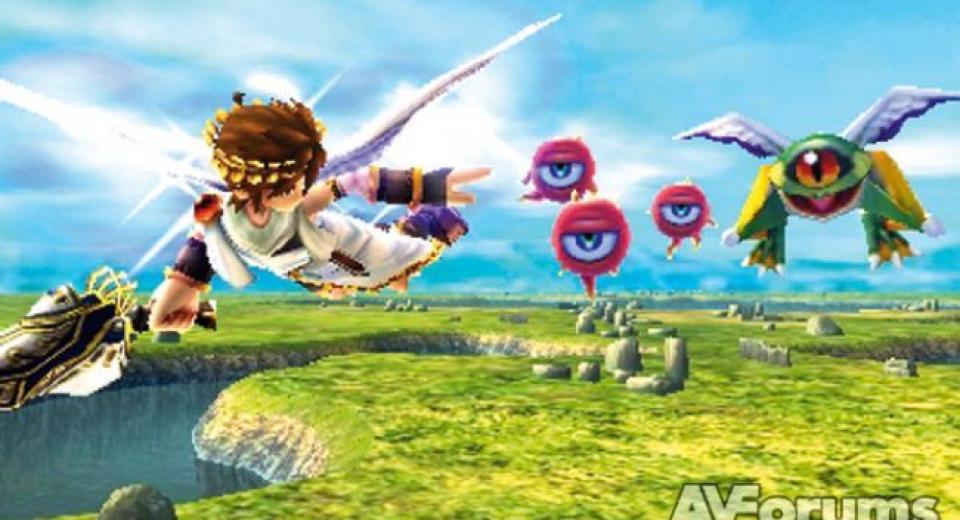 It's been twenty long years since the second, and last, Kid Icarus title Of Myths and Monsters appeared on the Gameboy. The Nintendo subsidiary studio Project Sora, they of Super Smash Bros fame, have taken on development duties for this resurrection. As with the reinvention of any previously two dimensional title (we're talking gameplay wise, not eye-straining gimmick here), the leap into a polygonal world has brought with it some changes to the basic play. Uprising isn't an action platformer as its forebears were but instead a far more arcadey shooter with a twist, that being you play both on-rails flying through the air and fully controllable strolling along the ground.

The story seems typical Nintendo fare, you'd assume a slice of storytelling likely viewed as beautiful nostalgia or plainly uninspiring for those who remember the original, but it gets pretty gripping, with a few good narrative peaks and turns along the way. Medusa (in case you needed telling she's the baddie) is back, and it's down to Pit, your cuddly little angelic protagonist, to take the good fight to her. No sooner is that done, then the real threat to the world reveals itself, and the battle proper begins. The flight sections are kept brief, the reasoning woven into the story, Palutena – your heavenly guide – informs you that you can stay in the air for short periods of five minutes, beyond which time your wings will burn up and you’ll plummet to the ground. The aerial sequences are pure arcade fun, largely involve dodging enemy fire and those on a collision course with yourself, via the circle pad. Aiming is achieved with the stylus, and thus you have the classic twin sticks layout of any flight shooter, something you can apparently implement in its truest form if you have the optional Circle pad Pro add-on - a must for lefties. The only difference in gameplay being those with the stylus can likely get their reticule around the screen in a shorter time, whilst those with the extra stick will not have to suffer any obscuring of proceedings by lumpen hands.

You will find the plastic stand that ships with the game the easiest way to continue playing for longer than twenty minute bursts. The continual need to rap the Left shoulder button to fire, in conjunction with the pressure of applying the stylus and shifting your thumb creates a less than comfortable free holding position and you'll enter knuckle cracking hell in no time. On the face of it, it would seem a pretty harsh criticism, to be tethered to a location with a portable console, and once I unfolded the distinctly flimsy bit of plastic I genuinely wanted to hold it against the game; but I couldn't. Fire it up and you'll forget any quibbles about peripherals and books resting on your lap, you'll lose yourself in unfettered shooting (and melee) action, polished up with the RPG accoutrements that you'd expect from an updated Icarus title, and some that come as a nice surprise.

I’m not the world's biggest fan of the 3DS's implementation of 3D, I find it vacillates between excessive and pointless, rarely being the game changer it is sold as. However, when there are vistas, landscapes and a sense of scale, like Pilotwings Resort, it fits in nicely with the aerial vantage. Kid Icarus in flight is like the aforementioned title on energy drinks and caffeine tablets, not only have you got the landscape firing past your eyes, but the mid-air enemies and projectiles stand out, actually making the jump from background to foreground well. It fits the shoot-em-up style of defined shapes pinging past your retinas, and the graphics, animation and score are all of a high standard, particularly the latter. Transparency effects and a touch of blooming in the right places add a level of sheen, instantly recognisable as a game not possible on the DS.

Aerial combat is exquisite simplicity, a lesson in old school level design. On rails, shoot your enemies before they shoot you and dodge anything that comes your way. It sounds like a formula a child could follow, but many have tried and failed to capture the essential ingredient – it needs to flow correctly. Uprising has the right variety of predictable patterns and nuisance enemies bobbing about the screen, the former an ego boost of cannon fodder whilst the latter remind you of the importance of the dodge function. You can't just hold down the trigger and hope, as firing slows down your movement, so choosing when to let off a volley and when to hold fire is a lesson to be learnt. It's a balance of attack and defend, shoot and move, and Project Sora have shaped this side of proceedings to an almost Starfox level of enjoyability. The sense of speed, 3D on or not, is palpable, the clouds whiz past your face, the few minutes these sections last can pack in a lot of action, and the amount of shots you can rattle off ratchets up the frenetic atmosphere in line with this buzzed up gameplay. Survive and you'll continue your fight on foot in a familiar dungeon battling approach. The stylus controls the camera, it's a bit twitchy and you may curse it to begin with, but once you get used to a quick flick of the wand to about face it ceases to be an issue. If you really can't abide it you can always switch so the Right shoulder button, when tapped, snaps the camera behind you, and when held allows it to be manoeuvred via the circle pad. The level design usually gives you a fair chance of seeing any more troublesome enemies from a decent distance, if not there's often plenty of space provided for you to dodge a few times and gain your bearings. Pit's pretty agile so you shouldn't get trapped. The learning curve makes the early stages pretty easy, but there is replay value in the Intensity Gates, doors you can't access until you've earned enough of the in game currency of hearts.

You collect hearts from downed enemies (or via multi-player), which can be wagered on your potential success of a level, the more you bet the higher the Intensity factor (difficulty by another name), which will bring with it greater rewards and the aforementioned access to new areas. It's not Skyrim, but it's a level of RPG-ness that's distinctly Nintendo, optional but addictive, not hindering those without the correct equipment, allowing the game to flow no matter what, but also putting a hook on the line for those eager to see everything the game has to offer. The constant draw of finding new weapons, testing them, and even fusing them to create new ones belies the game's pick-up-and-play appeal.

Multi-player is available, you can battle it out in a 3 vs 3 or go Free-For-All. The squad battle is entitled Light Vs Dark. Each group of three has a collective health bar, the higher the level of the weapon you've equipped, the more your side's gauge decreases when you die. When a team's life is gone, Light and Dark Pit shows up, and the last player of each side takes on the role of opposing angels in a mano-a-mano duel. Win and you'll likely end up with a few nice in-game trinkets like a spangly new weapon. It's hectic, encompasses a bit of RPG equipment tinkering and pondering, and makes not just a pleasant distraction, but considering you can use the weapons you've gained in the main story, actually dovetails into the overall experience. There's also an augmented reality card game, it doesn't reinvent the wheel but again, it's solid additional content. There's a level of depth to Uprising that isn't instantly apparent. The use of hearts as a currency to be wagered on the completion of levels, the draw of greater rewards to be found in previously inaccessible areas weighted against the potential loss. There are weapons galore to judge against one another in proper RPG fashion, abilities to equip, things to collect, a good use of the Streetpass functionality tied in to trading and weapons creation. If you thought this was a simple shoot-em-up with some dungeon crawling sections, think again. It's bursting with features and content that is far beyond the usual cut-down handheld offering.

Kid Icarus Uprising is a complete package of a game, offering a little bit of everything; polished and doing enough in all areas to make sure it doesn't become a Jack of all trades master of none. The aerial combat is instinctive shooting at heart and plays to this arcade accessibility, as if following a mantra of “don't think, just shoot”. When on foot the feel of an action RPG, story and all, takes over and the game starts to bring with it a scale that makes this one of the few handheld titles to be truly worth the value of a full price release. There are weapons to pore over, areas in stages to go back to, challenges to beat and a central storyline that is pure Nintendo good vs evil, open to all ages but not wholly dumbed down, just quintessential adventure in the Zelda mould, charismatic visuals and catchy score.

In equal parts, fast, fun and fantastic value. One of only a few genuinely must buy 3DS titles.