Does it live up to the original? 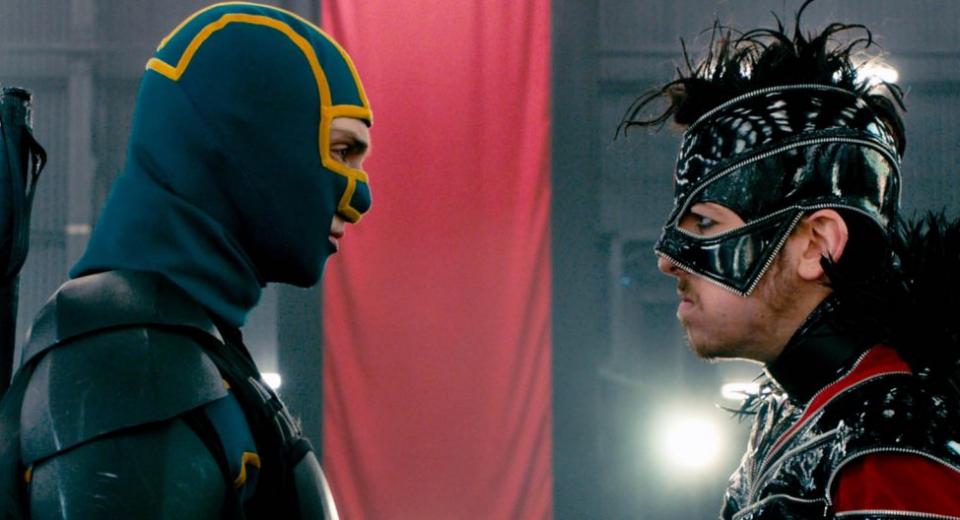 I always had my doubts about how they'd manage to accomplish an adaptation of Mark Millar's controversial, distinctly adult, Kick-Ass. I thought it would turn out like the film version of Millar's Wanted which, whilst still very entertaining in its own right, had to - understandably - jettison much of the truly dark material in favour of a more commercial approach. Funnily enough, whilst I loved his Ultimates take on The Avengers (imagine those books faithfully adapted into an R-rated Avengers movie!), I've always struggled with some of his more gritty, no-holds-barred work, whether it be Wanted - which I still enjoyed - or Kick-Ass, which I actually couldn't stomach reading all the way through first time around.

Give or take a couple of tweaks here and there, Matthew Vaughn's interpretation of Kick-Ass was actually pretty faithful to the comic, standing alongside the likes of Snyder's Watchmen and 300, and Rodriguez's Sin City. Sure, I didn't love it quite as much as any of those tales - the real-life anti-hero superheroes story was being done to death at the time, as you can tell from the above list - but it was pretty faithful nonetheless.

For me, the highlights were Nic Cage's Big Daddy (ironically, his Adam West Batman-inspired super-anti-hero, was probably the best role he's had in a decade) and Chloe Moretz's awesome underage killer, Hit-Girl. I'll never forget the scene where Big Daddy, tied to a chair and set alight, guides his young ward through killing a room-full of villains.

So when Millar started talking about a Hit-Girl-centric sequel, I was definitely interested, but it turned out that his Hit-Girl mini-series was actually merely a stepping-stone on the path to the actual full sequel, Kick Ass 2: Balls to the Wall, which, if you read it, is a very appropriate title. Arguably even more controversial than the first tale, this one involved the gang rape of a teen girl, and unabashed mass murder (body count easily in triple figures) and an up-in-the air ending which would only be resolved with this year's Kick-Ass 3 comic series.

Kick-Ass 2 was written to accommodate the changes made in Vaughn's adaptation of the first book, but unfortunately the sequel adaptation would pay no such respect to its source books, instead not only taking a safer, less controversial (more studio/ratings-friendly) approach, but also losing the direction of Vaughn along the way, who took producer detail in favour of Jeff Wadlow as screenwriter/director. This was a mistake.

The story picks up after the events of Kick-Ass. Mindy Macready (aka Hit-Girl) is training Kick-Ass on how to be a bona fide superhero, and the two of them are still bringing justice to the streets. But when Mindy's new guardian - Big Daddy's old police partner, Marcus - makes her vow to give up her alter-ego, she hangs up her costume in favour of a much more dangerous mission: surviving high school. Meanwhile Dave Lizewski, missing his crime-fighting partner, decides to join a super-hero league called Justice Forever, led by an ex-Mafia enforcer-turned Born-Again Christian, operating under the name of Colonel Stars and Stripes. Justice Forever starts taking down the bigger gangs, once again making the streets safe, but not for long because Kick-Ass's old nemesis, Red Mist - whose mobster father Kick-Ass killed with an RPG - is rallying his own army to take Justice Forever down: a super-villain army.

Kick-Ass 2 is certainly fun. It's unabashedly non-PC, frequently violent, and darkly witty around the edges. Indeed I can see that those who loved the first chapter will find this a fluid follow-on, which almost matches up in terms of style and tone. All the key players return, and they're still the same as last time around. The comic-book style - and even scene-separating writing, and comic-drawn character title-cards - is evident throughout, and the key set-pieces are painfully enjoyable. It's just more of the same. In this respect, relative newcomer director Jeff Wadlow has certainly succeeded. He's cloned Vaughn down to a T. But he's lost something in the process.

There's simply no soul this time around, and the darkly controversial edge has been smoothed off. Almost all of the hardcore violence happens off-screen - and a film entitled Kick-Ass certainly doesn't fall into the category of movie where implied violence is more 'effective' - and all of the worst material in the book has been savagely removed (along with its Balls to the Wall subtitle). Yes it's still R-rated, but if you stripped out the rampant no-holds-barred language (Red Mist's new moniker alone raises the rating - The Motherf***er) and made a couple of minor tweaks, this could have slipped under the PG-13 radar.

Still, it's not like the first movie was wall-to-wall blood and violence, but it did use the harder sequences to greater, darker effect. It also remained more faithful to the material - both in content and spirit. Borne out of a childhood 'what if I tried to be Batman?' premise that comic writer Mark Millar came up with, somehow the freshness of this idea has rubbed off this time around (and perhaps, as time went on, this was inevitable for these particular characters). It doesn't help that the screenplay doesn't really work. By integrating the Hit-Girl and Kick-Ass 2 comic stories into one, you get a whole load of self-doubt, confusion and hesitation thrown into the mix. It becomes tiring watching the characters retire, return to action, retire again, and then wait - painfully - for them to change their minds again... How many people have to die for them to take action? Considering these are the same characters who should've learned their lesson last time out, the answer is simply: too many.

All of the cast members (well, those with surviving characters) return and, for the most part, still work in their requisite roles. Sure they're all much older than their characters now, but Aaron Taylor-Johnson - even after playing adult in Oliver Stone's Savages and playing adult Tolstoy in Anna Karenina - can still pull off Kick-Ass, McGlovin (aka Christopher Mintz-Plasse) still looks about 12, so he's fine as Red Mist / M-F, and the school friends also come across as believably young. It's only Chloe Grace Moretz who has truly changed; a lot can happen to a girl between the ages of 13 and 16, and her character has gone from being this crazy little pixie-kid assassin to a burgeoning young lady on the cusp of womanhood. Only in movie terms, almost no time has passed, which skews the continuity somewhat. Still, who can complain about more Hit-Girl?! She's certainly the best thing about this movie, and - not withstanding some marginally excessive bodily function humour - her alternative coming-of-age is probably the most interesting story strand as well. It makes you wonder about that Hit-Girl spin-off...

Then there's the biggest casting controversy: Jim Carrey. Ace Ventura. Bruce Almighty. The Mask. Here, a broken-nosed, capped-toothed, buzzcut ex-Mafia enforcer-turned-evangelist-turned-vigilante-superhero? Believe me, you've never seen him like this before. It's a great performance. Thick gangster drawl, bat in hand, angry dog at the ready. He's dirty, grizzly and positively menacing. So, what's the controversy? you ask. Well, after the Sandy Hook school massacre he decided to withdraw all support for the film.

It just doesn't make any sense. He surely knew what he was getting into? It's not the first school killing spree in history. If he thought movie violence had any effect on real-life violence then surely he shouldn't have signed on. It's called Kick-Ass 2, Jim, and the first movie was about teen (and younger) children becoming vigilantes and killing nasty villains in nasty ways. Did he think that the second might be a little more Dumb and Dumber?? It's a shame because he gives a great performance (with even a brilliant Ace Ventura nod in there). He's only achieved it a couple of times - Eternal Sunshine... - and this is one of those rare occasions when he becomes lost in the role. You genuinely forget it's Jim Carrey. Pity that now he also wants you to forget it was him.

Certainly the best way to look on and enjoy this feature is as an extension of the first chapter, rather than a fresh sequel. It doesn't have the weight or originality to stand on its own, and feels instead like a series of enjoyable fight sequences strung together on a pretty lightweight, predictable plot that has little substance to it. It's not like the first movie was Shakespeare, but it had some weight to its character arcs (Big Daddy and Hit Girl in particular) plus an - at the time - interesting spin on vigilantes.

Kick-Ass 2 is, unfortunately, considerably more generic. Warriors, Romeo & Juliet, Dodgeball(!). Whatever it reminds you of, the fact is that we all know this story. Sure, it only exists to entertain those who loved the first movie, but instead of seeking to do that in the best possible way, it seeks to do so in the basest possible way. They made this same mistake with Red 2 and its exploding toilets (although Kick-Ass 2 is still the more entertaining of the two). Hell, if they were that interested in action over plot then they could have at least stuck to the original sequel comic's grandiose climax, rather than cut costs and leave the film anticlimactically feeling like it's got an even smaller budget than the first.

Yet if you can look past that and revel in the simple more-of-the-same approach, then Kick-Ass 2 will surely score much higher for you. Personally I think they'd have been better off either just adapting the Hit-Girl short story so that the focus wasn't so confused, or sticking to the harsher controversy of the book to maintain at least a hint of shock value and freshen things up. All we can hope now is that Vaughn returns for the third chapter - if there is one. In the meantime enjoy Moretz, Carrey and some entertainingly violent fun. Nobody is going to argue with the fact that there are far worse ways to spend your time.
Kick-Ass 2 is certainly fun. It's unabashedly non-PC, frequently violent, and darkly witty around the edges. Indeed I can see that those who loved the first chapter will find this a fluid follow-on, which almost matches up in terms of style and tone. All the key players return, and they're still the same as last time around. The comic-book style - and even scene-separating writing, and comic-drawn character title-cards - is evident throughout, and the key set-pieces are painfully enjoyable. It's just more of the same.

Unfortunately, though, there's simply no soul this time around, and the darkly controversial edge has been smoothed off, leaving a generic follow-up which rides high only on the strengths of Chloe Moretz’s ever-watchable Hit-Girl, and a scene-stealing contribution from an almost unrecognisable Jim Carrey. Still, if you can look past the limited vision and instead revel in the simple more-of-the-same approach, then Kick-Ass 2 will surely score much higher for you. There are far worse ways to spend your time.