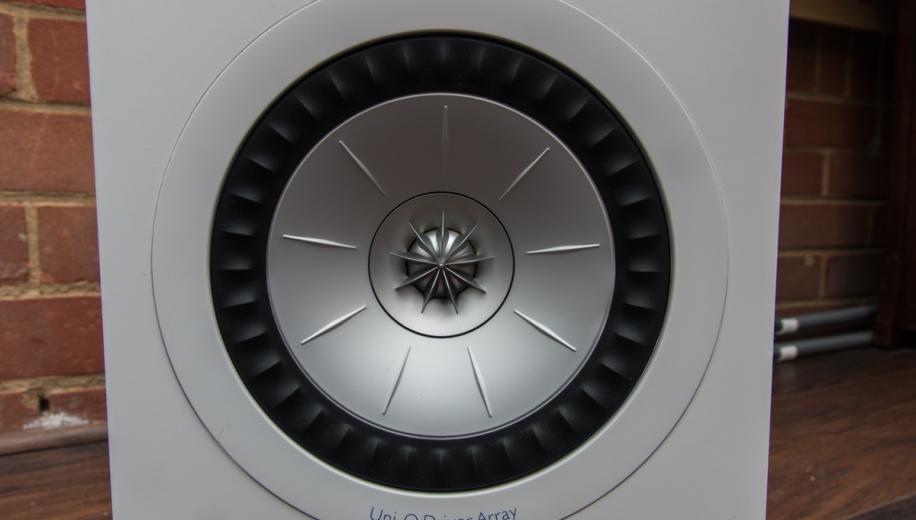 The KEF Q350 is a two-way standmount loudspeaker and the larger of two such models in the Q Series range. This is no less than the eighth iteration of the Q Series that has appeared since the original version launched in the early 1990s which should be enough to make some of us feel pretty old. Continuous improvement and refinement means that the Q350 you see here has pretty much nothing in common with its ancestor – indeed it has precious little in common with the preceding generation.

What it is supposed to have elements in common with are the more expensive members of the KEF family. Elements of driver design and implementation, cabinet layout and general ethos that can be found in products all the way up to the Blade that heads the range. In the Blade, there is both the space and budget to take these ideals to their logical conclusion. Even the R500 at £1,500 and the LS50 as £800 have a little more budget to make their ideas work. Can the Q350 realise the design theories that KEF hold dear at this relatively entry level price point? On paper, the Q350 is a conventional product to encounter at the £500 price point. It is a two-way standmount that uses a ported cabinet – pretty much the standard type for speakers of this nature. The way that the KEF implements these features is subtly different to the competition – and for that matter the preceding Q300. The key to much of this is the use of KEF’s trademark Uni-Q driver. This dual concentric type unit mounts the tweeter in the throat of the mid-range unit. This allows KEF to voice the whole assembly to work together and generate a larger and more cohesive soundstage than can be the case with a normal twin driver arrangement. There should also be a wider ‘sweet spot’ than would be the case in a ‘normal’ speaker.

This particular Uni-Q looks similar to the ones we have seen in the LS50 and R500 but there are some detail differences, most of which concern the tweeter. KEF has fitted a ‘Damped Tweeter Loading Tube’ which helps the handover to the midrange driver. This isn’t visible from the exterior of the driver – although existing refinements like the ‘Tangerine Waveguide’ are. The bass response has also been improved via a new low distortion inductor fitted on the crossover.

More significant changes pertain to the driver and cabinet though. First up, the bass port of the Q350 is now moved around to the rear panel – it had previously been on the front. KEF has used Computational Flow Dynamics (hereafter CFD) to work out the best position and aperture for the port and there are definite shades of the LS50 in the soft touch materials that have been used for the moulding. The port itself is fairly large and with a view to helping positioning, KEF has supplied a pair of foam bungs for them if you are intending to use the Q350 close to a wall. As a result of the port moving to the back, KEF has then taken the opportunity to move the whole driver assembly to the centre of the front panel. We’ll come to the aesthetics of this in a moment but from an engineering perspective, this makes a great deal of sense. The forces on the front panel are now evenly distributed and will dissipate evenly in every direction. The rest of the cabinet can also be laid out more logically – with commensurate improvements on the way that it behaves under load.

The rest of the Q350 is in keeping with KEF products we’ve seen recently. The speaker supports single wiring via a set of decent speaker terminals and the dimensions are fairly competitive with standmounts at the price point. One interesting point of note is that the floorstanding members of the Q Series do without a bass port, instead using a passive radiator system to help augment and control their low end frequencies. This is noteworthy because the Q Series seem to be the only KEF speakers to use this system – making the Q350 and smaller Q150 more in keeping with the company’s standard design practise. The latest Q Series replaces a range that was with us for long enough to become part of the scenery. The use of different materials for the front baffle and the metal detailing, as well as the dark finishes resulted in a speaker that was slightly fussy and possibly a little retro for some tastes (although as someone perennially wedged in the past, I rather liked it) and with the company releasing futuristic offerings like the LS50 and the Blade, it seemed fairly logical that the next set of Qs might be a bit more modern.

Even with this said, the Q350 can be a bit of a shock to the system. The new cabinet is completely free of adornment – no differentiated materials, no finishing trim and no wood. The result is effectively KEF redux – and I think that in the white at least, the result is going to divide opinions a little. The total lack of ornamentation means they end up looking somewhat stark and austere. The black finish is more subtle and – for me anyway – would probably be the colour I’d choose in my living space. That being said, if KEF decides to let its hair down and knock out a small run of Q350s in another colour – red or blue in particular – I think it could look excellent.

I have no complaints about how the Q350 is built though. The cabinets are solid and weighty and feel impressively inert and the white veneer/wrap has been applied with considerable care. An interesting point is that I’ve shot the Q350s without grilles. The review samples didn’t have any supplied and this is how they will be shipped to every country except the UK. Quite why we as a nation have either insisted on having grilles, or KEF has decided that we need them where nobody else does, is left intriguingly unresolved. As a result of the port moving to the back, KEF has then taken the opportunity to move the whole driver assembly to the centre of the front panel

The Q350 been tested with almost my complete standard equipment. This has meant a Naim Supernait 2 integrated amp with Naim ND5XS network streamer and XP5 XS power supply. Some vinyl testing has been carried out via a Rega Planar 6 using the supplied Ania cartridge as well as a Gold Note Vasari Gold both running into a Cyrus Phono Signature phono stage. All electronics have been connected to an IsoTek Evo 3 Sigmas Mains conditioner. Test material has included lossless and high res FLAC, ALAC and AIFF and DSD, Tidal, Spotify and some vinyl. The Q350s arrived run in and ready to go and after a little experimentation with toe-in (even allowing for my very wide speaker positioning I found that only a few degrees from dead ahead are needed), the KEF fairly quickly starts to show what it can do. A nostalgic play of Frankie Goes To Hollywood’s Welcome to the Pleasuredome allows it to show that for sheer three dimensionality and soundstaging, the KEF is a pretty spectacular offering for the asking price. The opening of the title track with the shimmering jungle effect is vast and deep, extending both wider than the cabinets and taller than them. Soundstage height is apparently illusory but KEF didn’t get that memo.

What is especially notable about this is that within this significant space, the KEF places performers and details with real accuracy. This is unaffected by the size of the music you play – it works just as well with the small scale Fink’s Sunday Night Blues Club as it does with the vastness of the Pleasuredome and it lends the Q350 a sense of realism that can be lacking in smaller speakers. This is helped by a good sense of scale at the same time. There is a weight to voices and larger instruments that greatly helps the sense of realism.

There is a sting in the tail to this weight though. The KEF has extremely good bass for a speaker of this size but this can be too much of a good thing. With the heavyweight low end of Leftfield’s Space Shanty it can sound fractionally overblown and sluggish – even with the speakers 40cm out from a rear wall. This is of course easily rectified by the use of the foam bungs but this is a slightly blunt force as using them tends to rob the bass of some of the depth and texture it had before. Having discovered the joys of the two piece bung with the (admittedly far more expensive) Q Acoustics Concept 500, I find myself wondering if such a thing might be helpful here too.

This slight waywardness with the low end is generally more than made up for with the sheer ability that the KEF has with timing and the intangible sense of musicality. This is a speaker that doesn’t have a problem balancing accuracy and realism with a sense of simple musical joy. The ballistic Death From Above 1979’s Outrage is Now! motors along with a true sense of rhythmic engagement and before very long you tend to find yourself listening to music rather than critiquing what the speaker is up to at that exact instant. Some of the ballsiness and sheer energy of the LS50 has made it over to the Q350 and it is none the worse for that.

Where KEF has been clever is that when this forcefulness isn’t required, it doesn’t intrude into the way it handles more gentle material. The 24/192 download of Meet Me In London isn’t really the sort of album that needs to be delivered ‘in the club style’ and the KEF is wonderfully unforced and natural with the way it handles this simple but rather lovely recording. The detail retrieval is what helps to make this piece. It captures the movement of fingers on strings and the slight inhalations before sentences without forcing them into your perception, simply working them into the mix.

This is seriously talented speaker for the asking price but there needs to be a note of caution sounded about that talent. The KEF is sufficiently revealing that while it is by no means tricky to drive, it won’t act as a sticking plaster for underperforming electronics and it will really do its best work with equipment that is at least price comparative and probably a little more expensive. You can hardly critique the KEF for being like this – it’s something that has cropped up with other members of the family and it sort of feeds into the tradition of ‘front end first’ that many dealers still strictly adhere to. You amplification doesn’t need to be desperately powerful though – the Q350 has proved to be impressively sensitive and entirely benign in impedance terms in the time it’s been here. Let’s get my major bugbear with the KEF Q350 out of the way first. I’m not bowled over by how it looks and while we should purchase with our ears not our eyes, in the white especially, this is not a speaker that I found myself coveting while it sat in my living room. Beauty is in the eye of the beholder though and the black finish exists for those of us looking to make a less definitive style statement. Beyond the subjective though, this is a seriously impressive loudspeaker for the asking price. It combines a consistent ability to inform and produce an entirely believable performance with the no less important skill of sounding fun at the same time. The Q350 might best be summarised as 90% of an LS50 for 65% of the asking price and that’s got to be worthy of recommendation.