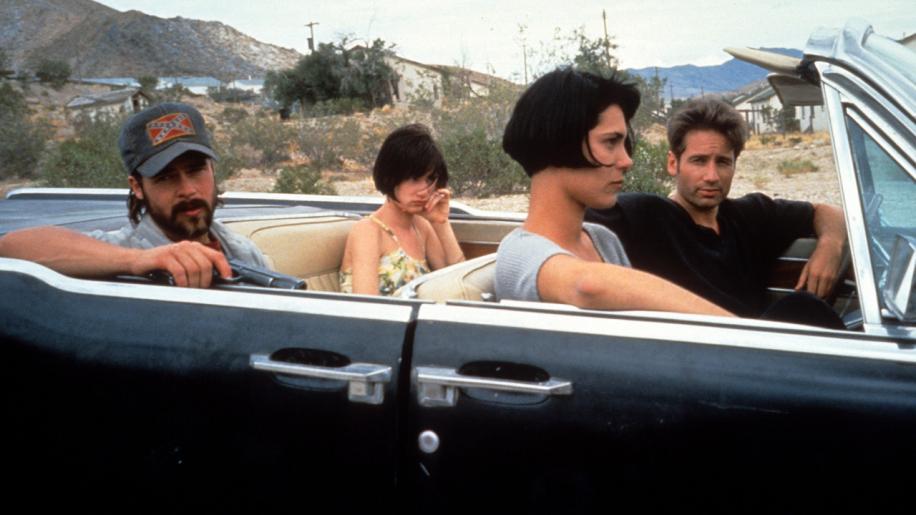 ‘Kalifornia’ was released in 1993 and was directed by Dominic Sena. A name that you now associate with taught action thrillers such as ‘Gone in 60 Seconds’ and ‘Swordfish’, Sena was, at this point in his career, an inexperienced unknown (he made Janet Jackson music videos!). With a juicy script featuring a serial killer and a cast comprised of up and coming superstars such as Brad Pitt (‘A River Runs Through It'), Juliette Lewis (‘Cape Fear’), David Duchovny (‘Red Shoe Diaries’; an old Channel 5 favourite and destroyer of Kleenex!) and Michelle Forbes (‘Battlestar Galactic’ but probably more famous for the Half Life video game!), Sena had all the tools to make the leap into the Hollywood big leagues.

The movie opens with a thirty something beatnik couple throwing a cocktail party in Manhattan (circa 1993). Brian (Duchovny) is a writer who, after penning a short story, has secured a significant book deal. Duly spending the entire grant on a Lincoln convertible and the rent, Brian decides that it’s about time he began his masterpiece novel. He and his photographer girlfriend, Carrie (Forbes), plan to head on a cross country trip to California, visiting a number of locations made famous for the serial killers who inhabited them (in an effort to get Brian’s creative juices flowing). With funds a little low, Brian decides to post an ad looking for someone to share the gas and the company on their week long journey.

Across town, Early Grayce (Pitt) is paid a visit and receives a dressing down from his parole officer, after losing yet another job. Early, who lives in a trailer home with his girlfriend, Adele (Lewis), treats this rebuttal with contempt and simply opens another beer. But the last laugh belongs to the parole officer, who orders Early to make sure that he is at the local college at 15.00 sharp for his new job as a janitor. With the landlord on his back for months of unpaid rent, Early decides that it’s time to get out of Dodge. He spies a certain advertisement on the college notice board and, favouring sunny California over the chilly cold of Pittsburgh, meets with Brian and Carrie. He assures Adele that he has squared the rent and left everything in good order, so that they can make their way to the sunshine state free from burden. But things are not as they seem as Early, breaking parole and federal law in his wake, burned down his humble trailer home and the landlord is nowhere to be found. Brian, oblivious to Early’s sorrid past (he spent years in jail for possession of a firearm), enjoys the novelty of his hick companions, while Carrie is unsettled by Early’s unnerving presence. As the journey across the famous murder sites of America gets underway, they quibble about their polar opinions of Early and Adele; we will soon find out who is right!

‘Kalifornia’ is one of those strange bridging movies (with respect to the director/cast), that is most certainly above average but leaves you with a feeling that it could have been so much more. This is largely due to the central performances, on which the success of this movie hinges. Two are impressive and two, in my opinion, are distinctly average. Former porn star and Scully lover, David Duchovny, and video game voice actress, Michelle Forbes, fall into the latter category. Obviously needing precise direction to overcome his wooden and emotionless exterior, Duchovny is a prime piece of mahogany in this movie. Forbes fares better but with the few snippets of real emotional acting that she demonstrates in a couple of scenes, she could have done a lot more with her character. These two revert to a jazz “cool” and remain pretty much stoic until the closing scenes. I don’t lay the blame completely with the actors, as Sena should really have worked harder to adapt the script on the fly and coax more from his co-stars. On the other side of the acting spectrum are Pitt and Lewis. Finding her place as the bone fide queen of trailer park trash, Lewis turns out another typical, yet enjoyable, performance here. She fills her character’s head with emptiness and tolerates Early’s abusive behaviour with childless indifference. At the outset this seems silly but when you learn more about Adele’s past, the reason for her behaviour becomes startlingly clear; it’s in this manner that her character becomes real. Sure she has a stupid face and is sometimes irritating but you have got to admire Lewis for taking on such a role, when there were undoubtedly many more sugary sweet options available at the time.

The same can be said for Pitt. At the time of this release, the handsome young buck had the world at his feet and could have his pick of A list movies. Instead, in a highly controversial role, he delivers a career defining performance. With a hocking snort, chipped front teeth and a grizzled appearance, Pitt sheds his pretty boy persona and immerses himself in the uneducated and highly volatile character of Early. In a future flash of his epic performance in ‘Snatch’, he really stands head and shoulders above the rest of the cast. Sena, whilst not keeping a close eye on the working requirements of his cast, makes up somewhat for this shortcoming by delivering a wonderfully captured movie. He uses plenty of camera angles and lighting techniques to really produce a very nice picture indeed. The cinematography is at times stunning, with the every frame capturing the on screen action with competency. The opening clichéd, yet striking, shot of Early in the lightning storm stands as a prime example. My only major complaint, with regards to Sena’s (David Lych-esque) directorial performance, is the inclusion of a ridiculous shot of Pitt’s arse (I suppose that this was in the contract but it really looks stupid, although I’m sure that all the ladies will disagree!). The plot, while containing a couple of really excellent scenes, does feature a lot of boring “driving” shots, as the four companions bond on their journey. As the mileage racks up, so does the action content, and this trend continues for the duration. There aren’t any shocking twists but rather a slow boil towards an inevitable conclusion. This is one of the crucial limiting factors of this movie, a flaw that I largely attribute to Sena’s inexperience (at the time). Although there are a couple of violent sequences, they are not enough to distract from the one dimensional nature of the plot (and it’s weak ‘Chasing the Tainted American Dream’ undertone). The other glaring error is that only half the core cast are interesting enough to retain the audience’s attention.

That being said, I have to admit that I’ve always been a fan of ‘Kalifornia’ and this is 100% down to the central performance of Pitt. To see him in action now, ugly and vulgar, is no great shakes, but at the time of this movie’s release, it was a major turning point in the young actors career. The plot, as mentioned, is fairly linear but it is what it is and manages to remain exciting enough for the duration. Unfortunately, it’s dawdle towards the climax means that a lot of attention is placed on character interaction and this is the core point at which this movie falls short of greatness. This is not helped by Duchivny’s introspective and semi-intellectual ramblings about what it means to be a killer; an effort to add depth to the plot through questioning the mind of a serial killer, which fails wholeheartedly. Aside from these issues, the movie remains strangely engrossing and manages to survive the rather hefty run time of two hours (uncut version). Even though their performances vary wildly, the cast somehow gel, and seem to share a chemistry which helps the lesser actors deliver their lines with believability (although Duchovny is wholly expressionless and really had not developed his acting skills at this point in his career to star in this movie, in my opinion; not to mention his ridiculous sex scene during which he thrusts at Forbes from about a mile away!). Sena’s flair adds the final part to the puzzle and the entire package becomes whole and almost realistic, as if you were watching a low budget documentary. ‘Kalifornia’ is a strange little movie indeed but one that I would have no issues in recommending to all fans of a good thriller and it just scrapes a seven here.