So we've got Wonder Woman, Hawkman, and TWO Flashes, are you sure we couldn't have just called it Justice League: World War II? 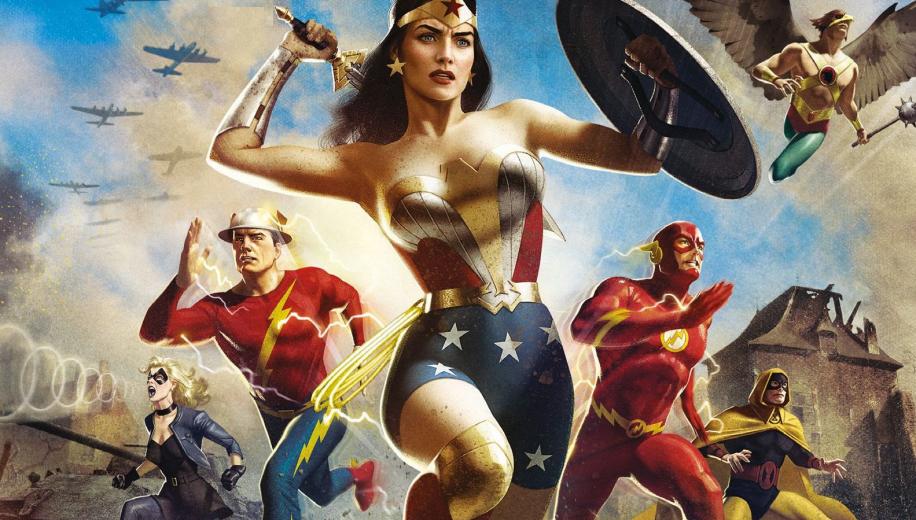 What could have easily felt like the backdoor pilot for a WWII Wonder Woman series that it started its life out as, actually turns into a pretty heartfelt Dirty Dozen/Inglourious Basterds ensemble.

Sure, it's nice - if bittersweet - to finally have a decent DC trilogy/universe now Zack Snyder's Justice League has materialised, however this solid new animated entry just feels like another slap of salt in the wound for a largely incompetent DC live action universe, with this latest chapter in the DCAU yet another painful example of how easy it is to tell a decent one-shot story, packed with familiar icons, and deliver character depth, emotion, humour, action and a solid narrative with some epic setpieces. Bloody hell, why doesn't anybody in the live action department give director Sam Liu - who has been involved with almost all of the best Marvel and DC animated features - a call for a little consultancy work?

When Flash races so fast to save Superman's life that he tears a portal through time, he suddenly ends up in a very alien environment - what looks to be World War II, only now he's behind enemy lines with a set of strangely familiar faces, including Wonder Woman, Jay Garrick's Flash, Black Canary, Hawkman and a scientist called Hour Man who can give himself super-serum that lasts an hour at a time. Joining them on their mission to stop the Nazis, he finds things increasingly odd in this strange new world, not least the fact that his connection to the Speed Force appears to be diminishing...

Justice Society: World War II comes to the UK as a digital purchase available from all major services including, for example, Apple / iTunes, who offer it in 4K Dolby Vision no less, in advance of the more expensive Blu-ray release coming in May (however that does come jam packed with the usual excellent extras - A BTS Featurette, look behind the upcoming Batman: The Long Halloween Part 1, and, perhaps more importantly, a DC Showcase Short on Kamandi and a couple of classic episodes from the DC Vault: Legends Parts 1 and 2). Although we were not able to preview the 4K version, it looks very good in 1080p SDR, enjoying some modest pop notwithstanding the notional limitations of the setting (the latter act of the feature shows just how notional these are, with some impressive tech that glows with a neon pop even without added HDR/DV enhancement). The animation style follows the Archer-esque character design last seen in Superman: Man of Tomorrow, and although occasionally it feels a little simplistic, some of the action sequences are exquisitely staged and brutally intense and the mad city-sized Kaiju (also seen in Superman: Man of Steel) look more like something out of an Evangelion entry than a DCAU - or Archer, for that matter - entry. It's a very good looking piece.

If this kind of feature proves anything, it's that DC don't need to spend so long trying to colour in the lines of some supposedly well-thought-out masterplan, and could instead have a little fun with it

After the game-changing Endgame-esque insanity of Justice League Dark: Apokolips War, the DC Universe Animated Original Movies (as is their needlessly complicated official name) effectively reset the stage for a new round in superhero shenanigans, which kickstarted with Man of Tomorrow, then went back in time for Batman: Soul of the Dragon, and now journeys between the two for a time-twisting go at WWII. Actually envisaged as a pilot for a Wonder Woman WWII TV series - which, based on this, could have been a whole lot of fun - the imaginative outing is a whole lot of fun, blending Legends of Tomorrow wackiness with Dirty Dozen / Inglourious Basterds brutality whilst wrapping it up in a story which is about one character short of a Justice League tale.

Again, it does all of the things that the live action movies appear to be incapable of, putting familiar icons into unfamiliar situations but feeling free to spin them any which way they like. Wonder Woman is a fabulously fearless warrior who enjoys the most violence in this 12-rated affair, kicking Nazis through walls and smashing tanks with her bare fists. Flash goes full Quicksilver for a few fun sequences where he rearranges squads of Nazis so that they fall like dominos, and supposedly pointless characters like Hawkman and Black Canary get somehow made into individuals you care about, whose later plight is thoroughly heartfelt. It's a violent and unforgiving affair, but also not without some nice humour, and the voice cast (headlined by Absentia's Stana Katic, but also including Doom Patrol's Matt Bomer) are utterly committed to the frequently thrilling one-shot tale. If this kind of feature proves anything, it's that DC don't need to spend so long trying to colour in the lines of some supposedly well-thought-out masterplan, and could instead have a little fun with it. Hell, if James Gunn's upcoming The Suicide Squad turned out to be this good, fans would likely be happy.

Justice Society World War II is available as a Digital Purchase from all major Streaming Platforms from 27th April 2021, and on Blu-ray from 10th May 2021.
﻿

Enter our competition to win a copy of Justice Society: World War II on Blu-ray