Just Go with It Movie Review 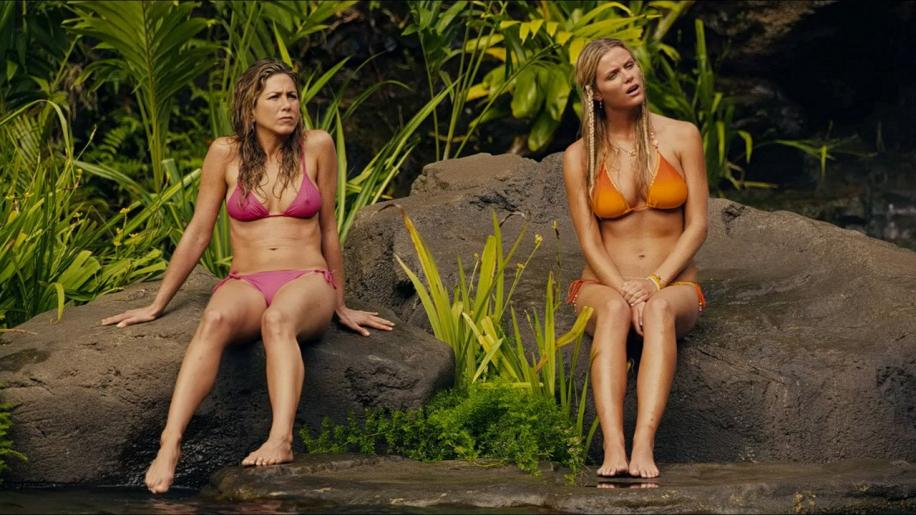 I’ve always liked Adam Sandler. I’ve always hated Jennifer Aniston. I’m not saying that she wasn’t an integral part of friends but, in her standalone career ever since, I only remember a couple of her films (and of her performances) being even halfway decent. And she’s made quite a few films. Recently, I’ve had the opportunity to see her in one of the absolute worst of her generally bad efforts – in The Bounty Hunter. I’d have been quite happy if I never had to see another one of her movies. On the other hand, I still make time for Sandler – he’s had at least as many ups as downs, and some of his better performances have been far better than I would have ever expected from an angry man-child-style comedian of his ilk. Spanglish was good, Reign over Me was great. But in terms of his outright comedic efforts, his last few efforts have been much more dubious. I Now Pronounce you Chuck and Larry was average, and Bedtime Stories was pretty disappointing. Funny People didn’t work for me as either a comedy, or a drama – or both. And Grown Ups was ok, but pretty flimsy. In fact, the last comedy he’s done which I’ve absolutely loved was 2008’s You Don’t Mess with the Zohan. But, for me, he’s still easily in credit, so much so that I was prepared to forgo my abstinence on Aniston films just to watch his latest effort, and see whether pairing one of my least favourite (romantic) comedy stars with one of my favourite comedy stars would actually work out.

Danny Maccabee has found out the perfect way to meet women. After a horrendous wedding day – finding out that his wife-to-be was cheating on him (and hated his nose) – he had a nose job and became a successful plastic surgeon. But his trick with the women is to still wear his wedding ring, making himself out to be a tortured husband with a sick, dying, abusive or drug-addicted wife. For him, it works every time. The trouble comes when he meets Palmer, the stunning girl of his absolute dreams. They hit it off, despite his not wearing the ring, but when she finds it in his pocket, she – understandably – goes nuts. Rather than tell her the truth, he lies his usual lie, this time making himself out to be married; and, to keep her interested, he assures her that he is in the process of getting a divorce. Palmer’s not stupid – she asks to meet the woman, so Danny persuades his loyal surgeon’s office manager, Katherine, to pretend to be his soon-to-be-ex-wife. Can you see where this is going? To make matters more complicated, Palmer sees Katherine’s two children (from her own messy divorce) and assumes them to be Danny’s. Pretty soon the lies start piling up, but it appears to be working. That is, until Katherine starts to wonder whether actually being married to Danny would be such a bad thing...

If you don’t like either Sandler or Aniston, then Just Go with It really isn’t going to change your opinion. That said, it’s far from a bad movie. What it really has going for it is a strong backbone of a story, largely thanks to its borrowing heavily from a basic premise which has been established in a French play, a subsequent US play, and then an adapted 1969 film called Cactus Flower starring Walter Matthau and Ingrid Bergman (as well as a young Goldie Hawn) in the respective roles that Sandler and Aniston would embrace. Hardly a comparison, talent-wise, but more than four decades have gone by, and even I haven’t seen the original, so I can’t really complain about this ‘remake’ (a fairly loose one by all accounts). This strong story works wonders for what could have turned out to be a meandering, lacklustre enterprise purely designed to get you from one gag to the next. Instead the humour is peppered across the decent narrative, which may go exactly where you would expect it, but not without a few interesting moments along the way.

Sandler’s on good form – setting himself up in his usual lovable rogue position, and getting all the beats right without too much reliance on his usual angry man-child manner (not that there’s anything wrong with that). Aniston still has her acting dial turned low, but is at least playing ‘older’ roles, which take note of her age, and seems well game for all the convoluted shenanigans that involve pulling all of Danny’s lies together. Sure, they could have done with a bit more chemistry – their friendship only occasionally drifting into ‘potential relationship’ territory – but this is somewhat compensated by Sandler’s purposeful mismatch with the younger, beach-body babe, Palmer (played by Brooklyn Decker with a reasonable if far from demanding debut performance). You can both see exactly why people would think he was crazy not to want to be with her, and also exactly why he shouldn’t really be with her. She may seem perfect, but she’s just not perfect for him.

Running just shy of two hours, Just Go with It fares quite well at maintaining interest – sometimes thanks to a location change, but mostly due to the new characters that are introduced, including Nick Swardson (who was also in Zohan) as Danny’s cousin, who has to create his own painful but funny alter-ego as ‘the other Dolph Lundgren’, a fictional boyfriend for Aniston’s Katherine; and a bunch of other Sandler-film regulars. Even Nicole Kidman pops up, but, despite keeping her body in amazing shape, she looks like one of the film’s examples of bad plastic surgery – and I’m praying that that was intentional, but I fear that it was not. And, despite her big star status, she doesn’t win the ‘best cameo’ award, which instead goes to an almost-unrecognizable Kevin Nealon (another Sandler regular, also regular on Weeds) as an acquaintance of Danny, who’s had so much plastic surgery that he can no longer drink properly or even feel his face. It’s hilarious.

After watching – and quite enjoying – Just Go with It, I then went on to read a whole bunch of reviews, which universally slated it. Maybe I was just in a forgiving mood. More likely I was blessed by having fairly low expectations, and a lot of tolerance and time for Adam Sandler. Either way, for me, there is still something better than average about this film. It’s not great, don’t get me wrong, but it’s just better than anything I’ve seen from Aniston in the best part of a decade, and far from a bad Sandler film as well. Don’t expect much, and you should yourself pleasantly amused for a couple of hours, which may not be saying much but, with all the terrible rom-coms out there, is a good result.