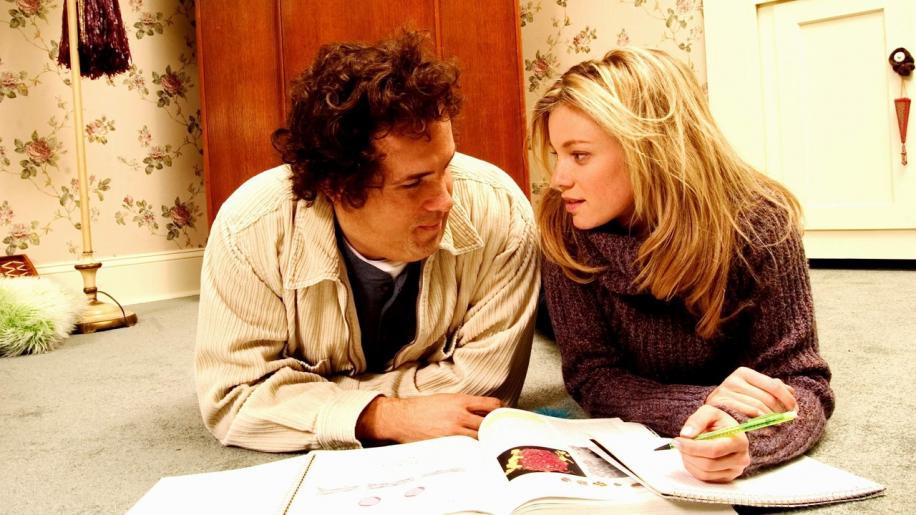 The ceiling of the Sistine Chapel is a monumental piece of art; covering some five hundred and twenty square metres, Michelangelo's decoration is a marvel. I often wonder how he felt when creating it; if ever in the four years it took to complete, he had a 'Monday morning' and had not the energy to up the ladder and paint. Of course I am not trying to draw comparisons to myself and Michelangelo, nor his painting and reviewing DVD's, yet perhaps there is something kindred between the feelings of self motivation; how to soldier on when the job in question has become a monolith. Such feelings are extremely rare, I'll grant, and only ever brought on when the subject matter is rather less than stellar, for you see Just Friends is an awful, awful film. In a world dominated by political correctness, when one should always find the positive, I must confess to being stumped, where is the sliver lining in this, the very blackest of clouds; perhaps I can seek solace in my words.

At high school Chris Brander (Ryan Reynolds) is a big, big guy. He has formed a strong friendship with the school 'hottie' Jamie Palamino (Amy Smart), but he wants more, he wasn't to date and be girlfriend and boyfriend. Unfortunately, she only has eyes for the 'jocks' and sees Chris as nothing more than a very close friend, yes she loves him, but like a brother. During a graduation party, Chris tries to confess his feeling by writing a proposal, of sorts, in her year book, however when a mix up of the books sees his letter read to all the drunken party goers, the pain and humiliation is more than he can bare; he ups and leaves swearing never to be in that position again.

Christmas ten years later Chris is a powerful record executive, rubbing shoulders with the rich and famous, he has become a steadfast womaniser with a set of rules aimed at keeping out of the 'friend zone', the area reserved for men unable to date the woman of his affections. When circumstance forces Chris together with new pop sensation Samantha James (Anna Faris), an ex girlfriend, her ditzy behaviour causes the aeroplane they are in to crash land in New Jersey, Chris' home tome. Unable to leave he decides to visit his family and friends, none of whom he has even spoken too during the intervening years. His mother (Julie Haggerty) is understandably shocked and pleased to see him, with his brother (Christopher Marquette) the bickering immediately starts as if no time has passed, his two best friends Clark (Fred Ewanuick) and Darla (Amy Matysio) pick up the friendship where they left off and finally Jamie herself. She is now a bar tender, single, and sick of dating the 'wrong' men. Unable to get over his high school crush Chris immediately sinks into his old high school persona, right back to the 'friend zone' and through a series of unfortunate events even wears a brace. The rest of the film is made up of Chris trying to woo Jamie, squabbling with his brother, fending off the advances of Samantha and competing against Dusty (Chris Klein), another high school student with a crush on Jamie, all to the back drop of Christmas. Can Chris overcome his high school inhibitions, will Jamie ever see him more than a friend? Does anyone even care?

As I see it there area number of problems with Just Friends, firstly there is no chemistry between the two main leads, Chris is in a constant state of pine, Jamie bewilderment. Reynolds plays Chris as a blithering idiot, granted his slapstick nature is meant to be seen as comedy, but when the lead actor behaves in such an idiotic way, if the audience can't relate to him, how then will Jamie. His heartfelt confession at the end of the film, after all the mess leading up to it, comes off as rushed and unsympathetic, there was no emotion to the scene or in the performance, probably a case of wrong actor for the job. Smart, on the other hand, is a delight as Jamie, she plays an open friendly girl, just the sort that many find attractive; when she is riled her anger is delivered throughout her body language, she is the best actor in the film. Running a close second is Faris, she is insatiable, completely over the top, but somehow managing to remain believable. The one way relationship she has with Chris, sees her dominating the scenes, why she would find him so attractive though is a complete mystery, he shows no affection, in fact is more scared, and completely unable to control her. Secondly the script meanders about never really knowing which genre to stick too; it isn't a romantic comedy as there is no romance nor comedy, it isn't a seasonal film since there is not enough made of the Christmas aspect, it is not dramatic, neither is there any characterisation to study. Whilst I do like the general premise of a successful guy unable to express his feelings for a high school sweetheart, this could have been the stuff of tension and study. Equally there is scope for comedy, the daft things people do when they are in love and try to show it. Yet Roger Kumble seems unable to steer Just Friends in either direction, it is a far cry from Cruel Intentions where he held a tight ship. Thirdly the film is simply not funny. At all. All attempts at humour are crass and idiotic, slapstick has been a mainstay of the comedy film since time immemorial, but here nothing works. Reynolds is unable to carry off the simplest of falls or lines and make them funny. Finally, it is not funny. At all. Ok, so I've already said that, but when a film is billed as a comedy and quite simply is not, it is such a large problem that it needs stating twice. Embossed on the front cover is a quote from Jim Ferguson of KGUN-TV saying “You'll laugh from beginning to end”; well Jim you are making it up, paid to say that were you?

The film has a run time of ninety four minutes, you could have fooled me, I thought it went on for days, I was constantly clock watching and completely bored. Now I am prepared to admit that the film might have could me in a bad mood when I was initially watching it, but after trying to sit through a second time with the commentary, my initial assessment was correct, the film is dull, unfunny without structure or merit. Even when it is all over and the credits are running you can't escape the tedium as Reynolds, in his fat makeup, sings the entire “I swear” song with face full on to camera. It is more than I can bare, life is short and there are so many better film out there, I feel cheated out of the time I've spent watching and now reviewing this film, I'd take Monday morning blues over Just Friends any time. Now leave me alone I'm going back to bed.