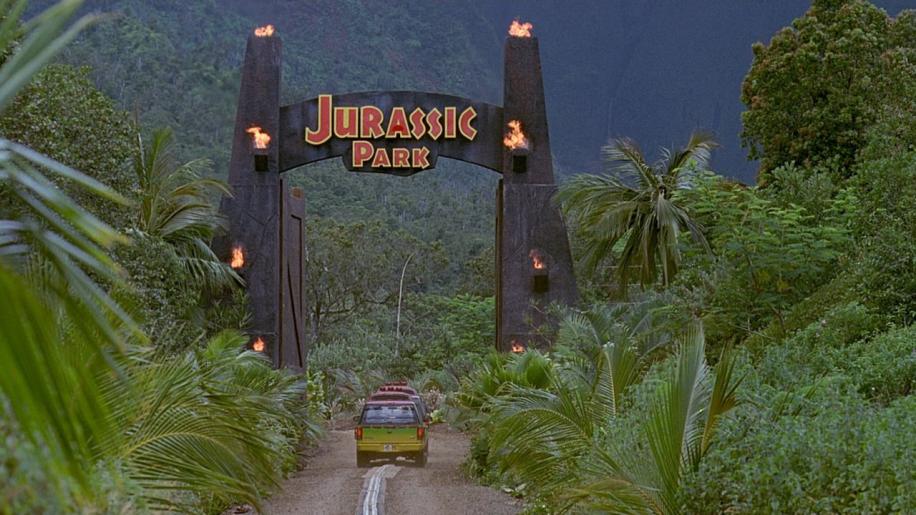 There are numerous editions of Jurassic Park available, and in theory this Superbit version should be the most superior one of them all. If you're wondering how Jurassic Park is being released on Superbit in the first place, it's because in Japan Columbia has the rights to the Jurassic Park franchise. Not that we've got that one clear, how does the picture look?

On a large display, the image from this correctly framed 1.85:1 anamorphic image is generally excellent. It's worth noting at this stage that Japanese subtitles must be switched off via the remote (unless you can navigate the Japanese DVD menus!), but this is no great hassle.

From the opening, we are treated to an edge-enhancement free image, full of rich and vibrant colours with minimal colour bleed, deep blacks and good shadow detail. The colours are particularly solid on the Jurassic Park jeeps: the lime green is realised perfectly against the red livery, with no perceptible colour bleed. In the scenes where the camera pans over various pieces of Jurassic Park merchandise, the reds and blues look crisp and reassuringly solid.

Detail in general is good also: near the beginning of the film we see an archaeologists brush wiping sand from around the exposed fossiled bone of a dinosaur, which looks superb. The texture detail on the fossil is clear, and the sand particles and hairs on the brush are well defined. Excellent. See also some of the facial close-ups, the skin hues look realistic and the detail down to the pores looks great - "Life found a way" (1:31:00) is a good example of this.

Shadows are well rendered also. In the scene where the survivors are in the bunker and the power is off - "Hold on to your butts" (1:33:00) - the detail captured in the half-lit gloom is excellent, with deep artefact-free blacks supporting the scene.

The print, however, is not without problems, although they are minor. In common with my Region 2 edition, the print exhibits a number of scratches throughout the running time, noticeable mainly on bright scenes where the skies show them up. Some of the skies, too, exhibit some noise (again, identical to my R2 copy) - "meet the giant dino" (21:00), and I noticed some grain in the storms waves (54:15). Troubling really, for a Superbit edition, and by all accounts I could find very few differences between my standard Region 2 version and the Superbit. Obviously, the master is some years old now, so a few gremlins are bound to appear, but I was expecting to be wowed by the picture quality on this edition...and I wasn't.

Don't get me wrong, this is still a fine print - perhaps not as sharp on long focus shots as some of todays releases, but still good - but I couldn't help but feel a little disappointed that this Superbit edition wasn't a little more special. Let's be honest, if there's one reason to shell out for another copy of Jurassic Park (because you likely already own it, right?), it's going to be the sound. As with all superbit titles, we are treated to a choice between DTS 5.1 (768kbps) and Dolby Digital 5.1 (448kbps). So are either of them any good, and how do they compare?

Firstly, I would say that I sit firmly on the fence of the Dolby Digital/DTS debate. I let my ears decide, and often where people detect subtle differences (or perceive they do) I hear the same soundtrack. It's a difficult comparison to make unless it's side by side anway, but luckily on this DVD we are able to switch between the two sound formats with a simple press of the remote, rather than having to trawl through the root menus to make any alterations.

I first chose to listen to the opening of the movie in Dolby Digital, and I compared this with my existing Region 2 copy. By all accounts the two tracks seem identical, and as the credits appear on the screen the drums echo around the soundstage crisply and convincingly. Cut to shifting undergrowth, and all channels fill with a foreboding rustle and crackle of breaking branches. Something big is coming....

Overall this is a good example of a a competent Dolby Digital soundtrack. Effects are well placed and rears serve to wrap the viewer up in the experience - watch the "Gallamimus Stampede" (1:34:00), which will have any first-time viewer ducking as the dinos charge left and right, almost running over the camera. The surround work is frantic yet precise, with screeches and stampeding feet zig-zagging left to right and front to back. Witness also the "T-Rex is coming" sequence (1:00:00), the ambient rain effects are superb here, fused with the foreboding thump of the distant T-Rex.

Speaking of "thump", this disc isn't short of LFE action. For years Jurassic Park could be found in many AV demo rooms, and the Dolby Digital track still shows that it still has muscle and poise even by todays standards: the "radar shotgun" scene (6:14) is a good example, where the LFE is a wave which rolls and echos around the room. But of course, when you mention the words "LFE" and "Jurassic Park" in the same breath, everyone thinks of the T-Rex. In the scene which this movie is famous for, T-Rex arrives around the 1:01:44 mark with the trademark ground vibration that will have your sub growling. Comparing this to Jurassic Park: The Lost World and Jurassic Park III, the footsteps do appear slightly subdued, but still there is a reassuring LFE thud that warns of the imminent attack.

All in all a solid affair, with excellent steering, good effects usage and a reasonable amount of LFE to shore up proceedings. But the big question is, how does the DTS fare?

If you mention DTS to any laserdisc owner, the one disc they are likely to own is the DTS version of Jurassic Park. Why? Well for one it was the first home edition to feature a DTS track, and not only that, it's always been widely regarded as a benchmark movie for showing how different the two sound formats can be. And in common with the laserdisc - wow! - do you notice it on this DVD!

I first rewound to the start of chapter one and switched from Dolby Digital to DTS sound. The first thought that occured to me was "Did someone just turn the volume up?" The drums which accompany the opening logos all of a sudden take on a new life: forceful, certainly louder, and with a smile-inducing low end kick. The difference is startling and undeniable, and it had me pressing the fast forward button to my favourite scenes.

The "radar shotgun" scene is another where the DTS soundtrack kicks its counterpart onto the sidelines. The LFE is tighter and deeper, and you really get a sense of the force of the machine. Superb.

Another standout moment is the "sick dino", and this is a moment in the film which I'd not previously noticed for its sound. The rasping breath of the dinosaur is accompanied by a throaty growl of the subwoofer: it's not an "in your face" moment but the LFE channel does a remarkable job of reinforcing the power of this huge creature. Switching back to the Dolby Digital soundtrack reveals the same scene to sound thinner and altogether less convincing. As this scene moves on, we hear the portentious roll of thunder in the background and again, the DTS soundtrack drives this peeling rumble home with more force than its Dolby Digital counterpart: and the atmosphere is all the better for it.

Of course, the real stand-out sound moment of the movie is yet to come, and as T-Rex makes its presence known, we realise with the DTS track engaged that not only is the T-Rex making itself known, but making itself FELT. Because when the first distant thumps sound and the water in the cup starts rippling, well we're talking bass to scare all the cats in the street and annoy any unfortunate neighbours you may have. The LFE here is very deep, and significantly louder than the Dolby Digital version. Gone is the thin sounding Dolby effect, entering stage left right centre and behind is deep bass which almost - but not quite - rivals the levels heard on the later Jurassic Park movie soundtracks. Is it any more detailed? No, I wouldn't describe it as that. It is, however louder, and it's this increase in volume which serves to heighten the sense of drama unfolding before our eyes. I would add that at no time does the increased LFE volume sound overblown....it just sounds correct and in context with the action.

The surround channels also benefit from the DTS soundtrack. I think it's important to clarify that the surrounds are louder rather than more detailed (a common misconception when comparing soundtracks I believe), but in the same scene as the T-Rex arriving, the noise of the rainfall is more pronounced, with the raindrops pounding down all around the viewer: it's certainly a more enveloping and richer experience. Funny what volume can do isn't it?

I described earlier the "Gallamimus Stampede" and if this scene has you ducking in Dolby Digital, it'll have you running for cover in DTS. Again the surrounds are more lively, and this is accompanied by a subtle - but forceful - underpinning of LFE which is absent in Dolby Digital. As Tim gapes at the feeding T-Rex ("Look how much blood!"), in DTS you can really hear the growling and working jaws as the prey is devoured behind you. Fantastic stuff.

In summary, the Dolby Digital soundtrack is a solid surround experience, but compared to DTS it sounds markedly thinner and less involving. I could perceive no further detail in the DTS soundtrack - dialogue remained indistinguishable between the two soundtracks to my ears - but it definately benefits from being louder and less restrained. Both sountracks offer excellent steering across all channels. Excellent stuff. Extras? You didn't import this from Japan to watch a documentary did you? As with all superbit titles, all we get is a high-bitrate video transfer and Dolby Digital and DTS soundtracks. Superbit Deluxe treatment might have been nice though.... A fantastic popcorn movie, with a good transfer and superb DTS sound, this is head-and-shoulders above the R2 version for audio. As to whether it's worth paying the extra to import this, only your wallet and your preference for sound formats can decide....