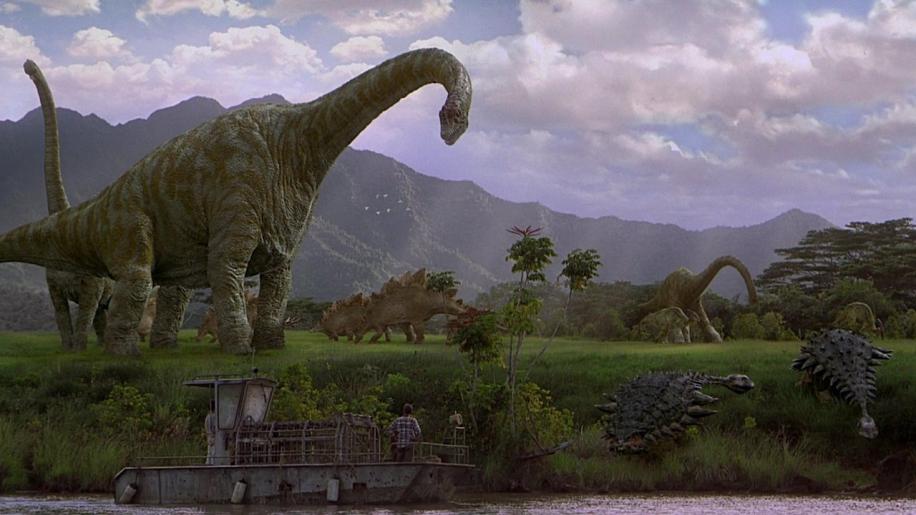 The source print for the disc, as you'd expect is totally flawless without a trace of damage. The anamorphic 1.85:1 transfer offers a vivid colour palette and is free from grain and digital artefacting. If there are any complaints at all they must be levelled at some of ILM's CGI visuals which sometimes look a little muddy and obviously fake. Still, this is the price you have to pay when DVD offers up such a superb image. Now here's a reason to celebrate. For the first time ever in the UK, consumers can go and buy a Jurassic Park movie with a DTS soundtrack. Yup, you read that right, Universal has included both the Dolby Digital 5.1 and DTS 5.1 audio mixes on the disc, and are they ever impressive. Both tracks provide pin-point accuracy for the directional effects lending the whole thing a tangible three dimensional feeling while the deep bass hums and throbs continually as the big dinosaurs go on the rampage. Some might bemoan the lack of subtlety in the mix, but in a movie all about dinosaurs chasing after people, that's not really what you're looking for.

The most exciting aspect of this third title in the Jurassic Park franchise is the presence of the first ever audio commentary. While director Joe Johnston appears to be following in the footsteps of his mentor Steven Spielberg in not offering up his views in the commentaries for his movies, this is more than made up for by the track provided by the special effects team. There's input from Michael Lantieri and Stan Winston, the commentary not only provides plenty of information on the making of this film, but because the duo also worked on the earlier franchise offerings, it fleshes out details on the making of the entire series.
Following on from this are: a surprisingly open and honest 22 minute making of... featurette; a seven minute featurette on the film's new dinosaurs; A Visit to ILM which consists of four featurettes focussing on various methods of using computers to integrate dinosaurs into real environments; trailers; a four minute featurette on the work of archaeologists in Montana; a brief tour of Stan Winston's special effects studio; some computer renderings of the dinosaurs; three storyboard to screen comparisons (The Lab, The Aviary and The Boat Attack); a behind-the-scenes compilation which studies the making of three set pieces (Spinosaurus Attacks the Plane, Raptors Attack Udesky and The Lake); galleries of poster art and production photos; some DVD-ROM material and a rather amusing spoof trailer Easter Egg. Not bad, not bad at all.Stupid and obvious it may be, but JPIII is a first-rate blockbuster which makes for ideal DVD fodder.