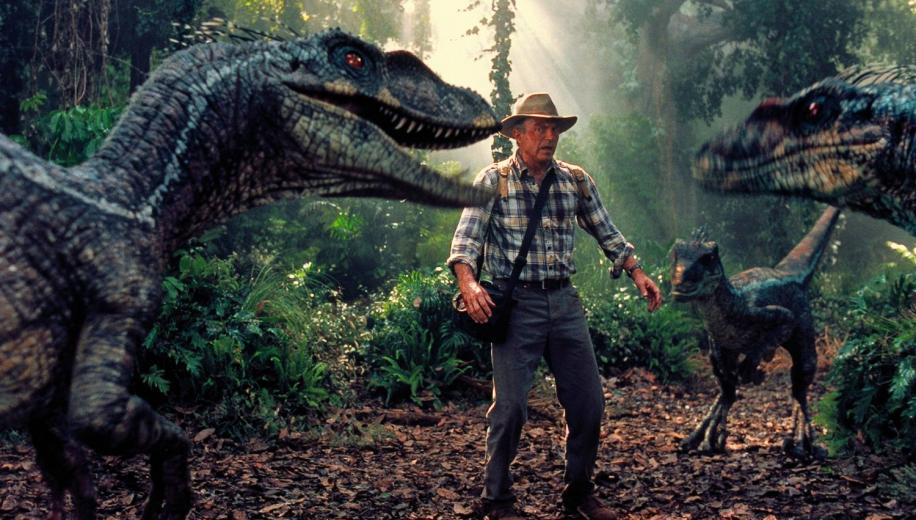 On this island there is no such thing as safe

Removing all pretence of being anything other than an action film, Joe Johnson directs, with an all new production team, Jurassic Park III, and turns in pure popcorn fodder. Still backed by Amblin, but losing Spielberg and Crichton, the story is a simple sentence: a couple try to rescue their son who has crashed on the dinosaur island. And that’s all you need to know. Fill the film with action set piece after action set piece, throw in a newly discovered massive dinosaur (Spinosaurus) to topple the mighty Tyrannosaur, make the ‘raptors even more intelligent, so they are more of a threat, and add some flying beasties, a few ‘red shirts’ and our heroes are having one very tough day. Indeed, Eric seemed perfectly safe and surviving happily until he was rescued!
The film tries to be bigger in scope but it suffers terribly from diminishing returns, and so feels restricted. One could argue for a claustrophobic atmosphere, but I think it’s just smaller sets. Because the plot is so simple, the action set pieces are huge: fighting dinosaurs, extended escape sequences, peril on top of peril with little to no respite. But is feels so forced; so whilst the original was filled with childlike wonder, this is simply childish. The cast have barely anything to do except run, and any attempts at characterisation fall flat with their obvious hat on. And that ending … oh boy. Some feel that this third instalment should be viewed as action fodder, but when it sits alongside such mighty forebearers, in the same set, it simply pales. Jurassic Park III was shot using Arriflex 35-III cameras on 35mm film, and has been recently scanned to a 4K DI, with the obvious caveat that the effects are always going to be limited, and it is this that has been used here for the Ultra HD Blu-ray. The disc presents a native 3840 x 2160p resolution image in the widescreen 1.85:1 aspect ratio, and uses 10-bit video depth, a Wider Colour Gamut (WCG), High Dynamic Range, and is encoded using the HEVC (H.265) codec HDR10. We reviewed the Region free UK Ultra HD Blu-ray release of Jurassic Park III on a Panasonic 65DX902B Ultra HD 4K TV with a Panasonic DMP-UB400 Ultra HD Blu-ray player.

The new scan has revealed greater detail in the image, from skin texture and clothing weaves to jungle leaves and sodden earth. Since this is mainly a set based film, there is little scope for establishing landscape shots, but the opening scene contains a few really choice flyovers of the island which benefit greatly from the higher resolution.

The step up isn’t huge, though, and once again it is left to WCG and HDR to really help showcase the differences and enhancements of this UHD image. Colours are simply richer and bolder, the lush green of the foliage, skin tones, the oranges of the flames, the red of the (unnamed) dinosaur head that was used in one shot; layers of colour not available to the Blu-ray.

Black level is very strong, there hides some greater shadow detail when required with the impenetrable levels greatly increasing depth. The white end of the scale fares very well, giving a naturalism to the image with no clipping excepting in the original source (clouds, I’m thinking of). There are elements of softness that creep in, but again limitations of the source and not the transfer.

The original source is clean and clear and contains a reasonable layer of grain, though one scene (plane flying towards the island) did look a wee bit crawly, but the rest was fine. Digitally there are no issues, even the mist during the Pterodactyl attack was free from banding. The English DTS:X surround track is dynamite! Right from the off the credits showcase some intense bass, indeed bass is a strong presence throughout, being tight and controlled with some astonishing LF effects; spinosaurus walking, the plane crash, the flare inferno etc. There is plenty for the surrounds and overhead channels to get their … teeth into: all the action scenes have pin point accuracy in 3D space, leaves rustling, ‘raptors chirping, crashes, explosions and more.

A couple of tremendous examples are the destroyed plane fuselage being rolled along the jungle floor, and when spinosaurus roars after our heroes as they escape through the fence – that one nearly brought the roof down! Dialogue is never lost in the mix, it sounds natural and given plenty of directionality when required. The score too makes full use of the available speakers and space. It is an intense track and uses any excuse to place an effect in the room. UHD
Audio Commentary – Unlike the other discs in this set, the same commentary with the effects team has been ported over to the 4K disc; it’s not a bad chat track, very tech heavy obviously, but if that’s your passion, this one is not to be missed.
Blu-ray
Audio Commentary – Same as above
Return to Jurassic Park: The Third Adventure – 25 minute feature that delves into the making of the film.
Archival Featurettes – A mighty 78 minutes of features under this heading with titles as: Making of Jurassic Park 3, The Dinosaurs, The Special Effects, The Sounds, The Art, Montana: Finding new dinosaurs and ILM Press Reel
Behind the Scenes – Half hour of material titled: Tour of Stan Winston Studios, Spinosaurus attacks the plane, Raptors attack Udesky, Visit to ILM, Dinosaur turntables, Storyboard to final compilation and Production photos
Trailers Jurassic Park III is not a patch on its forbearers, and suffers from diminishing returns, so whilst it tries to be big on scope, it just seems restricted. It is purely an action film of strung together set pieces, and whist some are quite tense it ends up being quite ordinary – ironically Jurassic park was full of childlike wonder, this third instalment is just childlike.

As the final disc in this set, the package is pretty good. The native 4K image is a small step up in terms of detail, but leaps and bounds with WGC and HDR which gives good colouring and strong blacks. The DTS:X surround track is action packed and bass heavy with some terrific overhead effects. The extras package has all been seem before but does cover all the normal bases.