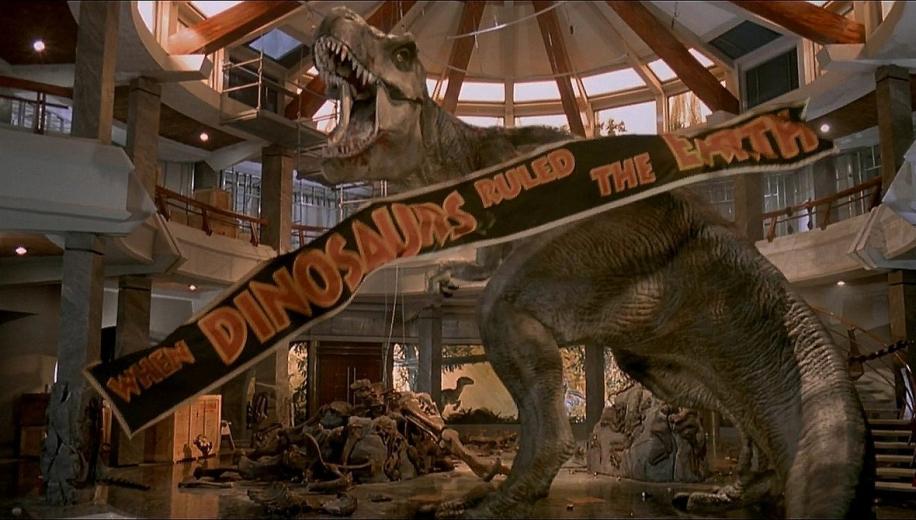 Mr Hammond, on careful consideration I have decided not to endorse your Park.

Jurassic Park is quite the ride. Crafted with typical Spielbergian plot devices, camera moves and peril, coupled with Michael Critchon’s story of out of control creations menacing humans, there was always scope for a winner. Add to that award winning effects, photorealistic CG alongside animatronics, and you have a film the likes of which no one had seen before; it’s so good it still holds up today. The story is crafted to build the tension in layers, without ever seeming forced or going over the top. It introduced a new breed of dangerous dinosaur, (the ‘raptors) which had previously been resigned to palaeontologist’s books, to the world and they instantly became a hit, surpassing the mighty Tyrannosaurus Rex in popularity.
The narrative is filled with Spielberg’s touches, from the opening ‘don’t see the monster’ scene to seeing the wonder through kids' eyes. He doesn’t layer on the schmaltz at all, indeed there is genuine peril to the children and everyone gets their just desserts (excepting Sammy Jackson, who just disappeared). The action is tense, the emotion is palpable, the entertainment is high and most of all the enjoyment is huge. It is a near perfect combination of story, visuals and sound, it is little wonder there have been accolades heaped on it and people still continue to do so; indeed it just keeps being remade as there is little to improve! Jurassic Park was shot using Panavision Panaflex Platinum cameras on 35mm film, and has been recently scanned to a 4K DI, with the obvious caveat that the effects are always going to be limited, and it is this that has been used here for the 4K Ultra HD Blu-ray. The disc presents a native 3840 x 2160p resolution image in the widescreen 1.85:1 aspect ratio, and uses 10-bit video depth, a Wider Colour Gamut (WCG), High Dynamic Range, and is encoded using the HEVC (H.265) codec for HDR10. We reviewed the Region free UK Ultra HD Blu-ray release of Jurassic Park on a Panasonic 65DX902B Ultra HD 4K TV with a Panasonic DMP-UB400 Ultra HD Blu-ray player.


The new resolution does bring out a little more to see

The detail on show isn’t quite the upturn you might expect, whilst the new resolution does bring out a little more to see, this is more to do with the colour depth and greater dynamic range. Staples like skin texture and clothing weaves are slightly improved, while fauna in the jungle is slightly tighter, check out the initial helicopter flight into the Island for example. There are decent edges throughout, from the rain drops on the car windscreens to the sharpness of the flares used to distract the Tyrannosaur.

However, there are places when things do soften a tad, early in the dig, or when the Brontosaurus’ first appear, but this is common on all formats and not an artefact of this transfer. The real meat, though, comes with WCG and HDR which both add significant punch to the image. Colours are that much richer, the greens of the fauna, the yellows of the jeeps and the blues of the skies are that much more vivid, while skin tones are clean and realistic. Black levels are strong and push the frame further than it has been before, the first Tyrannosaur attack, or Nedry’s escape showcase some excellent depth with shadow detail when needed. Whites too hold their edges without any clipping.

The source is clean and tidy, with a soft smattering of grain to keep that organic feel, while digitally there are no issues to contend with.

Although the packaging states that the disc features Dolby Vision, we have been unable to verify this yet. Jurassic Park has always had a stonking sound track, its early laser disc DTS track was astonishing. I’m glad to report that this newly mixed DTS:X track takes what was great and ups it even more! The opening scene is simply wonderful – the wind rustling the leaves overhead while the ‘raptor thrashes around inside the cage, as the park staff try to contain it. The layering, the bass and the volume is simply expert.

There are many instances of the immersive experience, when the Tyrannosaur crashes through the roof of the jeep, the ‘raptors as they hunt Muldoon, the wind and rain as Nedry hooks up the winch – all these place you firmly in the centre. Bass is simply immense; when the Tyrannosaur approaches it is subterranean, but throughout there are many LF effects that add impact to the track. The score makes full use of all the speakers, while dialogue remains clean and precise and is never lost in the mix. A blistering track! There are no extras on the UHD disc; the included Blu-ray houses everything, all of which has been available before.

Return to Jurassic Park: Dawn of a New Era, Making Prehistory and The Next Step in Evolution – Are three parts of a documentary that runs for about an hour and contains plenty of information on the making of the film.
Archival Featurettes – Houses about an hour’s worth of material, titled: The Making of Jurassic Park, Original Featurette, Steven Spielberg Directs Jurassic Park and Hurricane in Kauai.
Behind the Scenes – Houses about 30 minutes’ worth of material titled: Early Pre-Production Meetings, Location Scouting, Phil Tippett Animatics: Raptors in the Kitchen, Animatics: T-Rex Attack, ILM and Jurassic Park: Before and After Visual Effects, Foley Artists, Storyboards and Production Archives.
Jurassic Park: Making the Game
Theatrical Trailer
What’s new with BD Live – Not seen this in a long time. Upon its release in 1993, Jurassic Park was a game changer, and heralded a new way to produce visual effects, an industry that cinema now relies upon. Spielberg, however, knows how to use them, and keeps the story, emotion and character at the front of the piece and allows the effects to enhance the narrative. A winning combination that won accolades and still holds up today.


As a 4K Ultra HD Blu-ray package, the set from Universal is pretty good, the native 4K picture may not be quite the step up in terms of detail one might expect, but the enhancements of HDR and WCG really boost the image to the best it’s ever going to look. The DTS:X surround track is incredible, taking what was impressive about the previous releases and adding that extra layer to make something truly special. The extras package, although having been seen before, is nevertheless still all encompassing. It comes recommended.