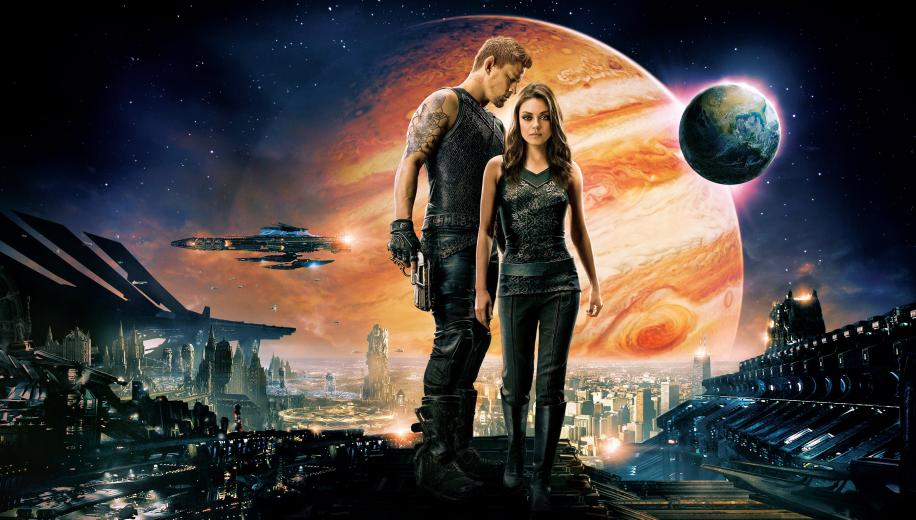 Desperate to rekindle their Matrix glory days, The Wachowskis return with Jupiter Ascending, a grand-scale space opera which has lofty ideas and impressive visuals but precious little else.

Commissioned by Warner Bros. to come up with an original new franchise – not just one movie, but the first of many – the Wachowski siblings have delivered a wonderful new universe rich for mining, full of epic worlds and stunning architecture, wondrously futuristic vehicles and strange new species. Yet their far reaching narrative gets bogged down in unnecessary bureaucracy; aiming ever towards the classic Star Wars trilogy, but more often drawing parallels with their frustratingly flawed prequels. Seeking to recapture the magic, the siblings stir into the pot the ingredients of a dozen other familiar features, at its best riding high on Star Wars scale fantasy, and Matrix-style worlds-beyond-worlds, whilst also injecting more than a little Dune and Flash Gordon into the costumes, settings and mysterious alien-fused population (*cough* scientology *cough*), and, strangely, dabbling in a bit of Teen Wolf and The Princess Diaries when it comes to its Channing Tatum/Mila Kunis headlining act, who commit to the action with verve but struggle to carry the weight of sheer exposition (and ultimate silliness) that the directors burden them with.
It’s ironic that the studio wanted the Wachowskis to do the opposite of what they did on the Matrix – rather than compress three stories into one, they wanted Jupiter to become a franchise-ready first chapter. That just leaves us with a bunch of 'setting the stage' ideas and little else. It seems intent on bombarding us with information and exposition, at the complete expense of delivering to us compelling characters and a decent story at the heart of it all. Indeed, nobody here appears to have learned from the Star Wars prequels, with a story at the centre of this vast and magnificent universe that is actually woefully simple, and strangely mundane. Much like Phantom Menace’s treaties and trade embargoes, Jupiter brings us little more than a legal dispute. Wills, inheritance, probate, land deeds and family squabbles surrounding who gets what. It’s an odd concept upon which to found an entire space opera (but not the first time) and, despite the desperate attempt to give it a far bigger, grander impetus (again, like Phantom), it struggles to escape the rather small scale narrative that restricts the otherwise epic scale framework. Whatever else concerns you about the film proper, it looks indisputably stunning. Whether you watch it in 2D or 3D, the visuals are undoubtedly impressive; however incoherent the action sequences may get, in the vein of Michael Bay, they look amazing. Warner delivers Jupiter Ascending on a Region Free UK Blu-ray which marries up to its US counterpart in every respect, delivering dual 1080p/AVC-encoded 2D and 1080p/MVC-encoded 3D High Definition video presentations on separate discs, each of which is at the height of its game.

The 2D version is frequently near-perfect, affording us wonderful detail even in the most heavily CG-driven spectacles, as opulent alien civilisations are portrayed with equally imaginative vessels, the likes of which we have hitherto probably only seen in anime (I wonder whether the Wachowskis have ever watched Neon Genesis Evangelion, for example). Facial textures are rendered with impeccable attention to detail; facial hair, clothing weaves and background observation – they all look excellent. Digital defects are nowhere to be seen, which is a relief, and the colour scheme – vibrant, rich and natural in most of the earthbound daytime sequences, whilst skewed slightly blue for the night scenes (and suitably stylised off-world) – is supported by deep blacks sporting impressively resolved shadow detail.


Whether you watch it in 2D or 3D, Jupiter Ascending has no problems in the visuals department.

The 3D version is almost as easy to praise, notwithstanding the fact that – again bringing us back to Bay/Transformers territory – it struggles to keep up with some of the more frenetically-designed action sequences. It affords us impressive depth and fully-rounded objects residing within, which proceed to fly, glide and get blasted across the screen, but when the action goes full-tilt, it’s all a bit much to keep up with (to be honest, it doesn’t fare much better in 2D). Thankfully Jupiter Ascending spends plenty of time meandering between action, allowing you to soak up the majestic visuals, and this is where the 3D truly excels, allowing us a wondrously imaginative backdrop to get lost in, even if the story hardly has the same effect. The Blu-ray of Jupiter Ascending includes a superb Dolby Atmos soundtrack that can be listened to in 5.1, 7.1 or various Atmos configurations.

Cas Harlow reviewed the audio using a standard 5.1-channel setup - Dialogue remains precise and clear throughout, notwithstanding the affected mumbles of the lead villain, taking centre stage across the fronts and centre channels. Effects are numerous and almost as imaginative as the visuals, allowing the surrounds to come to life with an array of blasters, energy shields, gravity boots, thrusters, and so forth. Explosions bring with them a suitably invigorating low end rumble, and the LFE actually plays more subtle accompaniment pervasively through the piece. Quieter scenes still emanate atmosphere, with ambient flourishes picked up on to bring the environments to life with almost as much verve as the visual panache affords the feature. The score occasionally feels disjointed – there are even a few edits where it feels like a scene has been abbreviated at the last minute, and they didn’t quite know how to blend in the surrounding score – but is for the most part a suitably immersive accompaniment and certainly provides yet more fodder for what is an unquestionably hard to fault aural offering.


The Dolby Atmos soundtrack is highly active, keeping pace with the frenetic action on screen.

Steve Withers reviewed the audio using a 7.2.4-channel Dolby Atmos setup - Jupiter Ascending is the ninth Blu-ray we have reviewed with a Dolby Atmos soundtrack and the new format continues to go from strength to strength. As you've probably realised by now, the film itself is chock full of dazzling visuals and frenetic action sequences, giving the sound designers the freedom to fully utilise the overhead speakers. As a result Jupiter Ascending is probably the most comprehensive Atmos soundtrack we have reviewed to date, with the overhead speakers constantly being used to create ambience, enhance the action and completely immerse the viewer. During the numerous 'gravity boot' chase sequences, the various spaceships frequently fly overhead, whilst laser blasts zip past you and explosions rip through the room. It isn't just the action sequences that benefit, a pivotal scene with bees allows the sound designers to move the buzzing insects around in a 360-degree space, whilst in another scene a computer voice is heard from directly overhead. Later in the film some characters are held prisoner beneath a see-through floor and their captors footfalls can be heard overhead. Michael Giacchino's score is also well served by the immersive soundtrack; whilst the low frequency effects provide real presence to the larger space ships, thunder storms, explosions and the finale that takes place inside Jupiter's Great Red Spot. At times the Dolby Atmos soundtrack can be almost overwhelming because there's so much going on but there's no doubt it fully replicates the Wachowskis' artistic intentions.

Over half a dozen featurettes adorn the disc, and whilst they're all fairly short, they are longer and more substantial than the usual EPK fluff, and add up to a more rounder picture of the production's background, with segments on the two lead characters, the premise, the costume, culture and interplanetary world designs, the mutant/alien/hybrid creatures, and the action sequences. Despite the near-universal critical panning that the film got, there’s one thing that appears to be commonly appreciated – the Wachowskis’ visual eye. From the architecture (ships or buildings) to the technology (those jet boots; the ‘floating’ satellites around the various craft), the sheer visual opulence of this experience makes it something to behold. Indeed, it makes the action sequences – which vary from impressively and innovatively staged to blandly repetitive – colourful and creative at least to the eye. There’s undoubtedly plenty of classic Wachowski excellence in this bloated, overly-complex feature, but where it shines through the most purely is in the visuals.


A monumental misfire of epic proportions, you’ve likely never seen anything like it before, but it sure as hell looks and sounds amazing.

Jupiter Ascending's UK 2D/3D Blu-ray release sports outstanding video and audio, both for the 2D/3D options and a Dolby Atmos soundtrack. The picture is near perfect in 2D and equally as good in 3D, although the image sometimes struggles to keep pace with the frenetic action. The Dolby Atmos soundtrack is simply stunning, delivering a highly active sound mix that perfectly compliments the images on screen. Although if you don't have Atmos yet don't worry because as the Dolby TrueHD version is almost as impressive. There are a slew of fairly short featurettes which offers some background into the production and, if you're a fan of the film, this is a no-brainer. For everyone else, we'd recommend a rental first as the film is an acquired taste.


You can buy Jupiter Acending on Blu-ray here