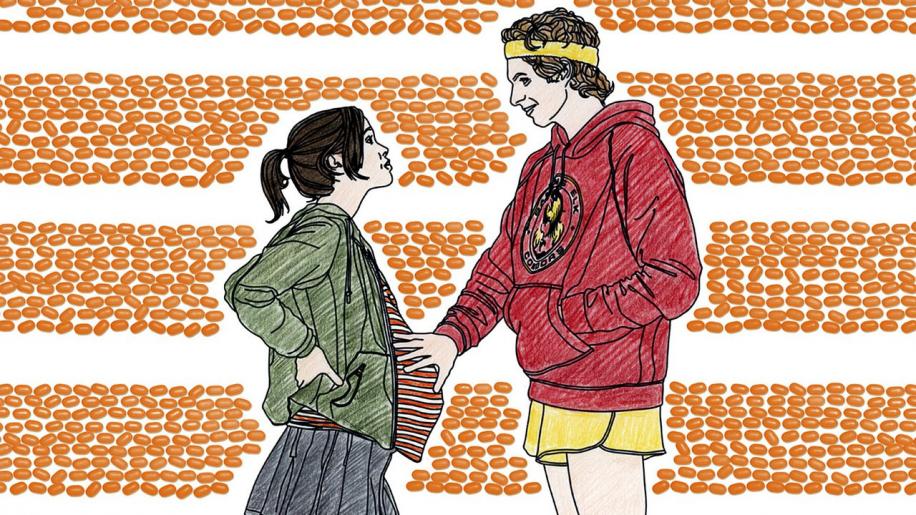 Movies about unexpected (often teenage) pregnancy have recently been quite popular with audiences - first the hilarious Knocked Up, with Seth Rogen and Katherine Heigl, and now the sardonic Juno, which was up for several Awards. And you know what, you can totally see why. Not playing for dumb audiences, or offering up some kind of sugar-coated, sickly sweet Hollywood angle, Juno is all script (for which is actually won an Oscar) and it is all clever. I think that it is great that we are finally getting some decent dramas which depict real life situations in a more real, more relatable way, and Juno is a prime example.

After three positive tests, Juno is finally starting to accept the fact that she is pregnant. At 16, she takes the news pretty well, although the would-be father in question is quite reticent about the whole situation, slightly overwhelmed by impending fatherhood considering he's still running track at high school. Her parents are great, but with abortion not even really a choice she wants to make, she has little option but to look towards adoption. It's not long before she comes across seemingly the ideal young couple, and strikes up and arrangement with them, but things don't quite go as simply as she had hoped for.

Juno takes quite a serious subject matter and deals with it in a mature but interesting fashion. It is quirkily humorous, playing off situations that we can all relate to without ever drifting into using slapstick, gross-out or even smart-ass tactics. It is never sombre or depressing, instead poignant and astute, never eschewing the gravity of the teenage pregnancy dilemma, but still painting the picture with an underlying sentiment of hope. This is probably all largely thanks to the remarkable young actress portraying the titular character. Sure, ex-stripper Diablo Cody's debut script is sharp and Jason 'Thankyou for Smoking' Reitman's direction is adept, but now-20-year-old Ellen (Shadowcat from X-Men) Page is truly noteworthy and does a remarkably job in this substantial leading role. She brings a certain refreshing honesty to the part, often speaking her mind and displaying considerable emotional range. She portrays the character as tough-talking but still vulnerable, a smart cookie who still does not always make the right decisions, mature for her age and yet still with a lot to learn.

Rounding out the cast we have some solid supporting performances, with - oddly enough - Jennifer Garner, arguably the most famous person of the lot, the only one who didn't really seem convincing in her part as the adopting wife. Michael “Superbad” Cera is suitably shell-shocked as the father-to-be, J.K. “Spiderman's J.J.Jameson” Simmons says all the right things as Juno's smart working-man dad, West Wing's Allison Janney has some of the best lines as her supportive step-mum and The Kingdom's Jason Bateman plays the adopting husband with the requisite desperation to recapture his youth.

If I have one minor quibble about Juno, it's that the male characters come across as a little bit lame, perhaps with the exception of J.K. Simmons' father. For all the effort put into portraying what this poor young girl is going through and the tough decisions she has to make at an age when she shouldn't have to make them, the writer appears to have shallowed-out some of the male characters into more one-dimensional entities, immature and not even particularly likeable. Still, it does not ruin your feel for the movie, which is clearly a well crafted semi-indie-flick that tells a powerful story in an understated, easily accessible, and refreshingly realistic way. Recommended.