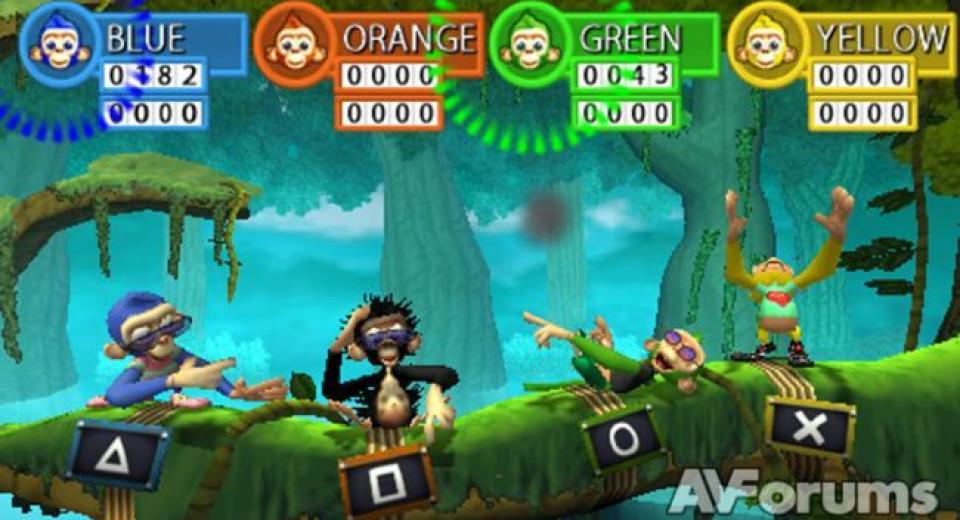 The Buzz! series has been going strong for five years now, spawning a range of quiz-based party games and a handful of titles aimed at the younger market. Jungle Party was the first Buzz! Junior title, originally released for the PS2 in 2006. It consisted of 40 minigames, although only 15 have made it onto the PSP. Console versions support a bespoke four-player peripheral with large coloured buttons. The move to Sony’s hand-held device has meant its place is taken by the PSP’s face buttons.

Jungle Party’s minigames can broadly be split into two categories. Some are original jungle-themed activities such as “Odd One Out”, in which you have to quickly identify which of four hippos is wearing a different costume to the rest. The other games are variants on established sports, like “Elephant Baseball”, which sees your simian using a baseball bat to strike balls fired from an elephant’s trunk into a destructible wall.

Each minigame pits four monkeys against one another, in any combination of human / computer controlled characters. The game can be played single player, but it’s clearly meant as a social experience. Multiplayer is possible using either Network Play or the Pass Around mode.

One of the appeals of the Buzz! Junior games on the PS2 was that everyone could sit around the television and play together. The transition to the PSP will make for a different experience; whether the benefit of portability compensates for the loss of a shared screen and effortless mulitplayer remains to be seen.


The jungle setting is carried off competently: the monkeys are suitably cutesy and the environments are vivid and colourful. The accompanying music complements the game well enough, although after a while it can become irritating.

However, you most likely won’t notice the soundtrack at all, because you’ll have turned the volume off after five minutes of the games' commentator repeating the same phrases ad nauseam: “Well done, blue!”, “That’s it, yellow!”, “Lions can eat up to 75 pounds of meat… in a single meal?” (That last one is repeated at about 30 second intervals throughout “Lion Taming”.)

Credit where it’s due, though. Game instructions are handled neatly: three or four bullet points appear during loading, telling the player what they’ll need to do. Mostly they can be boiled down to, “Press X when you see an X on the screen”, but as this game is aimed at a younger audience, it’s an appropriate way to present the information.

Any of the fifteen minigames can be selected for either a one-off practice attempt, or as part of a customisable championship. Alternatively, there are ‘short’ and ‘medium’ modes, in which you play five or ten randomly selected games (respectively), and a ‘long’ mode, in which you play through the whole collection.

The problem with many of the games is their similarity to one another. For example, “Ostrich Egg” sees you holding X to sneak towards an ostrich in order to steal its egg. If it looks up, you must quickly release the button to freeze on the spot. The mechanic of holding the button for as long as you think you can get away with it is the same in both the “Lion Tamer” and “Hippo Bath” games.

It doesn’t end there. “Totem Poles” and “Rocket Riders” are more or less the same game presented differently: a list of button presses you have to work through as quickly as possible without making a mistake.

This kind of repetition can be found all over the collection. At least half of the minigames are practically redundant because the mechanics are duplicated elsewhere.

None of the minigames are particularly inspired, but by far the weakest is “Crate Drop”, which is nothing more than a game of chance. There are four suspended crates and you have to choose which to stand under. Once everyone’s settled, they open and out falls a prize, a penalty or nothing at all. There is no skill involved; the only vaguely strategic element might be that you could decide to stand under the same crate as another monkey, although against the AI this is impossible because they move too quickly and you can’t tell where they’re going until they’re already there.

But all that aside, the most disappointing aspect of this game is the “Pass Around” mode, which smacks of wasted opportunity. It’s multiplayer in the loosest sense of the word: two to four players take it in turns to tackle each minigame against three bots. Points are awarded to participants for their performance in their respective games but there’s no direct competition.

It could have been so different. Take “Primate Penalties”, a simple penalty shoot out simulator: rather than the implemented system of one player against three AI monkeys, it could have been arranged so Player 1 chooses where to shoot the penalty, then Player 2 chooses where to make his simian goalie dive. Once both selections have been made, the game would unfold and either the ball would go in or be saved. This would at least have given a sense of competitive play.

What you have instead is parallel single player games, where one player waits for the other to finish their turn. It sucks the fun out of the one part of the experience that could really have given the game value.


Due to the copy-and-paste approach to the games’ mechanics, you don’t even need to have played all fifteen to feel like you have done everything there is to do. Cute monkeys and the occasional humorous setting aside, this is a shallow game that is unlikely to keep players coming back.

The single player experience isn’t the focus of the title and offers little in the way of replay value, while the “Pass Around” mode feels lazily implemented. Redemption should have come in the form of its “Network Play” option, but the cost requirement for multiple copies of the game (not to mention multiple PSPs) is unjustified for the limited content.

Jungle Party is a whittled-down port of a four year old title, but that’s no reason for it not to be fun. The problem isn’t how old the game is, it’s that the minigames simply aren’t interesting and varied enough to recommend.

However, this issue is compounded by changes in the children’s game market over the past few years. Smartphone App Stores are overflowing with minigames such as those in Jungle Party, where they can be picked up for 59p or, in some cases, for free.

It’s not that Jungle Party is a terrible game. Spend five minutes with it, and you’ll probably have quite a positive impression. But unless you have at least one more PSP and another copy of the game, it’s unlikely to have any kind of lasting appeal.

Jungle Party was a minigame collection originally released for the PS2 in 2006. But the 15 uninspired minigames to make it onto the PSP won't have any lasting appeal, even for a younger audience.