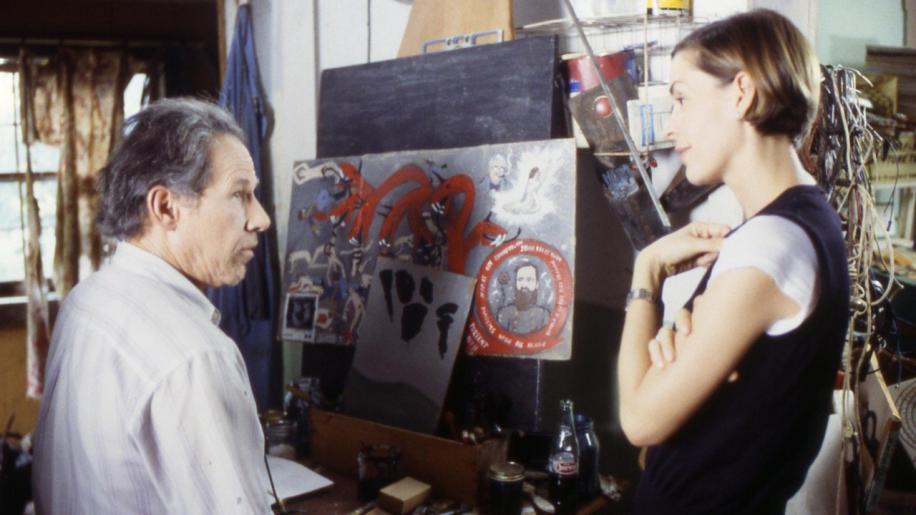 I feel it is only right that I start this review by making it clear that Junebug is not my preferred type of film. My viewing tastes lean towards the lo-fi and indie but they rarely cross the line where a Venn diagram of such features intermixes with family drama. My choice of movie rentals often seems as shallow as a Pringle's dip and I physically brace myself when I hear the words “emotional” and “heart-warming” in a trailer. It is not that I dislike the subject material per-se, more that I frequently find the underlying message less than a revelatory epiphany intended to give me a new insight into the human condition as one imagines the director/creator planned. Far too many of the films that masquerade as complex character studies have a fairly well trodden formula at their heart and thus can become as predictable as a Hollywood blockbuster. There are however a few exceptions to this rule - I'm pleased to say that Junebug was one such example.

Directed by Phil Morrison, it marks a detour from his burgeoning career as a music video director. Having previously adapted part of a play by writer Angus Maclachlan into a short which focussed on Southern characters, they team up here to tackle some of the interesting peculiarities of such Bible belt inhabitants. Junebug tells the tale of a successful art dealer from Chicago, Madeleine (played by Embeth Davidtz), who falls in love and marries George (Alesandro Nivola). In her line of work, an exciting artist from North Carolina catches her eye and she plans to travel there to talk him into signing with her gallery. Given that George originates from the same area, they marry up the business trip with a chance to visit and meet for the first time her in-laws. On the face of it, the basis for the film may sound not too dissimilar to Meet The Parents, but this is far from the stylised comedy of such schtick.

George's family are not a collection of lovable absurdities but instead they carry emotional baggage and the kind of intricacies that take a film's entire duration to completely unravel. They represent a fairly unified wall to Madeleine's attempts to get to know them. The matriarchal mother Peg (Celia Weston) is somewhat forceful and uneasy with this interloper, ever on guard against the reason she is perhaps not needed by her son anymore. The father Eugene (Scott Wilson) is stoic, carrying his feelings without breaking his poker-face and communicates only briefly with those around him, appearing the very definition of laconic. Meanwhile George's brother Johnny (Ben McKenzie) is sullen, rude and ever distant to his brother's presence as if holding a grudge for grievances long forgotten by his sibling. The only true ray of light in this increasingly maudlin scene is Johnny's pregnant wife Ashley (Amy Adams) whose unbridled enthusiasm and child like wonder at Madeleine's very being is uplifting for both her and us as viewers.

What proceeds from this initial set-up is an unfolding of a woven family tapestry. The characters all have personas shown to others and yet retain separate relationships based on different criteria. It is a unique study of the compartmentalisation of a person's life and the way in which each of us attempt to either escape certain familial responsibilities or embrace them. Morrison uses a continual technique to pepper the entirety of the film, choosing to harness a form of equilibrium found within the family home. He shows us the vacuum of life by delivering shots of empty rooms and silent scenes which fade into or out of those which contain activity. George himself typifies this use of distancing the viewer, as he is seen outside the family home when he arrives, letting his wife acquaint herself with his cooing relations. Not wishing to draw unfair comparisons to which a young director cannot hope to live up to, but certain shots of stillness have an almost Mallick-esque quality to them, showing us the quiet that exists before and after the turmoil of human existence and in this case familial relationships.

The direction itself may be inspired but there are arguably holes in the characterisations. The archetypal hick has been committed to various media for the use of comedy but rarely is the figure utilised in a genuine attempt at subtlety. Not having lived in the Bible belt of America, I find it hard to criticize the creations populating this film, but the more cynical viewer may listen to some of the hyper-enunciated dialogue that is spouted from the mouth of the artist or Ashley and half expect Burt Reynolds to appear in the bushes armed with bow and arrow. Luckily, the director pulls back just before any complexities of the interwoven relationships are lost in a mire of stereotypical Southern drawls. The funny thing is that the character arguably most unrealistic - Ashley - is the one around which so much of the story revolves. This may be a tale of newly weds, kindred ties and the return of a prodigal son but it is only through Ashley that we get to glimpse the inner workings of the Johnsten clan. She not only acts as a ray of sunshine in an otherwise bleak conglomeration of mono-syllabic figures but she also acts as a narrator of sorts. She doesn't provide a voice over but she does ask and answer many of the questions that are on the audience's mind and draws our attention to the machinations of the household.

The end result is a give and take parable that eschews glamorous modernity for a stark and intimate portrayal of blood ties and personal progress from one's origins. When I first viewed this film some time ago on television, I didn't catch the start and what I initially saw I assumed to be akin to a live action version of King of the Hill, however those simplified assumptions were swiftly dispelled as I was drawn into a melting pot of conflicting emotions. At heart this is a character study, with the central character being the family unit itself rather than a mere individual. All the roles are played capably and unite to create a portrait of life that is ever shifting and greater than its constituent parts. At times touchingly quaint, yet at others heart-wrenching and unflinchingly stark in its assessment of small town life. There are no simplified morals to the tale, which is perhaps why I warmed to it, instead the links that bind the characters are never fully explained 'nor should they be. This leaves a wonderfully ambiguous work in many ways that relies heavily on unspoken feelings, half conversations, body language and subtle looks that can be mulled over and re-watched numerous times, which is perhaps the best compliment I can pay it. A contemplative gem of an independent movie that deserves far more appreciation.