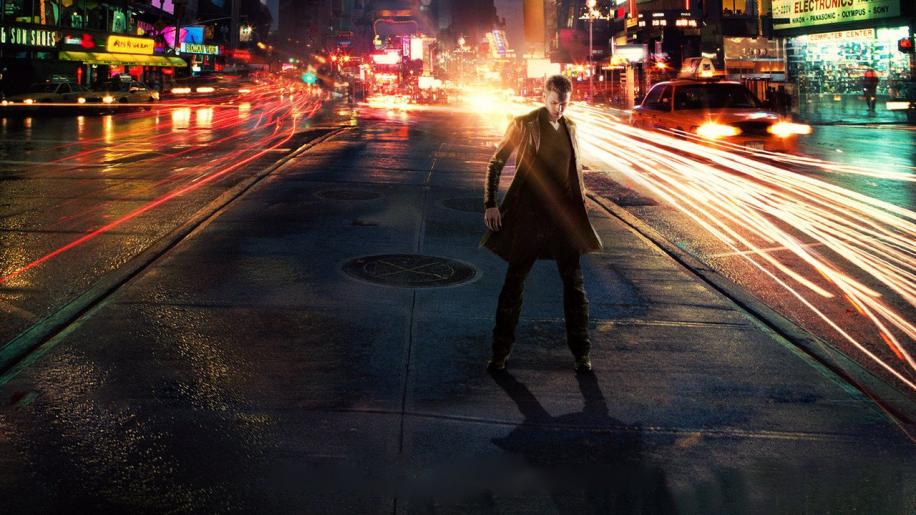 When I first saw the trailer to Jumper at the cinema, I must say I was more than excited by what I saw. The string of clips looked rather promising and certainly whetted my appetite for a fuller viewing. Unfortunately though, I missed the chance to watch it whilst it was doing the rounds at the flicks, so I've eagerly awaited a blu-ray disc release ever since.

Jumper is loosely based upon the novel originally written by Steven Gould and Doug Liman was given the task to convert the story into a movie. Along with the help of no less than three script writers and given his directing credentials from The Bourne Identity, there was probably no one better around to put together a fast paced and fast moving science fiction action film. Although I've not read the novel, I understand the plot is also meant to move equally as swiftly in the written form.

Now the movie is only 88 minutes long and Jumper certainly doesn't waste any time in hanging about. The introduction leads you straight into where it's headed in no time at all. There can however be an indication with a film of this length that the source material either lacks enough depth to span across a longer duration or that the whole movie is going to be a rather rushed affair. As I say, with Jumper there's certainly no hanging about and you'll be up to speed with what it's all about within the first 10 minutes of the film with the remainder being a pretty frenetic ride.

The focal point of the film revolves around a young chap by the name of David Rice (Max Theriot). At the age of 15 he discovers that he has the uncanny ability and power to be able to teleport himself anywhere he likes. He discovers his powers quite by chance and also quite luckily for him at a rather opportune time; when he was just about to drown. Teleportation - wow! Now that's a pretty cool trick to have when you're a teenager eh? Rice bowl (as he's more commonly known) is far from being a cool dude though. In and amongst his schoolmates he is just a bit of a chump really, he's not actually very bright and if that wasn't enough, he's also a bit of a no hoper with the girls.

Skip 8 years later and Rice bowl (Hayden Christensen) has dusted himself down and turned everything in his life around; living a very upbeat life for a 23 year old in a plush New York apartment. Having dropped out of college and flunked his exams when he was 15 didn't do his career prospects any good whatsoever, but matter did that not. The ability to be able to teleport yourself anywhere you like, whenever you like, opens many doors (excuse the pun). Along with a little bit of imagination, hopping in and out of bank vaults suddenly becomes a pretty worthwhile substitute for a normal day job.

Now, most Superheros tend to have some form of conscience, take for example one by the trade name of Peter Parker; he accepted that 'with great power comes great responsibility'. In comparison our boy Rice bowl exercises great power with even greater irresponsibility. He wastes no time amassing himself a horde of cash through his rather dubious exploits and the world soon becomes an oyster. If not his oyster then it's certainly only a hop, skip and a jump away.

Jumpers have apparently been around for centuries (or so we're told) but there have also been those for as equally as long that have seen this gift of teleportation as a great abomination. A religious sect known as the Paladins have felt that it is only God who has the divine right to be everywhere at all times and throughout the course of history they have taken it onboard themselves to rid the world of the Jumpers. Cue a bleach haired Samuel L Jackson as a character known as Roland whose job it is to hunt down and kill them. The ridiculous stark white hair that he dons, sets off an almost cartoon like appearance against what is this hard drop character and it takes a fair while before you begin to take Samuel L Jackson seriously in this film. Nevertheless, once Roland has latched onto Rice bowl he soon begins to hunt him down in relentless fashion. This sets up a continuous cat and mouse chase between the two and the film then begins to move along at a very rapid pace.

Many of you will recall that Hayden Christensen also played the young Anakin Skywalker in the Star Wars prequels. It is fair to say that he played that character with a great degree of sobriety, much of which was attributable due to the nature of the role and the character in question. However, I wasn't expecting that he would continue with that style or approach in this role, where altogether a far more upbeat delivery was required. It's a shame to see that as a young actor he lacks the potential to be able to encompass further ranging and broader roles. Although in his defence none of his counterparts including the immensely experienced Samuel L Jackson put in fantastically great performances. It's still a disappointment that Hayden puts in such a wooden one.


If there is a character in the film that actually pulls it off and walks away with some form of accreditation then I would have to say that it's Griffin (Jamie Bell). Griffin is also a jumper but rather scattier minded and a little more highly strung than David Rice. Their paths cross purely by accident in a London pub where Griffin tags onto him to later form an alliance. Well, actually it's a partnership of sorts rather than a friendship being that it's not long before the two develop a mutual disdain of each other; familiarity of each others powers breeds contempt you see. It has to be said that Jamie Bell consistently steals the show from Hayden and pretty much upstages him whenever the two are simultaneously on the screen. He puts in an altogether more impressive performance.

The cliché of “the enemy of my enemy is my friend” rings true and with Roland and his Paladin sect out to get the both of them; the two jumpers have little choice but to hook up with each other in order to survive. The onscreen action is thick and fast and the special effects used in teleporting these guys around at blistering pace are also pretty impressive. Nothing is ridiculously over the top and there is enough throughout the movie to keep your attention and to keep you involved. In actual fact much of the technical delivery within the film is first rate. There is a high-speed car scene on the streets of Tokyo and being set at night with contrasting brightly lit neon lights all around it certainly brings the visuals to life. The high definition format paints a solid canvas and it all adds to a highly immersive experience.

Of course there is the usual filler material to pad out the action. David Rice has a childhood sweetheart by the name of Milli (Rachel Bilson). She knows little of his powers and simply thinks of him as being a cute but rather strange guy, from an early age. Anyway, he likes her and the feelings are reciprocated and the two of them eventually hook up. When the Paladins get involved she eventually gets drawn into all the problems that he finds himself in. The storyline also tries to highlight the relationship between David and his father but this generally falls flat, primarily as the father/son relationship is non-existent and is rather poorly developed. The interesting aspects of the story tend more towards his mother who had abandoned him at the tender age of 5. She remains a bit of a mystery character throughout the film and it's something that has rankled with David Rice ever since his early childhood. Towards the end of the film there is a twist that goes some way towards explaining things and the lead on blatantly suggests that there will quite likely be a sequel to this movie.

I must say that overall I did actually enjoy Jumper for the movie that it is but I feel I have to qualify that with many of its shortcomings. Whilst the movie certainly had the ingredients to become a spectacular sci-fi action flick it does actually fall disappointingly and frustratingly short of being one. The acting lacks depth of character, the pace of the movie is much induced by its short duration and the story continuously struggles in not going off waywardly at tangents.

The sequel, of which I am sure there will be one, would do well to give a sense of purpose to David Rice in either a) going all out to be a baddie or b) to become a superhero of sorts. The film definitely lacks a story with a sense of purpose and in the main that is the crux of all the problems.

So, I'm afraid there will be those that will be slightly underwhelmed by Jumper even though the movie does do just about enough to warrant a lookout for the sequel. The first one deserved far more and I'm sure second time around Jumper 2 will deliver. After all, the concept behind the movie remains sensationally great and the sooner we can teleport to Jumper 2 to put everything right, the better.