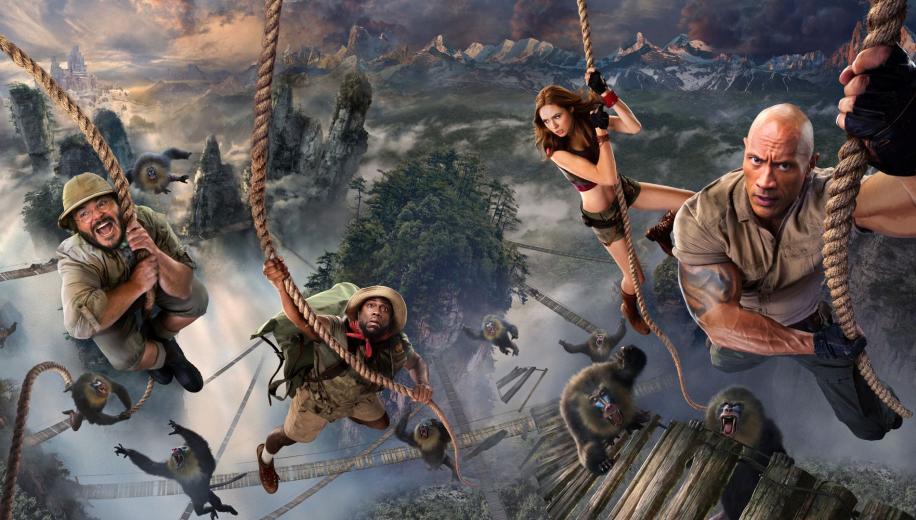 Jumanji: The Next Level Film Review

After the surprisingly hilarious and innovative Welcome to the Jungle, this sequel capitalises on its two Dannys - Glover and DeVito - for even more hilarity.

The body-swapping avatar-playing antics of Dwayne Johnson, Kevin Hart, Karen Gillan and Jack Black were superbly realised in the belated sequel/soft reboot to the beloved Robin William's original, allowing all four to play not only against type but against gender, enjoying the insanity of Johnson being neurotic and insecure, Gillan shy and self-conscious, Hart a jock-turned-short-ass, and Black drama-queening his way into oblivion.

2019's sequel could have merely injected the same teen characters back into - as subtitled - "The Next Level", but returning director Jake Kasdan (yes, son of Lawrence "Empire Strikes Back" Kasdan) takes up writing duties as well here, and turns in a surprisingly thoughtful attempt at cleverly doubling down on the body-swapping mayhem from last time, eschewing formula in favour of something with a little more heart, as well as ripe opportunity for the unlikeliest of actors (Johnson and Hart in particular) to revel in yet another side to their respective performance repertoires, largely thanks to the exquisitely splendid casting of the legends that are Danny DeVito and Danny Glover, who are spliced into a story about friendship, ageing and living your life, and give the "avatar cast" plenty of room to play different characters from last time around.

An entertaining, hilarious adventure that may not be as good as the original, but at least isn't the same thing repeated on a bigger scale.

The swapping is so well done that you almost wonder whether the actors who are being impersonated were asked to act through the script of the entire movie, and the people playing them then watched the videos on repeat to get the mannerisms and little tics just right. Even Black, who gets to go large this time around, is on fire, and the later addition of Crazy Rich Asians' Awkwafina is a genius move to spice up the second act - just around the time when audiences might be thinking that this is going to be a long two hours if they just keep going with the same jokes, the film finds a way to keep the surprises coming (hell, even the horse is a clever touch). And at the end of it all, when the gags have been depleted, there's a touching core about growing old which is certainly more than you'd expect from this kind of blockbuster, and a welcome bit of heartfelt depth.

Jumanji: The Next Level isn't going to be up for any awards, but, if you actually think about it, it actually requires a fair amount of versatility out of its lead cast, who rise to the challenge of mixing things up this time around (Face/Off-style), and deliver an entertaining, often even hilarious, and surprisingly heartfelt family adventure that may not be as good as the original, but at least isn't just the same thing repeated again on a bigger scale.

Jumanji: The Next Level 4K Video

Jumanji: The Next Level was shot digitally with a resolution of up to 3.4K, but ultimately - reportedly - only finished as a 2K DI, which has been used for this Ultra HD Blu-ray release. Thankfully, as we already know full well by now (and were recently reminded of with last month's Le Mans '66 presentation) decent upscales can still look staggeringly impressive and utterly indiscernible from full fat counterparts.

Detail is impressive throughout, noticeable as the two Danny's rumble around their house, with every day of their ages visible on their faces, whilst effects are pretty well entwined - notwithstanding the leeway afforded by the videogame style of the production. Of course the video game 'characters' are largely immaculate, but that kind of makes sense, with Johnson and Gillan in particular looking like the flawlessly toned fighters they are supposed to be.

Even without Dolby Vision, HDR is a defining feature, kicking this up a notch over its 1080p/SDR counterpart by some measure, and giving the palette some striking primary tones as well as, overall, a much richer, deeper feel that is further enhanced by the broader range of peak whites to inky blacks. It's a consistently very good, and frequently even excellent, 4K presentation.
﻿

Jumanji: The Next Level 4K Audio

The DTS:X track is absolutely everything you would possibly expect from this game-style  action-adventure blockbuster, bursting with intense set pieces, whilst delivering some strong and precise dynamics, also frequently courtesy of the effects (like the new life sound). As 3D High Definition object-based immersive audio goes, it's comfortably demo excellence.

Dialogue is afforded keen priority across the frontal array, allowing the various impersonations - which is what they basically are - to be enjoyed in all their nuanced glory, whilst effects take the grandstanding set pieces (from the Mad Max desert sequence to the insane monkey rope finale) to the next level, crafting an utterly immersive environment to engulf and absorb you throughout. LFE is not lacking, giving further resonance to the excellent track, and the score only gives the array more to do. Outstanding.
﻿

Jumanji: The Next Level 4K Extras

Although there's nothing on the 4K disc itself, the accompanying Blu-ray contains a smattering of Featurettes and a Gag Reel.

The biggest offering is a near-quarter-hour overview BTS Featurette, looking into expanding and besting the first film, with 9 much shorter 1-5 minute satellite pieces that look into the old and new cast, and the action sequences, with further visual effects breakdowns for a couple. The disc is rounded off by a Gag Reel.

Jumanji: The Next Level 4K Verdict

Jumanji: The Next Level isn't quite as much of a shock surprise gem as the first film, but deserves extras points for trying - and largely succeeding - to remain fresh mostly thanks to the two Dannys brought on board for the original cast to have immense fun impersonating.

Sony's UK 4K Ultra HD Blu-ray release affords excellent video and DTS:X IMAX-enhanced audio, as well as a few nice extras on the accompanying Blu-ray, making for a recommended purchase for fans of the first film.
﻿