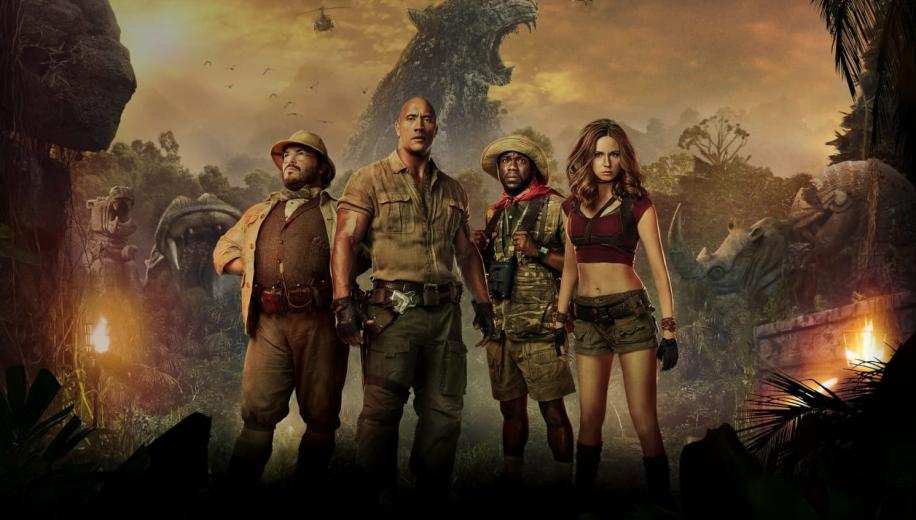 Dwayne Johnson delivers another fun over-the-top outing with this surprisingly witty and inventive reboot/sequel to the 1995 Robin Williams comedy Jumanji.

It's doubtful that anybody was particularly waiting around over two decades for a sequel to Jumanji, but audiences got one anyway, in the form of this pseudo-sequel / soft reboot which will likely be regarded by many as not just a whole lot of fun, but actually a better movie than the original. The story cleverly manages to pick up where the last one left off as well as jump forward to a relevant period for the modern generation, as the cursed Jumanji game secures a disparate quintet of Breakfast Club candidates on detention for various misdemeanours and dumps them in a new game - this time a video game - transported into new bodies (avatars) and set the impossible task of completing all the levels to make it back to the real world. Welcome to the Jungle's greatest gambit is doing a Face/Off and having the core group of actors (largely) play against type, as each one is inhabited by the mind of the teen that is 'playing' them.
The geeky outcast turns into Smoulder Bravestone (Dwayne Johnson), the shy outcast turns into Ruby Roundhouse (Karen Gillan), the jock turns into Mouse Finbar (Kevin Hart), and the prissy socialite turns into Shelly Oberon (Jack Black). Whilst the narrative is inventively structured like a game, complete with lives, levels and NPCs, and the action is surprisingly engaging, notwithstanding the constraints of the effects, it's the out-of-body experience that proves compelling, with Hart mostly enjoying being himself, but Johnson parodying himself whilst also playing an insecure teen, Gillan trying to pretend not to know how to flirt and Black stealing every damn scene he's in with the best performance he's given in years. The film itself is more The Mummy than Indiana Jones - but that's no bad thing as it's clearly not trying to be in the least bit pretentious, aiming to deliver self-aware entertainment of the highest order.

Digitally captured at a 3.4K resolution, the title is another all-too-common modern release limited by a 2K pipeline, with VFX rendered at this lower resolution, and the image ultimately limited by a 2K Digital Intermediate. The results are admittedly harder to distinguish from their Blu-ray counterpart, but that's perhaps more to do with the fact that the 1080p/AVC-encoded High Definition image already looks so impressive, rather than due to any inherent flaws in its 2160p sibling, which still manages to score a few points to remain the definitive way to enjoy the visuals of this energetic feature.


The definitive way to enjoy this energetic feature

Detail enjoys a modest uptick through the increased resolution, affording finer rendition of the hair, skin textures and clothing weaves, and allowing the gorgeous jungle to better come alive. The colour scheme also benefits from the tweaks afforded by WCG and HDR, giving added vibrancy to the jungle, producing deeper greens for the canopy, gorgeous blues for the sky, and some nice interjected primaries often courtesy of clothing choices. Browns are rich and suitably woody and blacks are solid, with no signs of crush, although that didn't come into play on the largely flawless Blu-ray either. Whilst there aren't any striking moments of primary pop or over-and-above distinction that leave this Ultra HD Blu-ray completely blowing its sibling out of the water, as aforementioned that speaks more to the overall quality of the Blu-ray than the lack of added punch for the Ultra HD Blu-ray, which ends up doing the best it can to improve upon the already demo standards established.

Jumanji: Welcome to the Jungle's Ultra HD Blu-ray release finds it easier to distinguish itself from its Blu-ray counterpart on the aural front, offering up immersive audio in the form of an object-based Dolby Atmos track founded upon an already impressive Dolby TrueHD 7.1 core, both clearly besting the DTS-HD Master Audio 5.1 track that is a solid enough alternative but will probably still come as disappointing for non-Ultra HD Blu-ray adopters with the knowledge that the Ultra HD Blu-ray disc affords better.


A great aural accompaniment and, like the video, definitive way to enjoy the movie

The track is a boisterous, fun affair, as perhaps you'd only expect from the bombastic film, thrumming along with inventive effects-driven intensity, an engaging score track that never affords the surrounds respite, and some solid action set-pieces to light up the array. There's plenty of LFE oomph, and some decent directionality, particularly when things get all Mad Max: Fury Road and the bikers roar across the stage. Despite all the chaos, dialogue is key, and the spoken word gets pride of place on the track, afforded clarity and coherence throughout as it takes front stage where necessary. It's a great aural accompaniment and, like the video, the definitive way to enjoy the movie.

Maintaining another bad habit for Ultra HD Blu-ray releases, Sony doesn't bother porting over any of the extras from the accompanying Blu-ray disc, leaving you to flip over after watching the film.


The extras maintain the self-aware tone of the film itself

The extras aren't exactly overwhelming in terms of either quantity or quality, but they maintain the tongue-in-cheek self-aware tone of the film itself, with a series of Featurettes decreasing in length, headlined by a quarter hour Making-Of, supported by smaller offerings looking at the cast, the effects, the stunts and the Jumanji legacy. Perhaps the best addition, aside from a fun Gag Reel, is the excellent mock Music Video, Jumanji, Jumanji, with Jack Black and Nick Jonas. A strong contender for that rare sequel that bests the original

Jumanji: Welcome to the Jungle is, in some ways, arguably a strong contender for that rare sequel that bests - or at least innovatively develops the ideas of - the original, going full-tilt with a great body-swapping premise and securing some fantastic performances from a throughly game cast.

The Ultra HD Blu-ray release affords the engaging comedy action-adventure great video and superb audio, as well as a few nice, in-character extras to round out the package. It comes recommended.