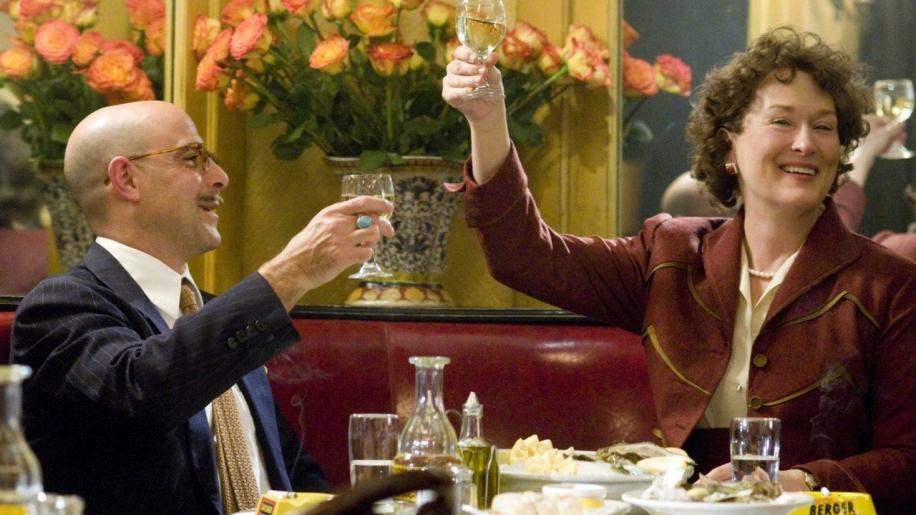 A film with two women's names in the title may be off putting to a male audience, but to miss out on 'Julie & Julia' on Blu-ray would be to pass up a visual feast as well as some gourmet acting from a cast that includes Meryl Streep (Out of Africa), Amy Adams (Enchanted) and Stanley Tucci (ER). I was told by a friend that he felt this movie was a bit too girlie for him although he hadn't seen it, but then those of us who are secure in our own sexuality have no problem in overcoming such prejudice. There aren't many movies these days that I'd say were lit like an oil painting, but 'Julie & Julia' most definitely looks absolutely gorgeous. Watching it, I felt immersed in totally satisfying quality that brought on a feeling of well being and happiness. The controlled range of shades, the colour design of each shot and the overall look is just so pleasing to the eye.
Director of Photography Stephen Goldblatt knows his onions - and probably a few carrots too.

The premise of the film, scripted & directed by Nora Ephron (Sleepless in Seattle) and based on the best seller by Julie Powell, is the intertwining of two stories which both parallel and contrast each other in equal measure.
We have the tale of Julia Child (Meryl Streep), relatively unknown in the UK but famous in the colonies as a writer of the book 'Mastering the Art of French Cooking' as well as presenter of the American TV show 'The French Chef'.
She and her husband Paul (Stanley Tucci) move to Paris, where he is a member of the American Embassy staff. To fend off boredom she resolves to learn to cook and enrols in 'Le Cordon Bleu' school of French cuisine. She is eventually asked to join a couple of friends who are writing a book on French cuisine for Americans (Ya want fries with that?). This is a more biographical tale compared to the story of Julie Powell (Amy Adams), who is working in a thankless job, post 9/11 trying to help relatives of victims of the Twin Towers disaster.
To give her life some focus she decides to cook her way through Julia Child's book, testing each recipe in turn. The book has around 500 recipes and she decides to allot herself the timescale of one year to achieve it. She records her findings, problems, successes and failures in a Blog which has a growing number of readers.
The film cuts back and forth almost seamlessly between the two timelines, allowing us to get to know the characters in each and to feel for them as life writes upon their page. We see Julia Child with her expensive Parisienne home, her stylish clothes and her circle of well heeled friends. Despite all this, she and her husband are childless. This contrasts with the home life of Julie Powell, living with her husband in a rented flat in New York's Queens district above a Pizzeria and working on her cookery Blog in her spare time. We see that they both have targets to achieve. Julia has to leap over hurdles to get her first book published, while Julie struggles to keep to her year long deadline to complete the recipes for her Blog - and she desperately wants to be recognised as a writer too.

There is one character that I haven't mentioned yet - and that is Food with a capital 'F'. As Julie cooks the recipes from Julia's book, from Boeuf Bourguignon to boning a duck I became aware that I was becoming increasingly hungry as it all looked so good - and making food look good on film is an art in itself. Usually a food stylist is hired for this very purpose and I can report that they earned their wages here as I went on a foraging mission to the fridge but found nothing comparable to the on screen repast.


I felt that Meryl Streep's performance as Julia was somewhat over the top (wash my mouth out with soap) as she played her as almost an extrovert eccentric. Now, I've always been impressed by Ms Streep's acting ability in the past, so I watched some clips of Julia Child on YouTube. She nailed her character precisely, right down to the sudden head movements and Parrot like voice- just as you'd expect.


Amy Adams, who I'd most recently seen as Amelia Earhart in 'Night at the Museum 2' and previously in 'Enchanted', proved that those two films just didn't give her the chance to prove what a consummate actress she really is. It must have been a daunting task to appear alongside an artiste of Ms Streep's calibre - although never in the same shot - yet Ms Adams acquits herself admirably. You feel you are watching not one, but two top class players.

Stanley Tucci comes across well as the strong, generally quiet Paul and you get a great understanding of the love he has for his wife. They have a strong relationship and you can see that he's very proud of his wife's efforts to learn to excel in the kitchen and to get her book published. They seem so comfortable together that it's hard to believe the two actors are not married in real life. It's called acting, Dahlings!


'Julie & Julia' is a thoroughly enjoyable film due to the charming script, the excellent acting, the beautiful photography, the delicious looking food and above all the warmth that is exuded by the whole production.
Nora Ephron has given us 'un bon repas' here for our delectation and I would be greatly saddened to think that anyone would let their macho image get in the way of the enjoyment of such a well constructed menu.
It's not very often that I would wholeheartedly recommend a film, but on this occasion I'm happy to do so.
As Julia Child would have said, “Bon Appetit!”