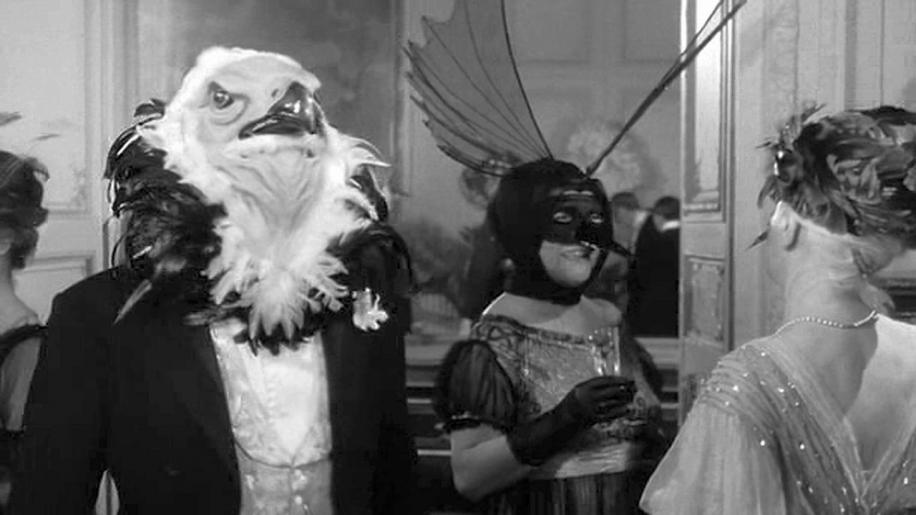 Quickly becoming Britains answer to the brilliant Criterion series, Eureka Videos Masters Of Cinema series is producing films by the van load - most of them available on DVD for the first time and the majority of interest to fans of world or historical cinema.

The latest in the MOC series is a double header from French director Georges Franju. The first film in the set is the 1963 offering Judex,a remake of a 1916 film with the same title. Judex stars real life magician Channing Pollock as the mysterious masked vigilante Judex. The do-gooder has been writing threatening letters to an evil banker who has squashed a lot of people and businesses in his pursuit to become rich. In his last letter, Judex threaten the banker with death at midnight the following day - at his daughters engagement party.

Sure enough, that night, the banker passes away. But not before proposing marriage to his housekeeper - who refuses. On hearing of his death, the housekeeper and her evil accomplice raid the bankers' office and find evidence that he has been making his fortune illegally and try to bribe the bankers' daughter. However, the daughter has given all of the money away that was left to her in the will as she was aware of how it was come by and didn't want the dirty money on her conscience. Judex vows to protect the daughter, who has been kidnapped by the housekeeper and a chase ensues across the rooftops.

The hardest thing I've found in writing this review is not to give away the plot - however, in doing so I've had to miss out the integral part of the story - but I'm sure you'll forgive me for that...

Made in 1963 but set in what appears to the turn of the twentieth century, Judex is a complicated affair and pretty hard going. However, it's well worth sitting through because the end product is an interesting film that pays homage to the surreal silent serial-works of Louis Feuillade., who made the original Judex.

Made in black and white, the film appears to be caught in some sort of time warp. Obviously more than a brief nod has been given to the original 1916 movie by setting the film in that period - however, some of the costumes are most definitely set in the 1960's with lots of women wandering around in catsuits and pointed bras of the time.

At first, it all adds to the confusion - but once you've watched the film once, all becomes clear that this a movie is about a clash between good and evil. Though I'll admit it did take me a while to work out who was good and who was evil...but it all becomes clear in the end.

The second offering from Franju in this set is Nuits Rouges (Red Nights - aka Shadowman).

Lip service is paid to this particular movie in the literature that accompanies the set and the case - and it's easy to see why. To be honest, it's not very good.

Jacques Champreux who is Louis Feuillades grandson scripted both films in the set. Because of this, Champreux tries to produce Nuites Rouges in the same style as Judex - but fails miserably.

To simplify the plot, it's a hunt for the treasure of the Knights Templar. Thrown in for good measure is a man who wears a red rag around his face (played by Champreux himself) who controls a Doctor. This Doctor has come up with a way of killing the human brain but keeping the host alive - the re-programming that brain in any way that the man with the red rag wants. And of course, he wants them programmed to kill - for some reason...

It really is terrible stuff that just seems to jump from one set piece to another without actually stringing the story together. The actors' bimble around the set completely devoid of direction and cause and the subtitled script (which was newly done for this release) is a bit of a joke in itself.

It does contain some of Franju's trademarks though - namely shapely women walking around in catsuits and strange sound effects that seem so out of place. For example, one of the characters is walking through a small French town at the beginning of the film to go and tell somebody about the map to the treasure. The streets are empty - but in the background, as clear as day, you can hear children playing. Not just one or two - a whole playground full of them. Yet there's not a child in sight...I can only assume that the Foley artists got in on the act of thinking that the whole film was actually a joke - which it is.

However, saying that, Eureka have once again pulled out all the stops to bring us the best possible package given the material available. It's beautifully packaged and comes complete with a sixty page booklet which is brilliantly illustrated and contains interviews with the director and cast.

Every bed of roses produces at least one thorn and I'm afraid that in Nuites Rouges, Eureka have found that thorn.

I can recommend this package for the movie Judex, which is the main feature anyway. It may not be to everybody's liking, and it took me two viewings to fully get to grips with it - but the second time I watched it, I was hooked. With newly translated subtitles and a new print (more in the picture section), lovers of foreign cinema will lap this up and should click buy now.