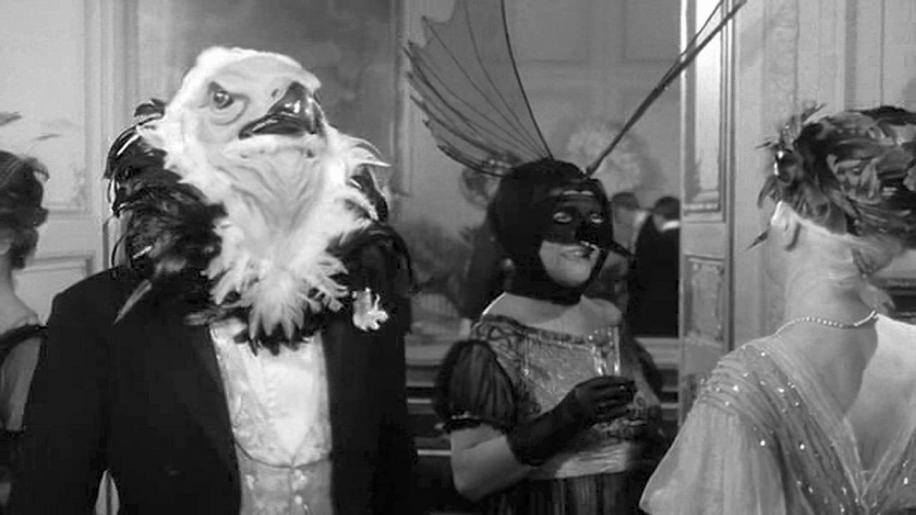 Meticulously restored before being committed to disc, both films look amazing. I'll cover the main feature, Judex first.
Presented in its original aspect ratio of 1.66:1, the source material for this film has undergone some serious re-constructive surgery. The entire 94 minutes are free from tears and marks and the picture is very stable the whole way through.

Filmed in black and white, there's not too much I can say about the picture quality itself. Blacks are black and whites are white and there millions of shades in between. Black and white levels on the disc are solid and neither colour is crushed.

A lot of the film is set at night and the shadow detail remains throughout - nothing appears to disappear off screen.

On the Eureka disc Vampyr that has been released on the same day as this one, the restorers chose to leave some of the damage on the print to retain it's authenticity. Not so Judex. Squeaky-clean is the order of the day here. However, it appears that some DNR has been applied to remove any grain that may have been present. This gives the effect of actually watching a 1960's TV programme rather than a film - but doesn't detract too much from your enjoyment.


Nuites Rouges was made in 1973 and is presented in it's original 1.66:1 aspect ratio. The source material has again gone through some brilliant restoration work and is sparkling clean and free from any dirt and marks.

The colours are rich and bold and reds and oranges in particular are oversaturated which seems to be the style of the day.

Flesh tones are accurate and vibrant whilst the red rags that are worn around the heads of some of the actors shine like big red lollipops. It all adds to the lunacy of the piece to be honest and brings the film a bit of character that is sadly lacking in the script.

Black levels are deep and inky though not too much of the film is set at night.

All in all, not a bad effort at all. As both films are presented with their original mono soundtracks, albeit with a Dolby Digital makeover, I think it's safe to comment on them together rather than split them into two sections.


First thing you will notice is that dialogue on both films is clear and concise. However, unless you speak fluent French, that won't affect you too much. If you are lucky enough to speak it, there is an option in both menus to watch the films with the subtitles off. For those of us that need the aid of the written word, both sets of subs have been newly updated for these discs. They keep up with the action onscreen very well and are easy to read.

I did hear one anomaly on the soundtrack for Judex. There is a fair amount of background noise and hiss. This comes and goes throughout the film and is there more often than not. There were one or two occasions when it did actually take over the soundstage and distract me from what was going on. Nuites Rouges suffers from no such nasties though. The extras package is pretty bare bones for a MOC release to be honest and I was a little disappointed.

The forty-page booklet that seems to accompany all releases in this series is a welcome extra but doesn't take the place of live action featurettes. But, as always it's brilliantly put together and highly informative.


I wish I could say the same for the interview with Franju collaborator and grandson of Louis Feuillade, Jacques Champreux. The interview contained on the Judex disc is the better of two as he pays homage to his grandfathers' work (without any clips...) and compares the two. I'm afraid to say that I got bored very quickly with the interview on Nuites Rouges and switched off...

Both interviews are in their native French language with subtitles. When the powers that be here at AVForums reviews offer up Eureka discs for review, I'll never turn them down - no matter what film is contained within. I had never heard of either of the films in this package before but am glad for the opportunity to broaden my film knowledge and watch a film that I would otherwise would not even have given a second glance on the shelf in the video store.

As a package, I can see the thinking behind Eurekas decision to package the lesser-known Nuites Rouges with Judex. The former would have problems standing on it's own as it's a pretty poor film. But, packaged alongside the far better Judex, the viewer has the opportunity to own two films from the same director and can compare the two.

Both films have been restored very well so there are no complaints in the picture department from me. The sound is basic Dolby Digital mono on both platters and hold up well - though there is a lot of hiss on the Judex disc.


Accompanied by a nice forty-page booklet and a couple of interviews, I know that collectors of this series will purchase this set so that there isn't a gap on their shelf - these ar number 49 and 50 in the set. I urge all lovers of world cinema to at least try and rent a copy of this just to watch Judex. I could personally leave Nuites Rouges but look at is as a freebie and you won't go far wrong.