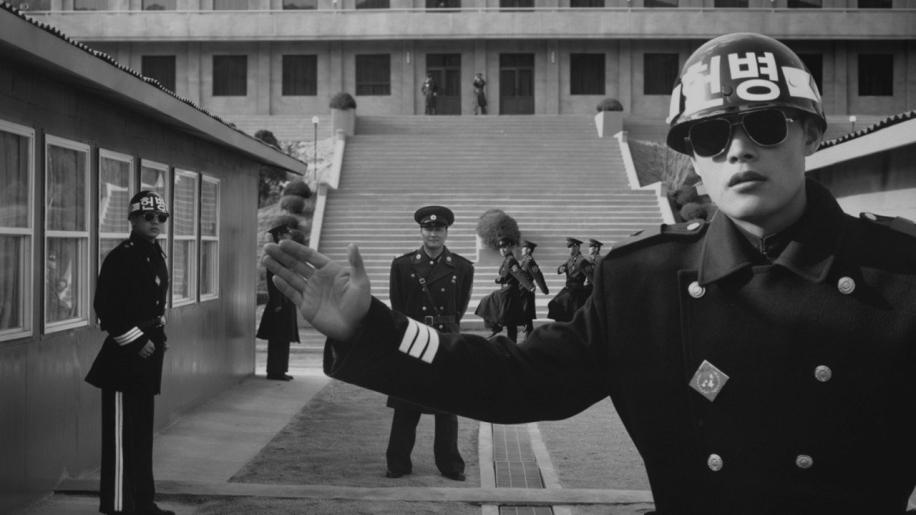 Some people love war movies to be as real as possible, holding Spielberg's Saving Private Ryan as the epitome of historic recreation. Personally, I am not so sure if this is the case. Ryan has always seemed to me, to be a rather contrived work that used the war's undoubted emotional backdrop to lend credence to a piece of entertainment. Of course, the impact is far greater if you do recreate war scenarios on the big screen but, in doing so, sometimes lessens those depicted events to cinematic frippery. So there is the rub: Do you rely on the reality of war to embellish your vision, or do you approach things from another angle?

The latter would appear to be the choice for director Chan-wook Park (Oddboy), with his movie Joint Security Area (JSA). Set in the near future on the North/South Korean border, a shooting sparks a fierce crossfire and draws the two nations to the brink of war. With two North Korean soldiers dead, and one South Korean injured, it is left to inexperienced Maj Sophie (Yeong-ae Lee) to find out the truth of what happened and placate the opposing factions.

JSA looks at the relationships and differences of the “opposing” cultures and asks questions of the purpose of war. After a deliberately disorientating introduction, we are rapidly introduced to all the players in this movie. Now this is a shame as the good actors - the four Korean soldiers - contrast harshly against the poor ones - the Swiss and Swedish enforcement officers. Actually, poor really doesn't do them justice. Hideously, chronically bromidic may be a better description. Just as well then that the efforts to discover what happened, the bits where the Swiss/Swedish tag team generally “act”, is something of a McGuffin. Equally just as well, the actual interactions of the soldiers are fabulously engrossing.

I suppose that the scene that sticks in my mind, when breaking down the friendships between the North/South Korean soldiers, is the landmine scene. It is certainly a key turning point and is handled with emotion and panache, without becoming unduly false. Indeed the scene plays like a microcosm of JSA as a whole: ironically bridging the uneasy standoff between the two cultures by using a tool of the armed forces through which governments perpetrate the standoff in the first place. Such symbolism is used liberally throughout JSA from the outright funny to lines that cut like a razor to the truth of Korean honour. A simple scene where Sgt. Oh Kyeong-pil (Kang-ho Song) eats an American “choco-pie” from the south is particularly poignant. Sgt. Lee Soo-hyeok (Byung-hun Lee) says “Why don't you come over to the south, you can have all you could want?” of his North Korean choco-pie lover. A deathly silence falls as Sgt. Oh spits out the half eaten morsel into his hand and replies “My dream is for the Korean people to unite and make the best damn choco-pies in the whole world!” before stuffing his snack back into his mouth. The point is made and everyone understands the complex relationships in the room with a minimum of fuss.

Chan-wook Park, whether by intent or not, appears to be a very western orientated director; The pacing, structure and acting in JSA all seem to be at odds with some of the other Asian output that I have seen, being a slower less exaggerated movie than some others. There are scenes of such pure barren symmetry I can just imaging Kubrick nodding in approval from his heavenly respite. However, there is enough sensibility impartiality in Park's diction that makes you believe in the Korean situation. For example, I can imagine nine out of ten American directors using the aforementioned choco-pie scene as a sickening, cloyingly nationalistic speech ala Independence Day. Not so with Park, who tempers opposing styles in JSA very well. Indeed the final scene is a very powerful one indeed, and is worthy if accolade in and of itself.

JSA is far from perfect. The whodunit sections of the story seem to be wholly unnecessary after a certain point, irritating on a number of levels. Firstly Yeong-ae Lee's English accent is either learnt from someone in deepest South Africa or is badly dubbed in ADR. Additionally, you really have to hear the woeful acting of Herbert Ulrich (Capt Pearson) he escorts Maj Sophie across the neutral bridge. I would also say that some of the scenes are a little out of focus and need more clarity, while others are simply too long. I would also question some of the actions towards the end to be less than realistic considering what has gone before in the soldier's lives.

If and this is a big IF, you can ignore the schism between competing story threads, there is much to commend here. If not then you will most certainly think this a sorely missed opportunity.