Journey to the Center of the Earth Movie Review 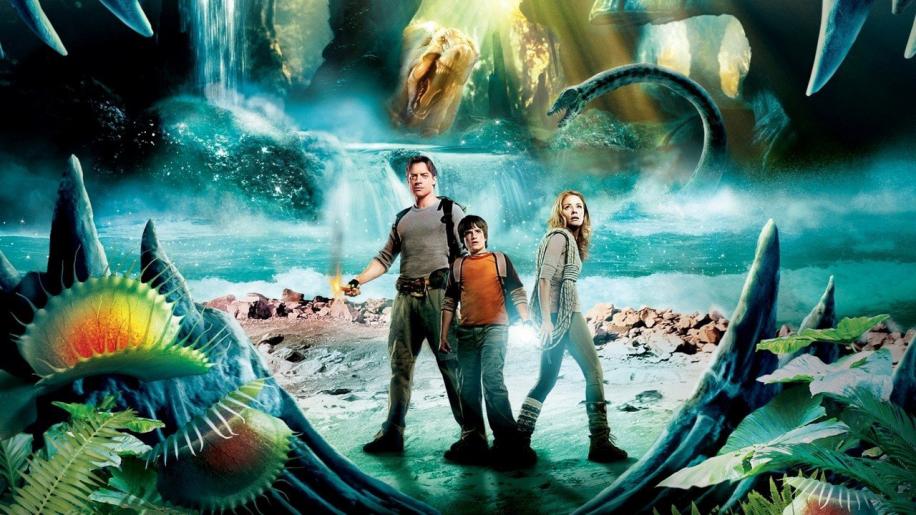 Journey to the Center of the Earth Movie (2013)

I originally reviewed Journey to the Center of the Earth back in the summer, when it was released into cinemas. Back then, it was going directly up against some serious box office giants, and now in the autumn it is trying to steal their thunder by releasing a few weeks earlier. The first, limited edition, pressing comes in 3D and 2D - subsequent versions will be 2d only. The American copy, reviewed here, comes with four pairs of glasses, enabling the whole family to sit down together. The UK release comes with only two pairs. What follows is my opinion on the film written after visiting the cinema.


This, to be honest, was not one of the most promising films of the summer. In a season that is giving us The Dark Knight and Prince Caspian for adventure, and Wall-E or Kung Fu Panda for child friendly fare it is difficult to know exactly where Journey to the Center of the Earth will fit in. However, the distributers seemed to have enough confidence in their product to go up against the summer behemoths and this intrigued me enough to take the plunge and visit the cinema.


Journey to the Centre of the Earth is co-produced by star Brendon Fraser, and is loosely based around Jules Verne's novel of the same name. Failed scientist Trevor Anderson (Fraser) has been teaching Earth Science at the local University, on a program that his brother Max set up. Max had placed geographic monitoring equipment at several key places around the globe, but never returned from his trip. Trevor is doing his best to keep things running in his absence.


Max had a son, Sean (Josh Hutcherson) - a thirteen year old who has never really got to know his Uncle. Of course, at the start of the film, Sean is dropped off by his mother in order to spend some “quality time” with his uncle. Sean brings with him a box of his father's possession, and amongst the detritus of a life, lays a copy of the titular novel. When they open the book, they discover it is heavily annotated, and that the earth monitors that Max erected are placed in key locations from the book. This leads them on a quest to Iceland, where they meet scientist Hannah (Anita Briem) who agrees to take them up a mountain to examine one of Max's devices.


Once up there, though, they get caught in a violent electrical storm and take refuge in an abandoned mine. When a rock fall traps them, they decide to find a way out, but only succeed in finding their way to the very center of the earth. When they realise that everything that they are seeing is in the book, they also understand that people have been here before, and escaped......


Reading those last few paragraphs back to myself, this really does sound like the most clichéd movie plot summary that you can imagine - and yes, the film certainly is. It does nothing that hasn't been seen a million times before, and takes no risk - never straying from formula. It is also one of the most intense action films that I have seen in a long time. It is absolutely relentless, and once they hit the mountain about twenty minutes in, the action just never stops. By all rational yardsticks, this film should be awful.


Yet, it isn't. It is a thoroughly enjoyable, rip-roaring 90 minutes of entertainment. The first reason for this is the actors. Fraser has this kind of action hero down to a tee - fit and athletic, but slightly goofy and prone to mistakes. The character he portrays here is a slightly different version of Rick O'Connell. But he plays this kind of role so well that it just seems to fit the film like a glove. He also seems to have a real empathy with Josh Hutcherson who plays Sean. This young actor is a revelation in his role, bringing a real sense of growth to his character. Without spoiling the plot too much, there is a surprisingly moving key scene about half way through the movie, and the two actors combine to really get the audience feeling the emotion.


Whilst Fraser shows empathy with Hutcherson, he also shows real chemistry with Anita Briem. Briem is an Icelandic actress, and she manages to prevent this film becoming the Brendon Fraser show, sparking off him all the way through, showing tenderness and action credentials when she is required. This acting triumvirate really go a long way to pulling the film above its pulpy roots.


Much has also been made of the bad special effects as seen in the trailer, but in the film itself, the effects are generally excellent. True, there are some shockingly bad bits (Fraser being chased by a T Rex is one such moment) but the environments that they find themselves in are really eerie and otherworldly. I am imagining that the environments created must be entirely CGI, but if so they are some of the most effective CGI I have yet seen, trumping 300 in places. The underground sea that they have to cross is a creation so realistic that you feel that you can dive in, and the tree house set (I am trying not to spoiler) is also an amazing creation.


Another saving grace for the film is its refusal to take itself too seriously. There is a great gag with Fraser hanging on the end of the rope after an abseil goes wrong, and a knowing line running through the script with the two leads counting just how many times each saves the other. First time movie director Eric Brevig (he did direct one episode of Xena, Warrior Princess) comes from an ILM visual effects background, and could quite easily have let the effects take over the picture, but he always shows an assured touch with character, knowing when to let the effects take a back seat to performance.


It has to be said that Journey to the Center of the Earth is not a classic of movie making, and has some flaws in the special effects. But at the end of the day, it has no pretensions at being anything other than a good old fashioned family blockbuster film - and in this it succeeds. It may well get swallowed up amongst the other films busting blocks this summer, but it deserves to find an audience as it is far better than you may imagine.