The minds behind Flower return with an unmissable co-operative adventure. 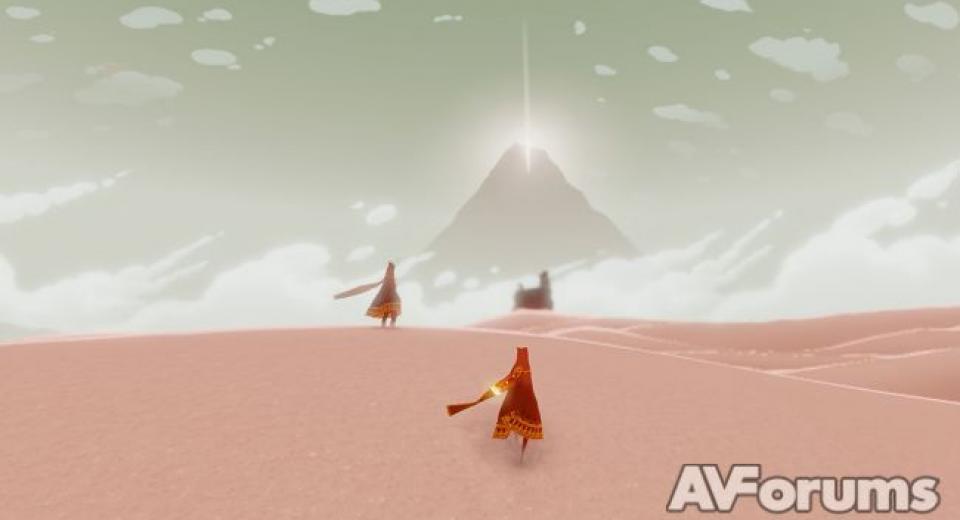 The unnamed, robed character I’ve been steadily guiding across the desert approaches a staircase that runs along the outside wall of what appears to be a partially-sunken building.

Despite having no discernible feet, (s)he nimbly trots up the first few steps before jumping onto the roof. Looking around, there’s little to see except sand. All there is to obstruct the view of the horizon is the glowing mountain I’ve been vaguely heading towards.

Just then another player joins me. His/her character is identical to mine: a pair of eyes peering out of an otherwise featureless face, cloaked, wearing a scarf that flutters in the breeze.

Only two of the controller’s buttons are assigned to actions of note: X for jump, and circle to call out. The longer you press circle for, the louder and more dramatically your character yells.

I tap it twice. The other player’s character reciprocates. We stand close for a moment, an act which effectively charges our ability to jump, before my new friend chirrups three times and leaps onto the ground. I follow soon after and we sand-surf onwards towards the distant mountain.

We saw most of the two hour adventure through together, my companion and I. Or at least, I thought we did... but I was wrong. As the game drew to a close, I was informed I’d actually been partnered with eight different people. Players drop in and out of each others’ games so seamlessly it’s almost unnoticeable. For all the virtues of Journey, and there are many, it’s the implementation of online multiplayer that will stay with me the longest. You are only joined by one other person at any time but who they are is a mystery. You play in parallel; it’s neither fully co-operative nor adversarial. There are no puzzles that require two players to complete, and you can’t make life difficult for each other either. You’re both just there.

'Liking' a stranger in a multiplayer game usually means admiring their playing ability. What Journey does that’s amazing is positively influence how you view the people you meet beyond how they play. You find yourself liking them, although you have no idea who they are.

By limiting so severely the ways you can interact with each other, thatgamecompany (TGC) have somehow teased out whatever it is that makes strangers feel a genuine warmth for one another. At the end, the PSN names of those you’ve played with are displayed and I imagine many a friend request will be sent, despite there being almost no chance that the same two people will ever meet in-game again. It’s difficult to talk in too much detail about what you’ll see along the way. There’s little that can be classed as a plot spoiler, but environmental spoilers would detract quite significantly from the experience. Suffice it to say the world does have more to it than endless sand, there are some light puzzles, and towards the end, a number of thrilling moments that can perhaps best be described by that awful film classification phrase ‘mild peril’.

For the most part Jouney is a strictly linear affair, but it never feels that way. A good deal of care has been taken to use the environment, and occasionally the camera, to guide you in the direction you need to go. I didn’t find myself lost or confused once.

The ‘guided camera’ moments may irritate some players, but I think they should be taken in the spirit the developers intended. If the camera takes it upon itself to point at something in Journey, it’s usually something worth seeing. There’s a sequence in which the camera rotates and pans out to show your character in profile moving swiftly against one of the most stunning backdrops I’ve ever seen in a game. Again, I don’t want to say too much, but it’s one of the reasons why I’ll be going back and playing Journey again.

There will be as many interpretations of Journey’s meaning as there are players who finish it. That’s not to suggest Journey is revolutionary in a narrative sense: for example, it adheres to the convention of breaking up ‘levels’ with cutscenes. But that’s not important because TGC's deft implementation of all Journey’s mechanics disguises those tropes almost entirely, resulting in a game that feels sublimely natural to play. In addition, the music and sound effects are as complementary to the gameplay as you'd expect from TGC. I’m sure that Journey will reignite the ‘games as art’ debate, the most tedious and inward-looking nonsense in all of gaming criticism, and I’m also sure it’ll be described more often than not as ‘an experience’ and showered with hyperbole. Here’s the thing: Portal is an experience, Mass Effect is an experience... and Kane and Lynch 2 is an experience as well. It's an empty word. But it’s difficult to resist using language that suggests games like Journey somehow transcend the medium. Nothing transcends the medium; rather, experimental games like Journey expand it, and we should be grateful for that.

For me, Journey inspired a sense of wonder that threw me back to the first time I played Shadow of the Colossus. The feeling of smallness in such an expansive world is played off neatly against the unpredictable appearance of human companions. By yourself you’ll feel a genuine tug of loneliness, as I did as I approached those steps on that building in the sand, but within minutes you’ll be bounding down a dune towards a mountain, thoroughly enjoying (and truly grateful for) the company of a complete stranger.

And any game that can make me like complete strangers on PSN must be very special indeed.

thatgamecompany, developer of FlOw and Flower, return with Journey, a unique online co-operative adventure. With only the simplest controls, an unchallenging difficulty level and a duration of less than two hours, Journey might sound lightweight but it's quite the opposite. The bonds you'll form with the strangers you meet will be a source of wonder and surprise, and the world is as enthralling as it is beautiful. A must try for any self-respecting PS3 owner.