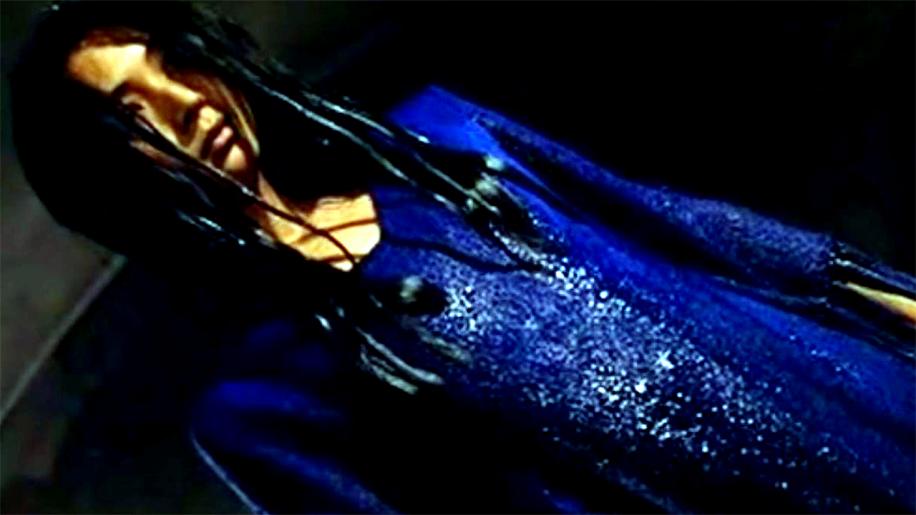 If you ever wondered where Mr Tarantino gets some of his ideas for say Kill Bill or his recent critically acclaimed but ill fated Grindhouse project then you need to go back a few years. Back to the era of drive ins, double features and the genre of exploitation cinema. In the early seventies director Shunya Ito dipped his toes into this often overlooked cinematic gem. He began with a revenge trilogy, Sasori based on manga work by Toru Shinohara; here we look at the third in that trilogy Joshuu sasori: Kemono-beya or for us mere mortals more commonly known as Female Prisoner #701 Scorpion: Beast Stable.

The prisoner in question is Nami Matsushima (Kaji Meiko), currently an escapee. She's on the run from the authorities. Evading capture by hacking off the arm of a policeman who handcuffs her, she flees into the city. Hiding out in what appears to be a cemetery, and now chewing on the hacked off arm, a local prostitute, Yuki (Yayoi Watanabe) looks upon her favourably and offers her sanctuary in her home in the local shanty town district. It transpires that Yuki is also caring for her severely mentally disadvantaged brother. Her brother has an insatiable appetite for sex and Yuki willingly submits to his advances.

Once Yuki is out working however her brother turns his attention to Nami. Obviously not knowing her skill as a fighter he attempts to drag her away, only stopping when Nami defends herself. Nami leaves, finds herself a small dingy one roomed apartment and manages to keep down a job as a seamstress. Ultimately though she's brought back into the thick of the action by the local organised gang, or Yakuza. Humiliated and seeing the lives of others torn apart by these ruthless criminals, she has no choice - revenge is on her mind.

As mentioned earlier Scorpion: Beast Stable is the final instalment of Shunya Ito's Scorpion trilogy, all concerning the prison exploits of Nami Matsushima and her repeated attempts at escape. Although the last in this series, and I have unfortunately not seen the others, it stands proudly as a feature which can be watched independently. Kaji Meiko is superbly cast as the role of the haunted, ill fated prisoner. An early period in her career she subsequently went onto star in the more commonly known Lady Snowblood franchise.

Scorpion: Beast Stable itself though is a prime example of the exploitation cinema kicking around in the early 70s and the Japanese gleefully jumped onto this sex and gore-fest bandwagon. It's cinema that's cheap. Acting is never top of the list, production values are very low and the script will keep you on your toes for its sheer ludicrous nature or the tangents, which they all too often go off on. Scorpion: Beast Stable certainly has production issues, the acting and script though is beautifully put together with directorial and filming style. In typical exploitation fashion it's always the women who are at the mercy of all those around them. Her gang masters, the sorry men who abuse her body and ultimately her own brother exploit Yuki. Another prostitute is exploited by the same gang members and forced to have an abortion in a scene which will make your blood curdle. Again in fine form there's usually always a saviour and this is the role that Nami takes on board. Vengeful angel, she fights for the downtrodden.

It's easy to see where so many ideas have come from these humble beginnings. Tarantino has never been shy about the movies he uses as material and in Scorpion: Beast Stable we can certainly see where he was going with Kill Bill, the music if nothing else plainly gives it away. Of course he has continued his journey with both himself and Robert Rodriguez releasing Grindhouse. A pity then that the viewing public never really 'got it' and the studios decided to split the original into its component parts - Planet Terror and Death Proof. Also we can see Park Chan-wook obviously nodding appreciation to this set with his own revenge trilogy in the early 2000s.

Just because Scorpion: Beast Stable has low production values doesn't for one moment imply that this has low ideas. The editing and filming style will keep you on the edge of your seat, suitably magnifying the emotions on display at the time. Direction is flawless. The story races along never once giving the viewer the time to pause for breath or retrospection. Acting is wonderfully sublime concentrating on facial actions, rarely are words used; certainly they are never wasted.

Often dreamy, definitely always brutal and raw Scorpion: Beast Stable and its like must be seen if you are to appreciate some of the work of current day directors. If nothing else then the woman at the head of the Yakuza gang often looks like Ming the Merciless in drag, and that's surely worth a watch. Recommended.