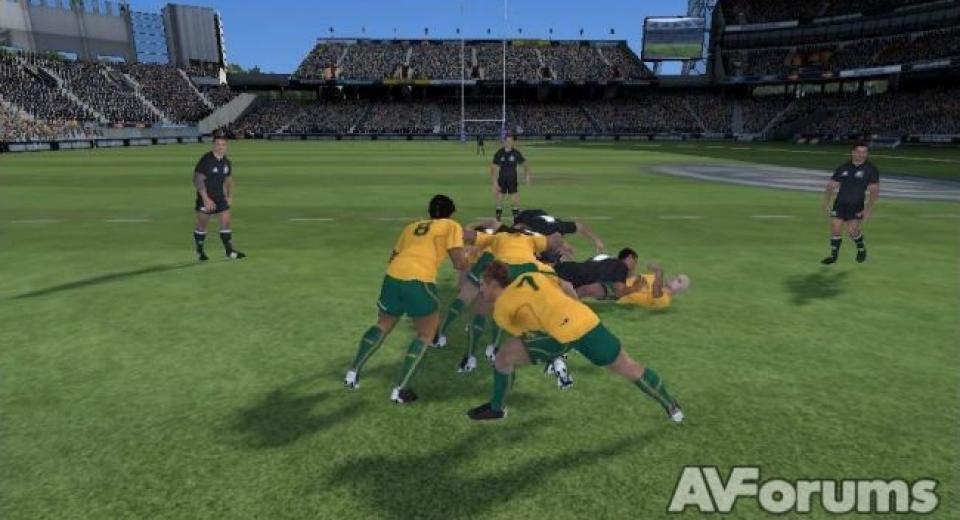 Licenced sports games are an unpredictable lot, the quality of the name attached doesn’t necessarily equate to the quality of the title; Steven Gerrard’s looming frame on a box can’t cure Pure Football’s poorness, and it isn’t Tiger Woods’ presence that makes EA’s golf games so good.  They get you noticed though, and in the world of Rugby games, having the behemoth of Jonah Lomu behind your punt at glory is a sound idea.

This port of a game already accredited as arguably the best rugby release on the current gen (though pedants will note the scarce competition) is thankfully seeing its transition to the Vita being handled by the original developers, Sidhe.  The slightly sketchy visuals hold up far better on the small screen (though aliasing, particularly on the posts is always pretty apparent), and that isn’t the end of the portable success.

Much remains the same, it’s a sports title that aims for a degree of fluidity but doesn’t seem intent on delivering it at the expense of offering all the options available on the rugby pitch.  The New Zealand based developers clearly know the sport and where it needs tailoring to fit a console experience. The market is probably not there to make this a blockbuster, there’s no big advertising push or press fanfare for this one.  Even those fairly apathetic to the sport (and its PS3/Xbox 360 release last year) will find the move to the smaller screen and touch controls proves largely successful.  Pickings are slim on the Vita anyway - give it a chance and you may just be surprised.

Difficulty wise, this is a pretty forgiving title, the medium setting will be enough to get the basics and if you become adept at them don’t be surprised if you want to ratchet up the settings.  Have a few blasts playing as the Lomu All Stars vs Spain (those boys aren’t as proficient without a round ball) and your confidence will rise quickly.  You can also choose how many of the rules you want to put into play, if you’re after a short blast turning off knock-ons for example can be a bit of fun.  If at any point you’re having trouble, just revert to the tutorials, which are some of the better examples available, offering short, easy-to-digest videos highlighting when button presses are to be executed.

Like other, higher profile sports titles, passing and tackling underpin the core mechanics.  You use the shoulder buttons for the former (L/R to pass left/right) and it is quick and responsive, but you soon realise that just as with other sports titles, your position and body shape have a great influence on the outcome of predicted passes.  Get yourself into too tight a position and the motion will be hampered, stray too far off line or jink into oncoming traffic and your team-mates may not be able to adjust with you in time to receive properly and the move will break down. Longer passes become important, spraying the ball wider into space or picking out a specific team-mate better positioned for the inevitable ruck or maul.  In these situations Sidhe have given you a fair degree of control rather than leaving it up to chance, the position of your team to help out, and most importantly your choice of how to “bind” all have an effect.  You can go with a quick bind that gets players in sharpish, but is more easily broken, or you can go for a strong bind which increases your chances of possession but the players involved will be slower to depart the mound of bodies, thus leaving you short-handed.

If you find yourself short on bodies to pass to or your line leaves you little room to manoeuvre you may find pinging it back to the fly half (holding both shoulder buttons sends the ball deep) is your best bet, for a kick up field or a shot at a drop goal.

The myriad kicks, all mapped to the face buttons, bring further options, neglect them at your peril as they are key to unlocking the trickier teams.  They are far more than a last resort for a punt up field to relieve pressure, drop goals and grubber kicks are extremely pleasing to pull off, Sidhe have got the pressure needed to gain power just about right and thanks to the temporary slight slow-motion effect during the kicking process, with a bit of practice its easy to become reasonably proficient.

Scrums again emphasise the developer’s want to make the outcome skill based, obviously favouring the team putting in; it’s a simple case of lining up a couple of markers on a circle as they rotate in order to gain the momentum.

Once the ball is free and you find the chance to run there are a few tricks up your sleeve.  The right thumbstick controls your ability to sidestep (a standard side-to-side waggle), hold off your opponent with a pre-emptive outstretched arm (push forward) and even the fairly ordinary act of sprinting feels a bit like a trick given it’s executed with the use of the rear touch-pad.  The touch capabilities of the Vita are also in use during line-outs and conversions, where a finger swipe is used for aiming.  These all add up to a deep, but easily engaging game that flows nicely, replicating a sport that can become stop-start. In terms of modes within which to try out your skills, there’s competition, career and competitive online 1 vs 1; the human opponents will obviously be better placed to counter-act your tactics as the AI still isn’t the best (hence the need to ramp up the difficulty if you start to get proficient) but once you scratch beneath the surface of the single-player options you’ll find there’s a fair degree of difference in the various sides you come up against.  Add in the “rugby dollars” you’ll earn for wins, which can then be used to purchase unlockables, and you’ve got good longevity.

There is definitely depth in Jonah Lomu Rugby Challenge, but it is never to the detriment of welcoming new players into the fold.  The rough edges of animation and sound design (commentary is stitched together, and the seams are very noticeable) are less apparent in a portable package.  The lack of a proper licence for Six Nations is not a significant hurdle as there is a wealth of club and international sides to face in competition.

If you’ve been put off by rugby sims before, this may well change your mind. There are no excessively gimmicky touch-screen controls to hinder a flowing sports title, Sidhe have just ported their likeable formula with a mere dash of finger-swiping innovation.  Loading times can hang a little, which is not great for a portable title, but the ability to tailor rules, combined with a comparatively gentle difficulty curve makes the game an otherwise suitable fit for a bus-ride friendly device.