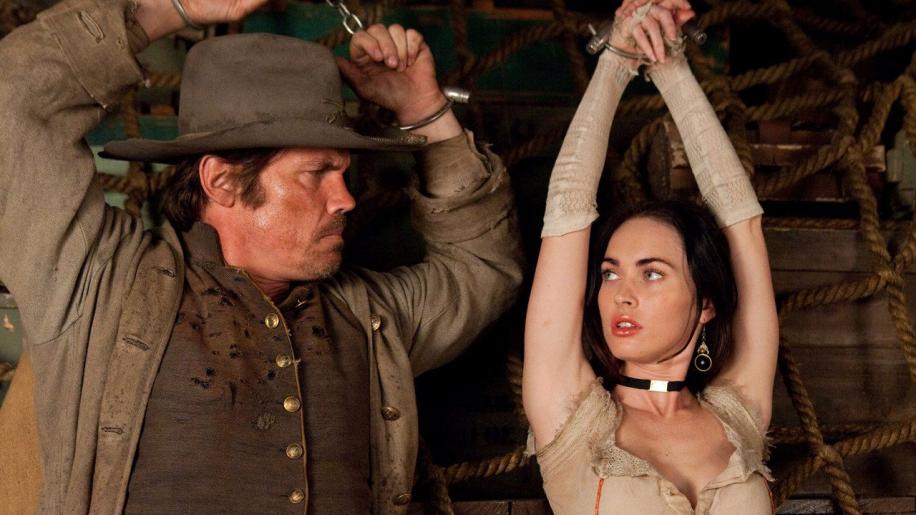 We’ve had a fair few comic book adaptations in recent years, but as with any transference of medium they can vary wildly in quality, from the stellar (Christopher Nolan’s Batman films) and the artistically faithful (Sin City) to the downright indefensible (Constantine). So along comes Jonah Hex, another adaptation from the DC stable of lucrative franchises. Less well known than the spandex clad heroes of more colourful graphic novels, Hex errs very much on the darker side of the comics spectrum. That however has not always stopped those adapting the source material from giving their titular characters a fresher, more mainstream appeal, as was the case with Ghost Rider and Constantine. Figures that should, by rights, be enigmatic antiheros somehow go through the Hollywood wash and are rinsed of all their complexity, neuroses and malevolence, re-emerging on the other side as merely troubled good guys. Well we can firmly put Hex into this category, but for once this is not entirely against the original material’s tone.

Originally planned as a one hour television feature, Producer Akiva Goldsman remained involved through its limbo stage and came out the other side with new co-producers attached, a genuine leading man in the shape of Josh Brolin and a fresh script from Mark Neveldine and Brian Taylor, the duo responsible for co-writing and co-directing Crank (2006) and Gamer (2009). The character first appeared in the second volume of the American Western comic series All Star Western back in 1972. Such was the success of the character that he continued to appear until he was deemed big enough to warrant his own series of comics, entitled unsurprisingly Jonah Hex which went on to run for a not too shabby 92 issues. Since then the character has gone back and forth, appearing in a new title Hex where he was shifted to a more post apocalyptic 21st century setting, as well as more recent offerings, most notably the excellent 2005- series by Justin Gray and Jimmy Palmiotti. A few things have changed along the way, but the essence of the character remains the same. He is a disfigured bounty hunter travelling the West, killing all those who cross him but adhering to his own moral code of not harming the innocent. As a mainstream film this last part of his code doesn’t leave much wiggle room for a true anti-hero, but I suppose that was always to be expected, the key is how ruthless they have been willing to portray him and whether they are leaning more towards the visceral violence of more modern takes on the character.

With Hex being a traditional hero/antihero character and being rooted firmly in reality, he lacks not only the flashier superhero powers but also their decidedly flamboyant arch enemies. The one notable figure from the comics that enters the fray here is that of General Quentin Turnbull, played by John Malkovich. The story is set up in an alarmingly hasty manner, cobbled together with all the grace of a “previously on…” pre-opening credits sequence of the average TV cop series. The condensed version tells us that Hex was a soldier for the South during the American Civil War who, for some reason that isn’t explained here (though it is fleshed out in the comics), suddenly disavows himself of his Confederate ways and due to this his men are captured, his best friend lies dead by his hands, and he himself is branded a traitor. It would have been nice for first time director Jimmy Hayward to give us something tangible to hang onto at this point, but he eschews such simplicity as explaining the key plot points in favour of slow motion shots of horses galloping through the dusty plains and an overly manful voice-over with such gems as “Folks can believe what they like, but eventually a man’s gotta decide if he’s gonna do what’s right…..that choice cost me more than I bargained for”. This was never likely to be a work of great subtlety, but it becomes clear immensely quickly that stylisation is the order of the day here, as comic book imagery takes over from the live action to tell the back story of the main character. In short, General Turnbull didn’t take kindly to what he sees as Hex’s betrayal of his Confederate troops that led to Hex killing his best friend, who also happened to be the General’s son Jeb, so decides to teach him a lesson, and a particularly grisly one at that. Turnbull has him tied to a cross whilst his son and wife are left to perish as they are burned down with their house. The coup de grace is Turnbull’s insistence upon leaving Hex alive, but branding him across his cheek with a QT mark in order that he lives in constant anguish, knowing what it signifies every time he has to look at it.

So with a brutal opening, fans will likely be hoping that there is a suitably dark atmosphere around the rest of the film. No sooner is the scene established then we are whisked away to be shown what a mean customer Hex has become, as he drags the bodies of three men behind his horse into a flea-bitten backwater to collect his bounty. Once the pleasantries of the talking are out of the way, the bullets fly and all that is left is Hex and some more corpses to bury, one of which is a Sheriff. This helps establish him as a man capable of anything, undaunted by title or mantle but merely focused on cutting down those who cross him and sticking to his code. This brief but bombastic altercation also helps put the film firmly into an otherworldly, decidedly steam-punk, realm that becomes strangely reminiscent of Wild Wild West. He uses not six-shooters to cut down his enemies but two horse mounted gatling guns that were somehow erstwhile concealed. Realism may be out the window, but that has never stopped a decent Western before. The true weirdness though is not yet revealed, for after Hex’s terrible injuries he was at death’s door, whereupon he was rescued by a tribe of Crow Native Americans. Due to his wounds he was too far gone, and although he now walks amongst the living he has seen enough of the other side to now be able to communicate with the dead. A neat twist that should give the film a supernatural flavour, but unfortunately it is used in the most basic manner possible.

With Hex roaming the West now a wanted man for his slaying of a lawman, his lust for vengeance has been denied him as we learn Turnbull died in a hotel fire some years before…or did he? Short answer, no he didn’t and if you think I’m blunt in saying so, believe me the film takes as little care in pointing viewers in that direction. The renegade General has taken the forming of the United States badly and has spent his time busily attacking civilian targets, earning him the nickname “el terrorista”. Don’t worry though, if you were thinking this meant things would turn into another thinly veiled diatribe about modern day terrorism, think again, or perhaps don’t bother thinking about it at all, as the scriptwriters clearly haven’t. Malkovich does his best as a despotic madman hellbent on destroying the peace of a country he has come to despise via a super weapon which he is in the process of assembling, but it is a role he could have performed in his sleep. Brolin is admirable in his fight against the B-movie status of proceedings, being vaguely reminiscent of Bruce Campbell at times in his ability to be at once in on the joke and outside it. Perhaps it should be applauded that one of the most photogenic actors around should want to take a part where he is shown to be disfigured. The make-up lacks the punch of some more grisly artistic versions of the character’s visage as seen in the comics as there is no way they could make an entire cheek disappear (told via flashback he cut away the brand left by Turnbull with a heated axe) and sadly the one enlarged eyeball isn’t even attempted. The line of melted flesh that runs down the side of his mouth leads to an almost Brando-esque parody of mumbling at times and never gives the desired shock value of the original material, though is a sound effort at uglifying Brolin and staying true to the material.

Michael Fassbender (Hunger) is arguably the most eye catching figure, playing a cheerful tattooed killer in Turnbull’s gang, he seems to make his role larger than it actually is with his bonhomie approach to dispatching the innocent with a smile. Megan Fox appears in a pretty throwaway role as a sassy hooker and ally of Hex, being neither blessed with a decent story of her own nor given anything genuinely interesting to do. This is formulaic to the Nth degree and unfortunately even the action sequences, which by rights should have saved such pulp fare as this, are let down by a distinct lack of imagination. When about to shoot your arch enemy halfway through the film, say something and give him half a second to escape or for someone to sneak up on you. Put in a female character that gets taken hostage. When locked up, don’t fall back on clever twists, just have a character suddenly inform you of their extraordinary lock picking skills. When a villain has the upper hand, don’t show them unemotionally despatching the hero, make them toy with him in order to give him half a dozen chances to escape or get the upper hand. The final get out of gaol card is when Hex is seemingly mortally wounded, he is once again brought back to life by Crows through a process of general chanting, a few herbs put on wounds and bizarrely vomiting up a Crow. Even the fact of Hex fighting for the South is explained in a painfully obvious “he’s not racist though” side conversation. At no point does the script or Hayward’s direction take a stand against the obvious route or an inventive turn. There are a few decent explosions and the aforementioned horse mounted gun scene is fairly ripping fun but other than that this is derivative and uninspiring. What should have been a darkly iconic comic book adaptation has been made into a poorly scripted and pedestrian mainstream movie that shows the kind of lack of craft and “that’ll do” approach that comics aficionados are likely all too familiar with. It may not be as unfaithful to the source material as such adaptations as Constantine, but there is little more credit one can throw its way.