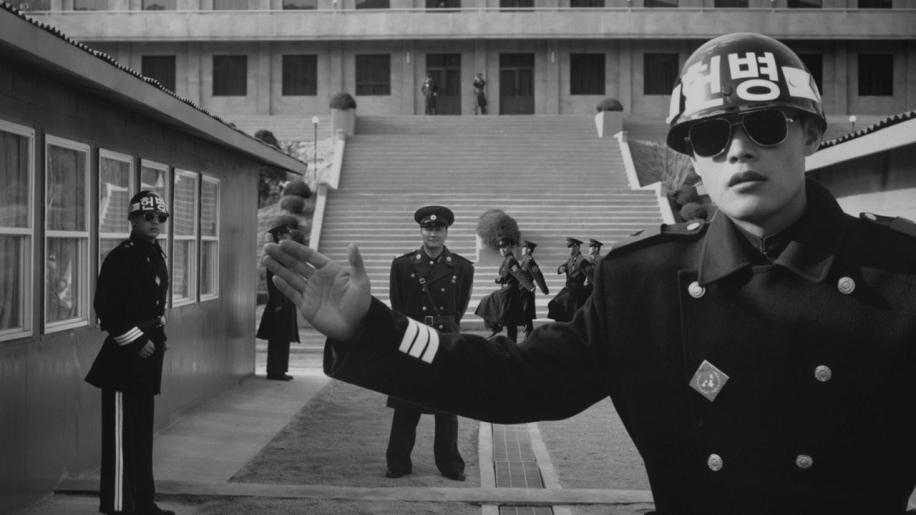 At first I thought the picture was okay, before I realised my new DVD player mucks around with picture settings on the fly to give you the closest picture to a reference set of parameters. After turning this off, I realised two things. One, the DVD player was doing a fantastic job. That leaves the other thing to be JSA's picture is actually very poor indeed in places. In fact, it looks like JSA was mastered from VHS in some parts. A furry, overly bright, blurred picture in some outdoor scenes, especially when some tourists are taken through the barracks of XXX just shouldn't happen in this, the summer of DVD technology. There is some ghosting of detail, especially in the cornfields which, admittedly, are a very tough DVD task. Even so, there should be less overtly intrusive artifacting. Still some of the darker scenes are well contrasted, if lacking in ultimate detail. Yet at other times the picture is perfectly good and very watchable.

Fairly mundane. There is a DTS track, here which is okay as is the DD one. It seems to be a copout to say that there wasn't much to like or dislike in the sound stakes, but that is exactly the case, here. I could say that there was a certain amount of hiss, but not too much to intrude. There was some reasonable use of rears during a rainy scene at the beginning and some reasonable bass effects in a cornfield burning sequence. Otherwise, it's just okay, average, nothing to write home about.

The making of feature is split into several options: The ISA Story, Behind the Scenes and Making the Movie. All of them are very exhaustive, and just as good as the best of the breed. The initial part is done as an actor/director talk and seems to be natural in a funnelled kind of way. Even so the relevant information is gathered and some surprises along the way. For example, the cornfield scene was done in CGI which I would never have guessed unless the documentary hadn't told me so. Also some of the disorientation mentioned above is actually intentional. Whether the soldiers are crossing north or south of that bridge which spans the neutral zone is supposed to be vague. The amount of detail and effort that has gone into these three extras is pretty laudable and makes for a very engrossing documentary. This is especially true when the issue of the North/South divide is raised, primarily because you get an insight into the movie makers' preconceptions. Certainly I got the impression that this vision, while changed, never lost its focus within the final product

Letter from a Private is a little too poetic for my liking being a musical interlude set against some scenes from JSA. If this is your thing, the nso be it, but to me it was a little too self reverent.

Profile clips are the only time outside of Shaun of the Dead where the Biographies have been watchable. Facts about the character are played against some outtakes from JSA. This is a very palatable way of digesting what is a very dry extra indeed.

Not perfection, but enjoyable nonetheless. This is a movie that is crippled by one half of the storyline but shines because of the other. If you are the kind of person that can clear their minds of the worst parts of a movie and concentrate on the good (like Keanu Reaves' accent in Dracula) then you will think JSA a triumph. To me, and probably most others, JSA is a movie that misses the mark on too many occasions to forgive.