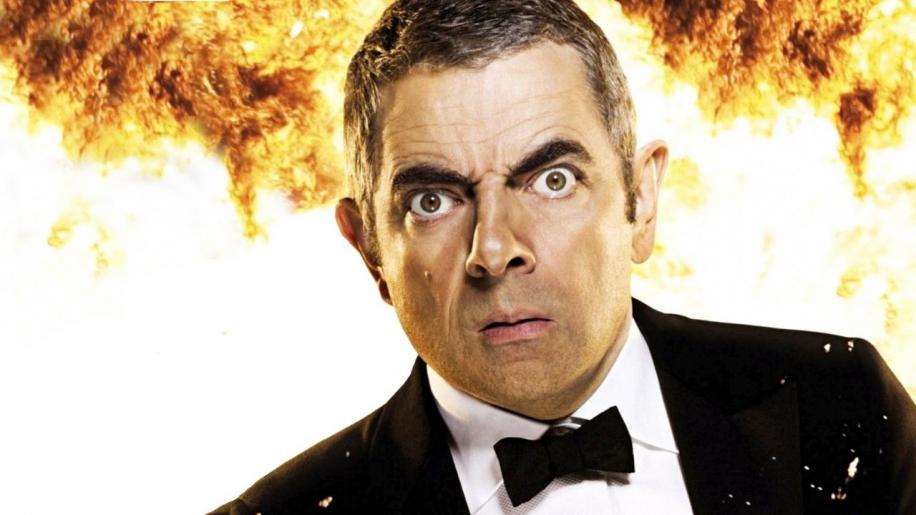 Rowan Atkinson makes his second cinematic appearance as the bumbling British Secret Agent in ‘Johnny English Reborn’, now out on UK Region free Blu-ray. I’d enjoyed his first outing ‘Johnny English’ back in 2003 and always hoped there would be a sequel.

Rowan Atkinson has great comic timing and the ability to deliver a performance as someone trying desperately to be suave and sophisticated, yet constantly undermined by circumstances and his own ineptitude. His mastery of physical humour is second to none and his rubberised features simply add to any sight gag. The opportunities for comedy in a spy spoof are immense, although it’s hard to come up with something new as the genre has really been Austin Powered to death. I felt that there was still life in the old dog yet as I settled down to watch the movie.

So where has top British Agent English been since we last saw him? We’re immediately acquainted with the fact that he’s spent the last few years in a Tibetan monastery learning focus, attentiveness, and martial arts as well as developing the ability to withstand a good kick in the family jewels. He’s been retired from MI-7, following a disastrous mission in Mozambique, the mere mention of which still causes an involuntary twitching of his right eye.

He is summoned back to MI-7 to liaise with an informant who will speak only to him and here he uncovers a plot to assassinate the Chinese Premier, sending him on a globe-trotting mission to uncover the truth behind a terrorist organisation known as `Vortex'. His sidekick from the previous movie, Bough, is replaced by young Agent Tucker (Daniel Kaluuya) this time round and he’s heavily into the politically correct way of doing things as well as observing Health & Safety rules. The Head of MI-7, Pegasus, is played by none other than Gillian Anderson who tolerates English while being aghast at his propensity for failure.

As English arrives back at MI-7 Headquarters we’re treated to probably the best gag in the movie as we see that the Intelligence Service is sponsored by Toshiba, with the tag line ‘Spying for You’. On his trip through the ‘Toy cupboard’ he meets Patch Quartermain (Tim McInerny), the gadget master who has lost various limbs through personally trying out the experimental weapons. The love interest is supplied by the coolly beautiful Rosamund Pike as Kate Sumner, the ‘company’ behavioural psychologist, and Dominic West turns up as Simon Ambrose, the smooth talking spy English would most like to be.

Every Agent needs a fab car, so English has a 9 Litre V16 powered Rolls voiced by Mariella Frostrup. The car was provided by Rolls Royce with a real V16 engine for the movie, much to the excitement of petrol head Mr Atkinson, although it’s woefully underused in the final cut of the picture.

Okay, so we’ve got a great cast and possibilities that make you rub your hands together in anticipation. I love spy movies and I also enjoy movies that send them up, but this one sadly only made me smile two or three times in its 101 minutes running time (although it seemed longer). I really wanted to be able to say that I’d enjoyed it too.

The film makes good references to other movies, like the base jumping sequence in ‘Casino Royale’ and attempts to take liberal swipes at the Bourne series. A running gag has a Chinese assassin popping up several times with a gadget ridden golf bag and vacuum cleaner (AKA the Cleaner Killer). Naturally, English mistakes a succession of little old ladies for her – leading to the ‘here we go again’ feeling.

There’s not so much a car chase as a wheelchair chase through the streets of London, which despite the effort that went into its shooting, didn’t cause much mirth. While trying to break into a building with the long suffering Agent Tucker, English displays his knowledge of the secret weapons arsenal by setting off an ‘Agent locator’ complete with siren and flares. It would probably help to be slightly inebriated while watching ‘Johnny English Reborn’ as this would offset the feeling of being ‘wound up’ by his antics.

One routine that worked well was the sequence where English nonchalantly attempts to ignore his malfunctioning raising and lowering chair at a meeting with the British PM. I was so glad to find something that raised a smile.

Directed by Oliver Parker, ‘Johnny English Reborn’ struggles to be a good comedy. The intention is there but it seems that the scriptwriter, Hamish McColl, and the director just couldn’t get it to work. This is one of the few movies I have found where the deleted scenes (in the Extras) are funnier than the content of the feature itself.