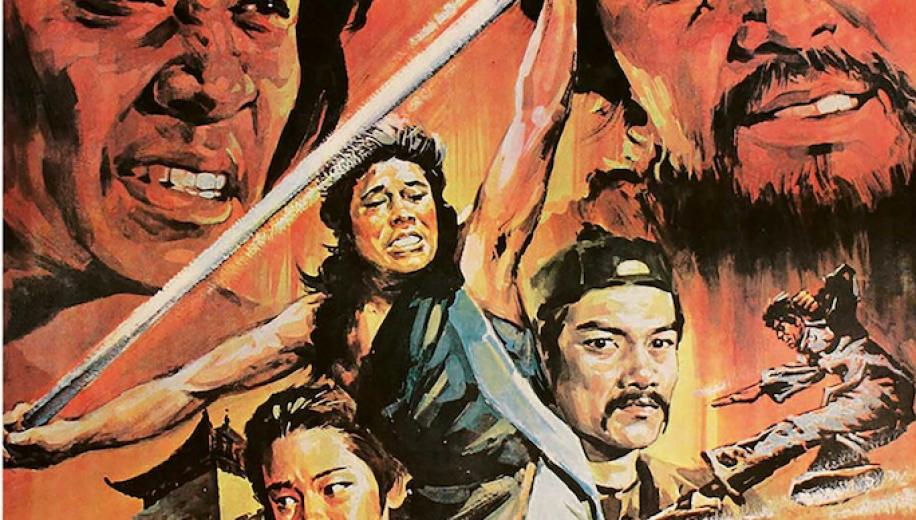 After his directorial debut The Young Dragons was delayed from release due to violent content, Woo became attached to Golden Harvest Studios, delivering a love story rendition of the Cantonese opera, Princess Chang Ping and then returning to martial arts action for 1976's Hand of Death.

The story has a powerful warrior - who uses the iron claw technique - and his clan travelling the land wiping out Shaolin temples and all the students within. The temple monks send their best student who ultimately finds himself outmatched, and only escapes with the help of a spear-wielding blacksmith. The two team up with a disgraced swordsman, and a few other loyal followers, to take down the villainous warrior and his motley crew of henchmen but, first, they must find a way to get to him.

Woo's Hand of Death is packed with superbly choreographed action, lessened by the budget and annoyingly over the top sound effects, but pleasantly bloody, particularly in the final act, where the bodies on both sides just keep dropping. The filmmaker clearly has a fabulous handle on framing action, whilst co-star Sammo Hung (given comedy teeth and made lead henchman) choreographs the fighting exquisitely (many of the final fight moves are repeated blow-for-blow in Mission: Impossible II). There are frequent displays of multiple different martial arts techniques combined into one grand fight scene, and Woo manages it well, employing his since-trademarked slo-mo style surprisingly sparingly in this early entry.

Despite the action quota, the performances are fairly simple, with the villain going for quite literal moustache-twirling, whilst Doran Tan - nicknamed 'Flash Legs' in the industry - is great in the fight sequences but a bit of a charisma vacuum otherwise, playing it on autopilot and unfortunately tasked with carrying the movie when he's a little too bland for it (and perhaps a part of that is the character he's been lumbered with playing). Jackie Chan and Sammo Hung enjoy the early era martial arts fun; Chan in a rare, serious, role, clearly starting off as he meant to go on in his career by being seriously injured on set - and indeed knocked unconscious - during a stunt sequence, whilst Woo racks up a big body count in anticipation of the gun-play antics which would eventually become his forte.

Although it's the older of the two Woo releases in this set, and occasionally slightly softer, Hand of Death still boasts some impressive detail in the close-ups, taking in the period garb and absolutely revelling in the vibrant tones afforded by both those costumes and the gorgeous lush green setting. There are several scenes - most notably within the fortress itself - which are ripe with almost comic book visuals, despite often feeling very organic and natural; the greenery is stunning, and the outfits rich as hell. There's no doubt that this 43 year old movie has never looked better than this; a clean, clear and largely excellent remaster which lives up to Eureka's typically high standard.

As with its companion-piece, there are a whole host of audio tracks to choose from, affording multiple language options, and all lossless. The default is a Mandarin Stereo track, but there are also Mandarin Mono, Cantonese Stereo, English Stereo dub and English 'classic' Mono dub options. As noted on Last Hurrah for Chivalry, you're unlikely to find an option that perfectly matches the lips as there are multiple languages used within the film, but the English dub is only useful for pure comedy entertainment purposes.


Undoubtedly the best presentation the film has ever enjoyed

Dialogue remains well-prioritised throughout the piece, whilst the score - which is initially surprisingly Bond-ian in its John Barry-esque themes - was done by Joseph Too, who went on to do Woo's Better Tomorrow movies, and comes across as a dominant component for the proceedings, even if it tends to falter a bit in the middle and overextend its themes. Effects are quintessentially 70s martial arts in style, which really lets down the darker and more violent edge that Woo exhibits during many of the fight scenes, happily wounding and killing plenty of his core players, but let down by the annoying sound effects that dominate the action. Overall, Eureka has done another great job by having this many sound options alone, and it's undoubtedly the best presentation the film has ever enjoyed.

Although not quite packed with extra features, consideration must be paid to the fact that Hand of Death is part of a two pack and so that basically doubles the extras package and makes it typically comprehensive for Eureka.

Both are headlined by an informative and enthusiastic Audio Commentary from martial arts cinema 'authority' Mike Leeder, there's also an Archival Interview with Director John Woo, as well as a Trailer.

Woo's Hand of Death is packed with superbly choreographed action

John Woo's Hand of Death makes its Blu-ray debut in a 2-pack with John Woo's similar-era Last Hurrah for Chivalry, both delivered with largely stunning 2K-remastered video, a great selection of audio tracks and a strong selection of extra features including two Audio Commentaries and Interviews with John Woo. Presaging the director's heroic bloodshed golden era of action filmmaking, fans of Woo's oeuvre should consider this worth checking out and, fingers-crossed, it bodes well for them releasing some of his later, early classics on the format.