"If you want peace, prepare for war." 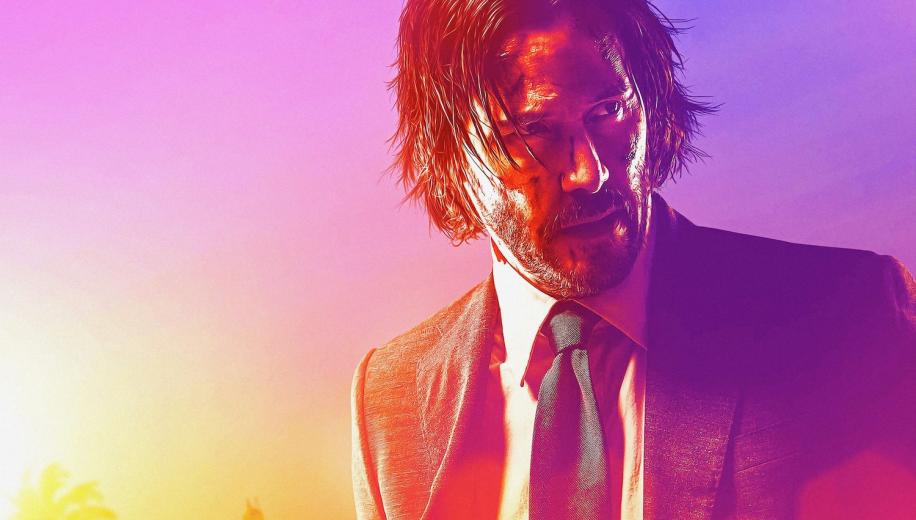 Keanu Reeves returns to what will hopefully now be his defining role, delivering an inventive, expansive, ballistic ballet of death in this tremendous third entry in the action franchise.

The tale of Reeves' mission to draw his stunt team from the Matrix franchise into the limelight by way of a relatively low budget action flick will one day be the stuff of indie moviemaking legend. The emphasis on expert martial arts choreography, masterful gun-fu, and colourful comic book world-building above all else somehow sparked long-forgotten interest in the genre, tapping the same vein as The Raid, and catapulting a $20 Million dollar movie into the big leagues, seeing a sequel delivering double the returns and fuelling the interest in a wider franchise and maybe even a spin-off TV series.

And whilst Reeves is still standing, he's clearly prepared to be front and centre in the thick of it all, going above and beyond to deliver yet another exquisite action epic which reminds genre fans that there's very little else out there that can possibly compete.


On paper, this is every action movie you've ever seen condensed into one collection of greatest hits fight scenes

The story picks up immediately after the end of Chapter Two - which may be obvious given the somewhat cliffhanger ending of the last instalment, but still rewards those sensible enough to consider revisiting the last two films before picking this up. Reeves' titular master assassin is on the run, with precious little time to escape New York as the hordes of killers descend upon him to seek the unprecedented bounty sitting on his head. The High Table wants blood, sending an Adjudicator (Asia Kate Dillon) who determines that not only must Mr Wick pay for breaking the rules, but also all those who helped him, casting a spotlight on a number of friends and allies and employing another master assassin (Mark Dacascos - Brotherhood of the Wolf) to punish them all.

As well as the Manager of the Continental, Winston (Ian McShane), his trusty Concierge (Lance Reddick), and the Underground Bowery King (Lawrence Fishburne), Wick involves old acquaintances like The Director (Anjelica Huston) and fellow assassin turned Manager Halle Berry in his messy quest for closure.

In terms of memorable action epics, it just doesn't get any better than this franchise. The movies have issues with mildly inconsistent motivations (the entire plot to the second movie could have easily been abbreviated had he just killed the guy after his house got blown up), the creators expanding their beautifully crafted sandbox in new and inventive ways, but not without the occasional cost of continuity (what the hell is Winston's game?), and perhaps even tonal imbalance (Dacascos is a stunning martial artist, but comedy doesn't sit well with the master assassin guise).

Yet it probably doesn't really matter; this is a movie franchise which has turned itself into the ultimate action comic book come to life, making its name with mysterious characters that have titles rather than names, who speak only in threats; peddling ninja kevlar-wearing attack dogs, who only go for the groin; seeing foot chases turn into horse chases turn into bike-versus-horse chases, and, before we know it, bike versus bike with samurai swords chases. Flaws really go out the window when faced with the iconic image of John Wick on a horse.

Hell, the trilogy probably leaves director Chad Stahelski the veritable long-shot one-take Scorsese of action movies, going wild in his final act setting just because... well, Bruce Lee: Game of Death. On paper, this is every action movie you've ever seen condensed into one collection of greatest hits fight scenes. If you like action, it's awesomeness personified.


Parabellum can't really be compared to anything other than its own ilk. And as action movies go, it doesn't really get any better than John Wick

The world-building, flawed as it may be, is therefore only an added bonus to what is still basically a colourful excuse to have John Wick running around some fantasy criminal underworld (largely revolving around New York, but also taking in some exotic locations where Halle Berry gets to veritably prove that she might be ready for her own spin-off) whilst kicking, stabbing, throwing knives at, hacking, breaking, punching, and shooting - yes lots of shooting - hundreds of very determined enemies. Often in the head. Twice. Or three times for good measure.

It is grin-inducing excess, which, compared with any other top tier movie in any other genre may be seen as frivolous and gratuitous. But for the same reason that Endgame really deserves a near-perfect pass on any flaws in favour of it being the conclusion to a 22 movie mega-franchise, Parabellum can't really be compared to anything other than its own ilk. And as action movies go, it doesn't really get any better than the John Wick movies.