"Tell them. Tell whoever they send. Whoever they are. I'm gonna kill them. I'm going to kill them all." 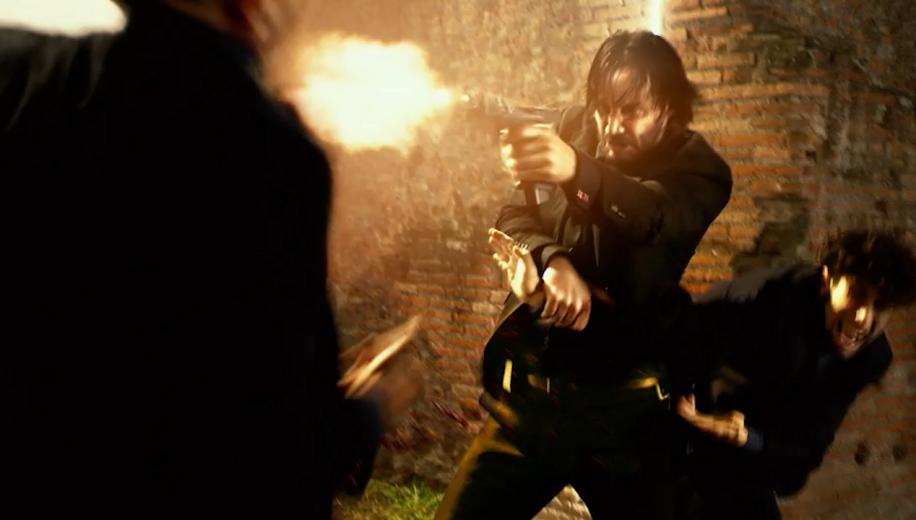 Co-director Chad Stahelski returns to helm this epic sequel, which delivers not only bigger action beats but also an expanded look at the universe hinted at in the first film. With twice the budget and a two-hour runtime to play with, the filmmakers have a lot more toys to unleash this time around. Despite the duration, it never ever lets up in the action stakes, or leaves you time to breathe let alone check your watch (come the last half hour, you'll be as exhausted as Reeves' battered protagonist). Sure, there is a slightly less fluid feeling to the proceedings - the first chapter had a very efficient narrative, and was a perfectly-designed apex predator, but John Wick: Chapter 2 is still just as punishing and relentless, painting an epic ballet of ballistic ultra-violence, whilst expanding on the colourful universe it's set within.
Of course the sequel may not convert anybody who didn't like the first entry, but it may tip those who were sitting on the fence into the 'like' camp thanks to the world-building on offer here. In many respects, it feels like a spiritual succession akin to The Raid 2's expansion on The Raid, which similarly jettisoned the simplistic efficiency of its debut in favour of epic expanded narrative second time around. Indeed fans of the first chapter - who equally appreciated the stunning action setpieces and intriguing comic book-style universe - will find all their dreams have come true with this sequel. For once a sequel that is bigger in a good way, without sacrificing quality, John Wick: Chapter 2 is a fantastic entry in what may well, one day, be looked back upon as one of the greatest action franchises of all time.

Shot digitally at 2.8K using an Arri Alexa XT Plus, unlike the first chapter, the sequel is unfortunately constrained by the limitations of a 2K digital intermediate. Although full 4K titles do not always equate to clear upgrades in terms of detail and clarity, John Wick arguably did, with a tangible uptick in resolution. Although not quite as obvious this time around, the sequel is almost as flawless as the first entry. Clarity is eminently impressive, close-ups are near-perfect and the image is lovingly textured and rich, with finer nuances clearly visible. And, despite the limitations, there's still an undeniably obvious upgrade over the 1080p counterpart.


Almost as impressive as the first chapter, the sequel looks staggeringly good

Of course the true - and very literal - highlights come in the presentation's use of the High Dynamic Range (HDR) and Wide Colour Gamut (WCG) that Ultra HD Blu-rays really use to stand apart from their HD siblings, going way beyond mere pixel resolution, and determining the very look and vibrancy of the piece. John Wick 2, as with the first film, is prime material for this, with its heavily stylised comic-book look that sees vibrant primaries, neons and strong, vivid hues of purple and red casting entire sequences in a stunning new light on this Ultra HD Blu-ray. The WCG affords noticeably richer, deeper tones, giving the Enter the Dragon homage sequences an all-new lease of life, whilst the broader range of peak whites and solid blacks affords the darker sequences yet more intimate discrete distinction. Even if the black levels aren't quite as perfected this time around as with the first entry, they're still far richer and deeper than on the Blu-ray, allowing the tunnel sequence to retain better shadow detail despite how dark things get. It's very hard to fault this presentation. Even with its 2K DI the sequel looks staggeringly impressive, and is almost as good a reference upgrade as the first chapter, leaving it a demo title that you simply must have in Ultra HD.

John Wick 2 also boasts an explosive Dolby Atmos track running off an excellent Dolby TrueHD 7.1 core. The soundtrack is every bit as impressive as the video, if not even more so. Dialogue is delivered with clear and coherent dissemination across the frontal array, but the track truly excels on the effects and score front. It's punchy but precise, a bombastic assault on your sound system, but one which makes full use of the surrounds and LFE channel.

The score retains some of the John Wick themes from first time around, with interludes at the party for some stomping beats, as well as some classical input. It's bracing and engulfing, even when the gunshots aren't perforating your eardrums. Myriad weapons provide the fuel in that respect, clearly distinguishing between the vast arsenal of shotguns, handguns and assault rifles on offer, with body blows taking the wind out of you whilst the full-on firefights decimate your living room. Much like the first chapter, John Wick 2 astounds on the aural front, even before you look into the enhancement offered by Atmos.

Unfortunately you have to turn to the Blu-ray for the majority of the extras, with the Ultra HD Blu-ray only receiving a single extra, a Commentary, unlike Lionsgate's US release. Nevertheless it's a very good selection, improving upon the first Chapter with a strong salvo headlined by an excellent Audio Commentary from director Chad Stahelski and star Keanu Reeves, who provide a wealth of background into the production, their ideas, the fight sequences and their world-building.


A very good selection of extras

On the Blu-ray we also get a whole host of Featurettes, running from 5-10 minutes and predominately looking at the fight sequences, with Retro Wick: Exploring the Unexpected Success of John Wick and reflecting on the first sleeper hit; Friends, Confidantes: The Keanu/Chad Partnership looking at the friendship between these two dating back to the days when Chad was Keanu's stunt double on The Matrix franchise; As Above, So Below: The Underworld of John Wick looking at the cabal of assassins; Car Fu Ride-Along dipping into the stunts in the opening sequence; Wick's Toolbox looking at the weaponry; Kill Count recapping the kills; Training John Wick, Wick-vizzed, and Chamber Check: Evolution of a Fight Scene all look at the fight choregraphy and effects work; and the extras are rounded off by a couple of minutes of Museum Tour with Sir Jonathan Wick (which isn't with Keanu), 8 minutes of timecoded Deleted Scenes worth checking out; and a couple of Trailers for the film including a faux trailer, Dog Wick Short.

The UK Ultra HD Blu-ray release trumps it's Blu-ray counterpart not only in the video stakes - with improvements that leave it almost as defining as the first chapter - but also in the fact that it's the reclassified 18-rated uncut version which we didn't get to see at the cinema. Couple all this with a stomping Dolby Atmos track, and a horde of excellent extras on the accompanying Blu-ray, and you have a release that's simply must-have for a film that, at least for action fans, is utterly unmissable.